© 2020 Autosport.  All rights reserved.
Previous / Williams: "Nothing has changed" in Russell's approach
Next / Ocon "happier" with recent qualifying pace

Haas has revealed that it has a problem with its rear suspension overheating, which is altering the ride height of its Formula 1 car.

The American-owned outfit has faced a challenging time this year with its Ferrari engines having had a step back in power.

But after another difficult weekend during the Portuguese Grand Prix, Romain Grosjean says that one key factor holding the team back is that its car's handling is not consistent because of the impact of the rear suspension altering as it gets too hot.

"We are struggling with the rear suspension overheating, meaning that the platform keeps [altering] and the ride height keep changing at the rear," said the Frenchman. "From one lap to the other we can pick up up to 4.4% of aero balance."

Grosjean says that as the suspension heats and then cools, the ride height moves around - and the team has not found a solution to the problem yet.

"It gets hot at the end of P3, it gets a ride height, and then it cools down and then you start qualifying with a different one," he added.

"Then every lap the rear suspension heats up and the rear ride height changes. Normally, we're struggling a little bit, but this weekend the magnitude is twice bigger. And we've got no idea why."

As well as the ride height issue being a problem for setup, Kevin Magnussen said it also made things difficult for the drivers. 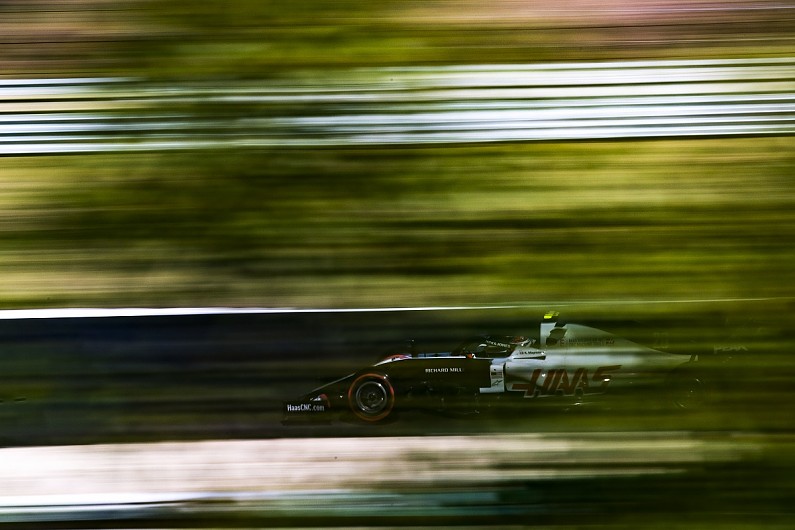 "It's been an issue for a while, and it's tricky because it changes the behaviour of the car in an unpredictable way," said the Dane.

"It basically means every time you go out there's a different rear ride height. It's one of those issues that needs improving."

Grosjean said one of the big consequences of the problem is that there is no certainty of what level the car will be running at.

"I feel really for my engineer, my race engineer, because they roll the dice and they decide which flap are we going to go on. But we never know where it's going to end up.

"We've had the issue a bit all year long, but this weekend has been for some reason really exaggerated. So, we're struggling with that. The car is never the same one lap to the other."

Team boss Gunther Steiner said Haas had tried some solutions in Portugal to try to improve matters, but it does not look like they have worked.

"We have this issue since the beginning of the year, and it took a few races to understand it," he said. "We tried a few options to cool the system and I don't know how much it was today, how much difference it makes.

"Sometimes it seems to be working better. And I think we brought some new parts to this race. And I guess they don't work as written on the box. So, for sure we keep on working on it."