Ferrari is "very likely" to wait until Abu Dhabi before handing Mick Schumacher and Callum Ilott their next Formula 1 practice run-outs after wet weather cancelled their planned debuts.

Ferrari Driver Academy members Schumacher and Ilott had both been due to make their first F1 race weekend appearance on Friday in opening practice for the Eifel Grand Prix, driving for Alfa Romeo and Haas respectively.

But rain and fog meant the medical helicopter was unable to take off from the Nurburgring, preventing any running taking place in the session and dashing their hopes of getting out on-track.

Both Schumacher and Ilott now look set to wait until the season-ending Abu Dhabi Grand Prix in December to make their F1 practice debuts, with the roster of upcoming tracks complicating practice running for teams.

All of the next three races are taking place on tracks that have not hosted F1 recently - Algarve, Imola and Turkey - while Imola will also take place across only two days.

As a result, Ferrari F1 boss Mattia Binotto does not expect to be able to reschedule their planned running until the end of the season.

"It's obviously a shame for them, it would have been a great opportunity here to make their debuts in F1," Binotto said. 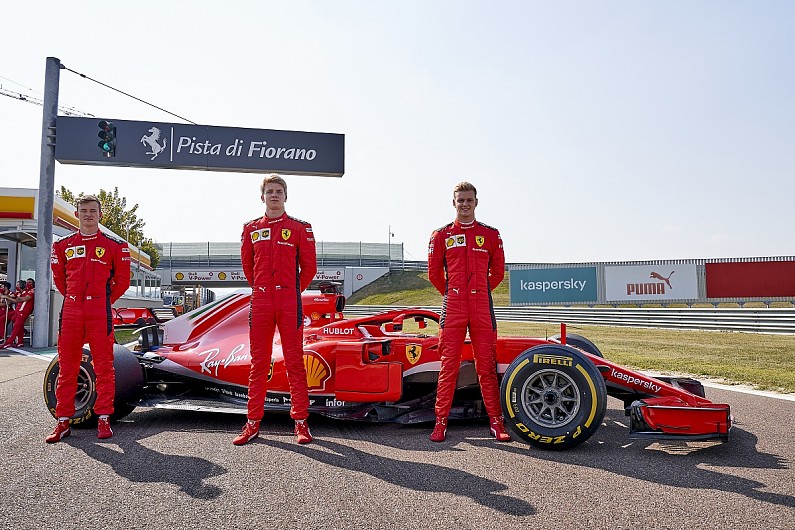 "Obviously we may try to re-arrange in the next races, but it will be very difficult.

"I think the next one, Portimao, a new circuit for everyone, for F1, so I think our top drivers will need to practice as well.

"We've got Imola, which is only a Saturday and Sunday, and then to Turkey again, new circuit.

"And then it's Bahrain, where they've got their F2 races, and to conclude the championship, so they need to be focused.

"Very likely the next opportunity now will be Abu Dhabi and not earlier.

"Obviously it's a missed opportunity, but again, we have no choice."

Should Ferrari run either Schumacher or Ilott with Alfa Romeo in Abu Dhabi, it is likely to have a knock-on effect on another of its juniors, Robert Shwartzman, who had been due to take part in practice at the Yas Marina Circuit.

Schumacher and Ilott currently sit first and second in the F2 standings with two rounds remaining in Bahrain, taking place in support of the Sakhir race weekends at the end of November and in early December.