Lance Stroll says it was "ridiculous" that Charles Leclerc wasn't penalised for their first-lap contact during the Russian Grand Prix, which resulted in the Racing Point driver crashing out.

The Canadian was on the outside line heading into Turn 4 on the opening lap, with Leclerc to his inside, when they touched on corner exit and the Racing Point was spinning backwards into the wall.

The incident was noted by the stewards, but no further action was deemed necessary. Leclerc went on to finish sixth for Ferrari, but speaking afterwards to Sky Sports F1, Stroll was critical of the decision not to penalise him.

"I'm quite surprised he didn't get a penalty," he said.

"I gave him plenty of room, I did the whole corner on the outside, and he just tagged my right-rear. I gave him all the room I could and it was unlucky.

"But he could have avoided it, he didn't have to run so wide into me. It's kind of ridiculous he didn't get a penalty."

Leclerc said he had understeered into Stroll due to the loss of grip behind his Racing Point team-mate Sergio Perez.

The Mexican enjoyed a strong run to fourth place, with a 23-lap opening stint the longest of all the drivers who started on the soft tyre.

Asked what he thought would have been possible, Stroll said: "I think a lot was possible.

"I think we were seventh at that point, I had a great start, we were on a good tyre so it's a real shame." 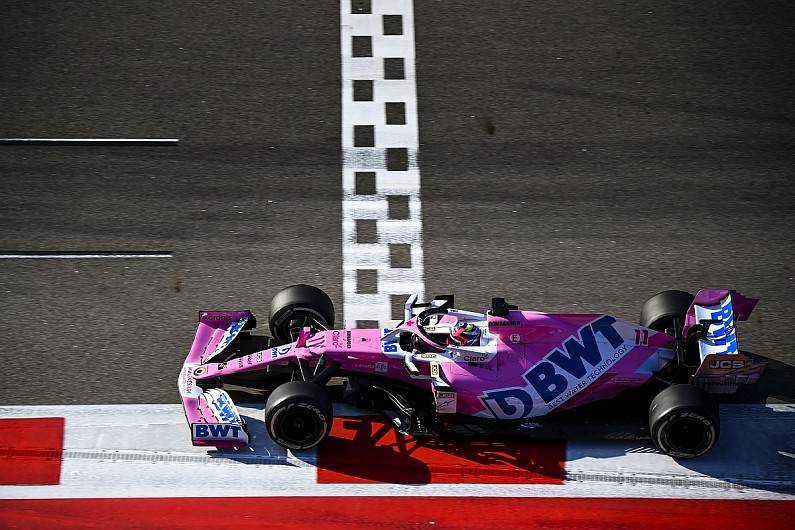 Perez's strong tyre management on the softs helped him to make up for a bad start where he dropped behind both Renault drivers before recovering to the position he qualified in.

"Apart from the start, everything was good," he told Sky.

"That side of the grid was totally no grip at all, as soon as I released the clutch I went straight into wheelspin, I lost the position to the two Renaults.

"Luckily I think we did very good management on that soft tyre in the first stint and that basically made our race."

Perez also overtook Daniel Ricciardo on-track at Turn 3, saying he thought "there was only going to be one shot at it".

"I saw he was struggling with his tyres and it was important to get him by soon. And it worked well, I'm pleased," he added.

Perez said fourth place was "the maximum we could do" and said he was hopeful that updates to his car for the Eifel GP - which Stroll was able to run in Russia - would help the team to "be in the mix for the podiums".