Ferrari is hopeful that its Russian Grand Prix upgrades are a "small step" that will help it to move away from its "rock bottom" performance in Formula 1 in 2020.

The Italian outfit arrived at the Russian GP with a small batch of remedial updates for the SF1000, having identified aspects of this year's car that can be tuned to compensate for some of it inefficiencies. A larger pool of parts expected in the coming races.

The biggest and most visible of these updates takes inspiration from Mercedes, with its latest update to the rear wing utilising an upper rear cut-out with serrations (red arrow) that alters the vortex formed at the wing tip.

This was a solution that first featured as part of the extensive upgrade package that Mercedes introduced in Germany last season. It has subsequently been assimilated by Racing Point and Red Bull.

The endplate is also much thinner in the rear section in order to accommodate much thicker up-wash strikes (blue arrow), whilst the hanging portion of the endplate now only features three sections, rather than the seven used previously. 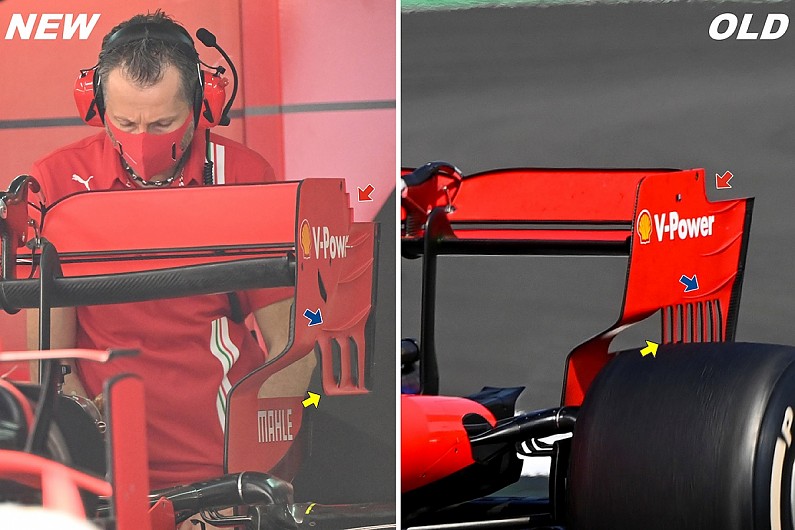 Ferrari sporting director Laurent Mekies said that he hoped recent difficult races were "rock bottom" for the team - and that now it could work methodically to improve.

Asked if the rate of progress this season had been as quick as hoped, Mekies said: "The trajectory was not certainly as wanted, probably otherwise we would not have been in that situation.

"We hopefully have hit rock bottom, which means that it didn't go the way we wanted at all.

"But I think we are very conscious and very aware of what we need to tackle and where the weaknesses are.

"These new parts are not going to bolt on lap time on the car, but they are a step to understanding if we're able to alter the characteristic we don't like at the racetrack, and that's what we have to very carefully test .

"It's one of the many small steps that will be part of our hopeful recovery road."

Mekies expects further small step upgrades to be tried at forthcoming races, as he admitted there was no instant fix to the SF1000's performance problems.

"We have a few things on the car that comes as a reaction to having identified where we feel we need to improve, and there is a bit more to come next week [at the Nurburgring]," he said.

"Again, as I said, it's not straight lap time items. It's items to indicate that we are working on the right things with our car characteristic.

"So, hopefully it's the beginning."