© 2020 Autosport.  All rights reserved.
Previous / Bottas "not sure how happy Red Bull is" on party modes
Next / Verstappen doubts party mode ban hurt at Monza

Lewis Hamilton says his Mercedes team had "bang on" tactics to avoid getting caught up in qualifying traffic chaos at Formula 1's 2020 Italian Grand Prix, where he claimed pole.

The final runs in Q3 for the 2019 event at Monza were blighted by farcical scenes where the top 10 runners jostled for position to avoid running without a tow - an issue that also occurred in FP3 and Q1 this year.

But the Mercedes squad sent Hamilton and his team-mate Valtteri Bottas out with over five minutes of Q3 remaining for their final runs, which meant they ran at the head of the field as the pack scrambled out of the pits behind them.

When asked if Mercedes had changed its approach, as usually the teams prefer to run as late as possible in qualifying to get the best of the track conditions, Hamilton said: "Not really.

"I think we learned from last year in terms of going out at the end wasn't the best for us.

"The strategy team did a really great job in terms of the timing.

"It's something we discussed yesterday and again today. Ultimately I think it was bang on."

Hamilton also discussed the impact of the tow, which all teams other than Mercedes attempted to secure for their drivers, but the world champion felt the difference between having it and running in clean air was minimal.

"There's a very, very close [time gap] between having clear air and being in the tow," he explained.

"[I] can't really tell you which one is best. 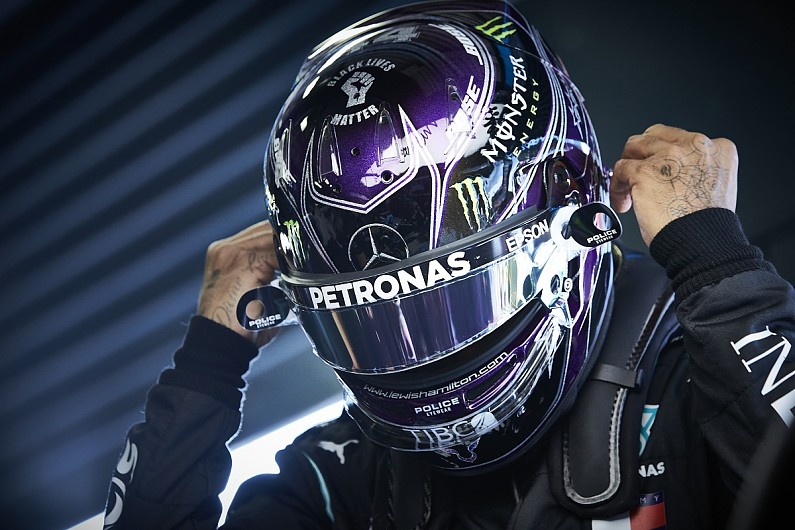 "I think some people would tell you being in a tow is best, but you lose out in the middle and the last sector.

Hamilton ended up 0.808-seconds clear of Carlos Sainz Jr, who qualified third for McLaren, on the first weekend since the new technical directive came into force requiring cars to run in the same engine mode for qualifying and the race.

Hamilton said he "didn't expect" Mercedes' gap over the rest of the field to be so big, but explained he does not "come into weekends with an expectation of how much of a gap we're going to have".

He added: "But of course I don't really understand it.

"We did say last week when they brought in this rule to slow us down that it wasn't really going to make a difference, because we've got a great, great car, and we'll be better in other areas.

"[It's] just an incredible performance this weekend. I think this is definitely the best we've ever been here, [we] just really got the car in a sweet spot for this weekend.

"A huge thank you to all of the guys back at the factory for the simulations, for working on getting parts to these races, and continuously stepping forwards.

"It's such a hard thing to do, and I think people take for granted because we do it weekend in, weekend out.

"I'm really happy with the laps. They're not really anything on the last one that I did, but nonetheless."