Lewis Hamilton finds the saga surrounding Formula 1's ban on qualifying engine modes "amusing" as he questions the real reason for the change.

From this weekend's Italian Grand Prix, the FIA has outlawed teams from using any special 'party modes' to boost engine power for single laps in qualifying.

Instead, teams will have to run with consistent modes throughout qualifying and the race.

While the FIA stated that it was imposing the ban because it wanted to be more confident about its policing of what teams were up to with engines, Hamilton said he is intrigued about politicking from other teams.

"I find it kind of amusing because the FIA said that it was so they could manage everyone's usage of the engine or something like that," explained Hamilton ahead of the Italian Grand Prix.

"And then Red Bull came and said: we were the ones just pushing for it. So it's just completely different reasons why they did it."

Hamilton and team-mate Valtteri Bottas are both convinced that, while the ban will impact their team, they think the difference will be minimal.

"I think naturally we lose a little bit," added Hamilton.

"But it's not the end of the day. So I think everyone potentially would lose something but maybe some more than others. And no one particularly knows I think."

Bottas backed up the view that the change will free up better engine modes for the race, as the engines would not be so compromised on reliability by having to run at full power in qualifying.

"I think in qualifying, honestly there is going to be a small difference," said the Finn.

"It's not huge. But then in the race hopefully, it seems like we are overall going to have a better race time with a decent mode all through the race." 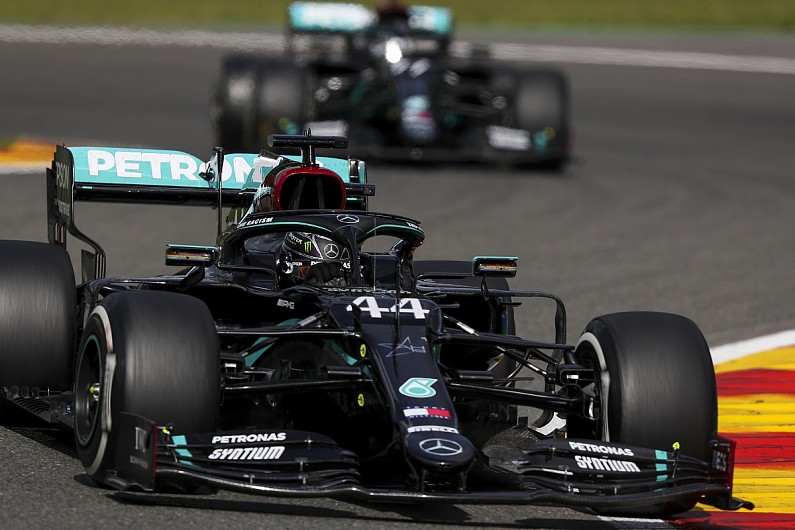 Williams driver George Russell reckoned anyone hoping for the engine mode ban to hurt Mercedes would be in for disappointment.

"If anything it's only going to help them even more in the race, so the whole idea of trying to slow them down is actually going to go complete the opposite way," he said.

"It's only going to enhance their performance.

"I think on a Saturday it will probably compromise us a tenth of two, but we expect it to also compromise the other manufacturers a tenth or so.

"So we are probably a net one tenth down on a Saturday.

"But on a Sunday we're definitely net up by a big margin.

"And I think what Mercedes has done to improve the engine to allow us to run a very high engine more for the whole race is really impressive and she's going to be flying on the Sundays."

Racing Point's Sergio Perez reckoned, however, there was a risk of more engine failures this weekend as the result of teams perhaps pushing harder in the races.

"We don't know how hard the others can run their engines in the race, we will see," said the Mexican.

"I think certainly it's going to hurt us a bit in qualifying.

"And it's to be seen how much we are able to gain back in the race compared to others. It's all relative.

"So I think it's just a matter of waiting for this weekend.

"This track is very hard on engines, so there might be some engines blowing up out there this weekend.

"So it will be important to make it to the end. And it will be very interesting to see the differences across teams."