Daniel Ricciardo says his Renault Formula 1 boss Cyril Abiteboul should now be 'pretty nervous' about losing a bet they have on getting tattoos.

The pair have agreed to get matching tattoos if Ricciardo finishes on the podium for Renault before he leaves the team at the end of this year.

Having delivered a strong fourth place finish in the Belgian Grand Prix, Ricciardo believes his car can be even stronger in this weekend's Monza round.

Asked by Autosport how worried Abiteboul should be about getting his first tattoo, Ricciardo said "I think pretty nervous. I've just seen him now. I told him to stay alert over the next seven days.

"At least last year, Monza was an even stronger circuit for us: and if we are stronger there's only a podium in front of us.

"I'm not getting ahead of myself, or the team isn't, but I think we can go to Monza with confidence and aim high."

Renault's performance in Belgium came as the result of its car being much more competitive against its rivals in low-downforce configuration than it is when more wing is needed.

Ricciardo even reckons that had he not lost time behind Pierre Gasly and Sergio Perez after the early safety car in Belgium, that he could have challenged Max Verstappen for the podium already.

"I think if the strategy of Gasly and Perez didn't put a buffer between Max and myself, I really think I could have ran with Max for that last stint," he said. 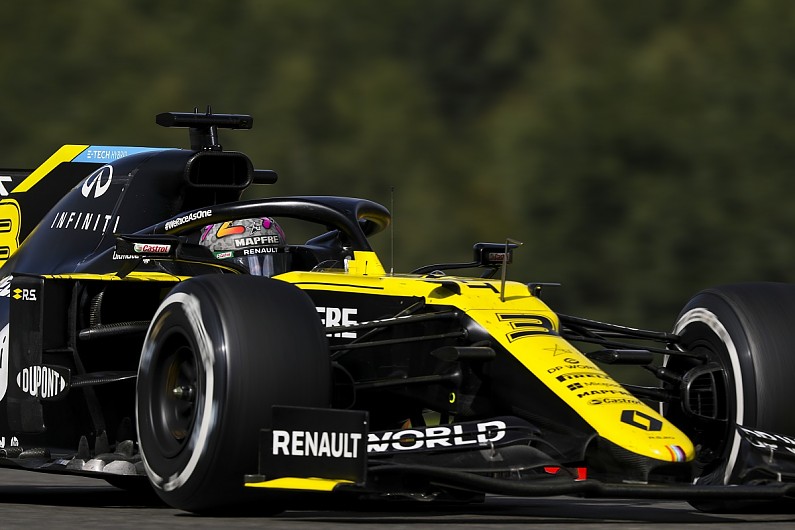 "He pulled away because obviously we lost time with the different strategy, and then we reeled a big gap in towards the end. So Monza, all going well, we should be pretty competitive."

With Renault having had some mixed results so far this year Ricciardo admitted he never expected to be threatening a Red Bull the way he did on Sunday.

"It was certainly surprising," he said. "I knew we would have a decent car. But when I heard the lap times, and that the Mercedes was dropping off tails, I thought okay, maybe everyone's just saving their engines.

The details of the podium/tattoo bet are that Abiteboul can choose the location of the tattoo while Ricciardo can choose its design.

Speaking about what his plan was, Ricciardo joked that he had already seen some photoshopped images of Abiteboul with a face tattoo like Mike Tyson.

"I saw some mock ups of the Tyson face tat on Cyril," he said.

"But I think he chooses the placement, so it's definitely not going to be on his face!

"I wouldn't be cruel and get him like a rubber duck or something.

"I'll get him, I think, something so it's a good memory, so I guess maybe the destination where the podium happens.

"So something to do with that, whether it's that circuit or that city in that country. We'll see.

"Or a shoe maybe, a shoey. We will cross that bridge when we get there, but I am sure I will be flooded with ideas."