Ultimately the strategy ensured that Hamilton got ahead of Bottas to claim second place in a late race battle, although both Mercedes drivers lost out to Max Verstappen who used the alternative strategy to charge to victory for Red Bull.

As the leading W11 on the road, Bottas was given priority at the stops and after a stint on the hard tyre he made his second stop on lap 32.

Instead of coming in a lap later - as was the case at the first round of stops - Hamilton took his hard tyres all the way to lap 41, and at one stage the reigning Formula 1 world champion was hoping that he could reach the chequered flag without a second stop.

Wolff says the team was able to examine the tyres that came off the car of Bottas, and having decided that there was still some life in them made the call to leave Hamilton out for as long as possible.

After the race Bottas said that his team was "sleeping" on strategy, a suggestion that Wolff refuted.

"I just spoke to Valtteri," Wolff said when asked about his driver's comments. "I don't think we were sleeping, but I accept his perspective. I think we just had the slower car today, and we just admit that.

"His point was should we have done the opposite to Max. As a matter of fact, this wouldn't have changed anything, because Max would have come out with a fresh tyre, and we would have continued with a tyre that wasn't in the best state any more, and he just pitted in front of us. So not sure what we could have done better.

"Obviously he's not in a happy place that he was P2 and Lewis was P3, but it was the learning that happened on-track when we got Valtteri's tyre in, we saw there was actually a lot of rubber left, and we extended Lewis's stint, albeit that there were big vibrations but a lot of rubber. 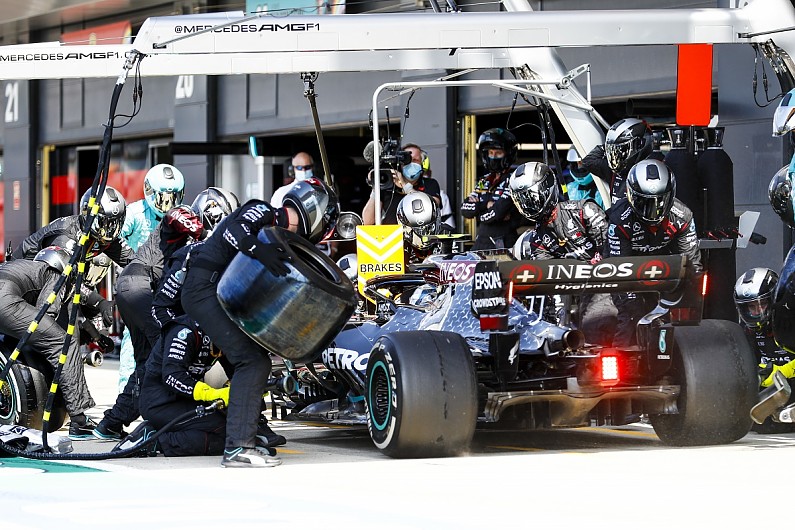 "Therefore, he was getting quicker and quicker, the more the rubber went down, and that is why we could extend the stint, and eventually Lewis overtook Valtteri. It's clear he's not happy, and I totally respect that. None of us are happy today with the result."

Wolff insisted that a combination of factors had led to Mercedes struggling with the tyres in the race.

"I think we had indications in the past that our relative gap was not as large to our competitors when it was hot," he said. "It's a little bit simplistic to just say it's hotter.

"It comes down to the fact that we have a car with high downforce, and obviously when conditions change, parameters change, like temperatures going up, compounds getting softer, pressures going up, we have to acknowledge that the Red Bull is a pretty fast car, and that's what we have seen today.

"We have these days in the past, and came out stronger, and I'm really looking forward to Barcelona.

"We have a handful of days to assess, come up with solutions, test them on the Friday in Barcelona, and then hopefully have a better race on Sunday. These days where we lose are the days where we learn the most."