Kevin Magnussen retired from last weekend's race with a dramatic brake failure just before half-distance, while Grosjean was later forced out by the same problem.

This followed Grosjean losing much of the first practice for the 2020 season with a brake failure - with the team also appearing to have brake difficulties during winter testing - and significant issues regarding car handling during the previous campaign.

When asked about if the issue echoed Haas's past car struggles ahead of this weekend's Styrian Grand Prix at the same Red Bull Ring venue as last weekend's event, Grosjean outlined the situation and explained the team has "one more emergency step" to try regarding a fix.

"It's very different from what we encountered in the past - [last weekend] with brake temperature issues," he said.

"Yes, it was temperature-related, and obviously our cooling hasn't been efficient enough - especially into traffic.

"So, yes we are looking at different options to get the brakes under control - it's never great starting a race knowing that you need to lift and coast to save the brakes by lap two.

"So, yeah - I think the boys have been looking at as many options as they could [for a fix this weekend]. 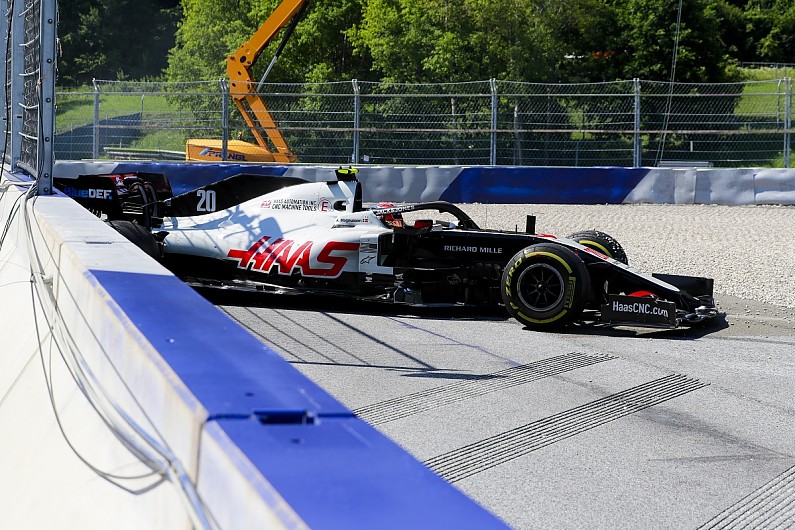 "We have one more emergency step, I believe, in the pocket. But I guess tomorrow morning and afternoon [in practice] will be focused a lot on getting those temps under control."

Magnussen explained that Haas had had no prior warning of the race-specific brake problem during the initial running last weekend.

"In the race obviously I was getting told to do a lot more lift-and-coast than we had planned for and so I kind of knew there was some kind of problem," he said.

"So yeah, I had a little bit of a warning in the race, but not before that."

Grosjean also said he was "not too concerned" about the brake issue causing potential problems for Haas's drivers when it comes to trusting the VF-20's behaviour.

"[Confidence starts] with the first lap in free practice one - where we had a brake failure [last weekend]," he explained.

"So, seven-eight months out of racing it was a bit of a non-good start.

"But the boys have been working as hard as they can and I've got confidence that at least for quali and short runs it will be absolutely under control - long runs we need to look at every option that we have.

"If you know that the first lap everything is under control, and it's all braking as it should, then you can just build from there."