A Formula 1 car is a complex piece of machinery with teams funnelling hundreds of millions of dollars into producing the most advanced car on the grid.

In this quest for speed an F1 team's factory never stands still, working year-round to improve every part of the car from the front wing to the diffuser, coming up with increasingly complex designs to find that edge.

Without a fistful of engineering qualifications to your name, the finer points of how an F1 car works can be hard to grasp. But with simple explanations of the key areas, anyone can understand the basics of what goes into making an F1 car fast.

The front wing is one of the most important parts of an F1 car. As the first part of the car to come into contact with the oncoming airflow when the car hits the track, the front wing is fundamental for the car's aerodynamic performance.

A well-designed front wing will improve the all-round performance of a car - but if a team gets it wrong, it will have to try to recover the damage and compensate with the rest of the car.

Although the front wing has to create downforce of its own, it also has to work the airflow around the front tyres to reduce the amount of wake left behind it.

If it manages to do that, the rest of the car is able to benefit tremendously, improving other areas such as the floor and the diffuser. 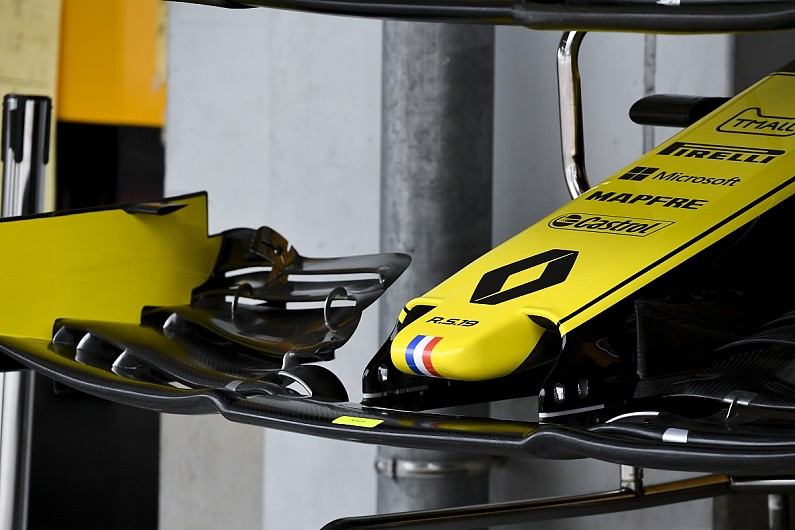 The central section of the front wing has to have a 500mm-wide neutral section on all the cars. The tips of the wing elements create a vortex that helps to improve the quality of the airflow all around the car, feeding the diffuser as well as working to stop the negative drag created by the front tyre.

Every little detail on the wing works to send the airflow outside of the front tyre and away from the underside of the car.

The endplates stop the high-pressured air on top of the wing from spilling underneath, increasing the level of downforce produced. They are also used to guide the airflow around the tyre and the attached footplate develops a vortex, which also helps to divert the airflow.

For 2019 the front wings were widened to two metres wide and a tightening of regulations meant that designers had to be much more restrained in their ideas compared to the previous few years.

The idea behind the change was that with a less effective airflow around the car, closer racing could occur on track. 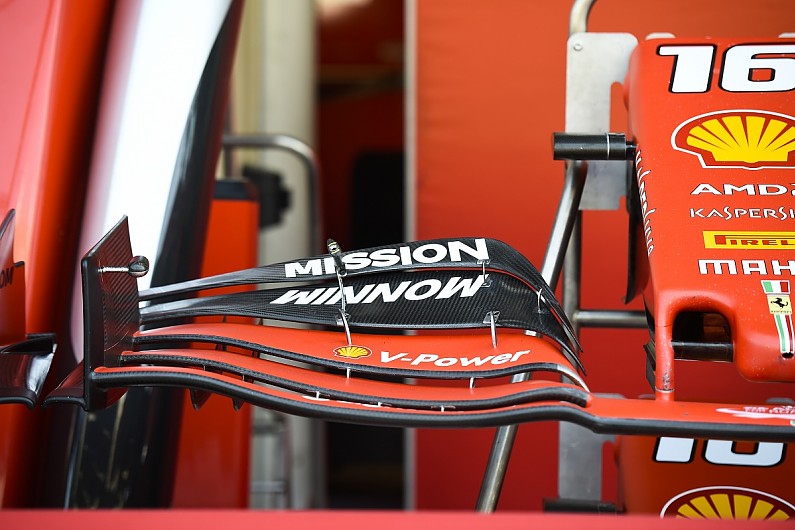 The drag reduction system (DRS), introduced in 2011, is the device that allows part of the rear wing to open up on a straight.

When activated, the system lifts the leading edge of the wing up by 70 millimetres to create a much larger slot gap - and reduces the frontal area of the car. This means that the car has less drag, providing a boost to the top speed.

The system contains an actuator mounted on the rear wing which is connected to a linkage, which lifts the wing up or down almost instantly.

Usually when the driver lifts off the accelerator the DRS closes off automatically and the airflow reattaches to the rear wing, ensuring that the driver gets their downforce back.

Before 2017, the rear wing was much taller and narrower but the regulations change left it longer and considerably wider. 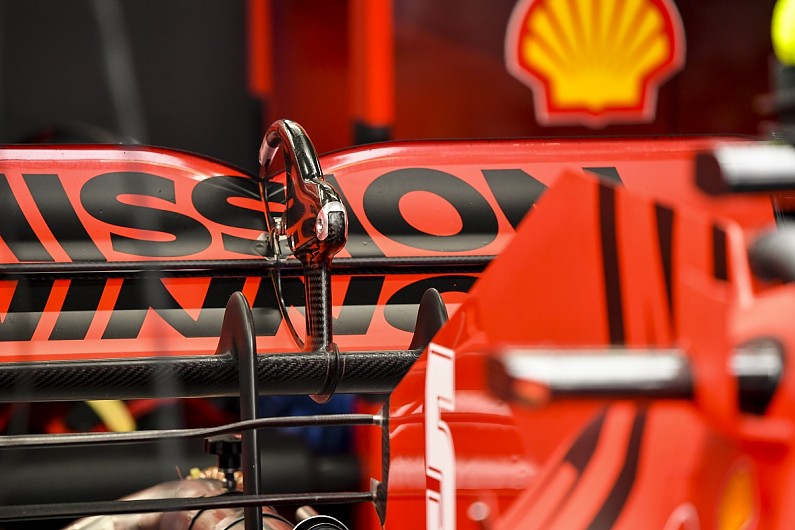 For 2019 the wing underwent another substantial modification. The new rules made the rear wing taller again and the flap size increased by 20mm, making the use of DRS much more effective in an attempt to improve overtaking.

Around a circuit there are several DRS zones, usually on the longer straights, where the system can be activated.

When a driver is less than a second behind a rival on track, they may use DRS to try and overtake the car ahead.

However, DRS isn't a guarantee that an overtake will occur, with examples of drivers remaining stuck within DRS range for lap after lap littering F1's recent history.

The driver with DRS has a lot to consider, such as braking point and positioning the car to make sure they are well-placed to leave the corner ahead of the leading driver. 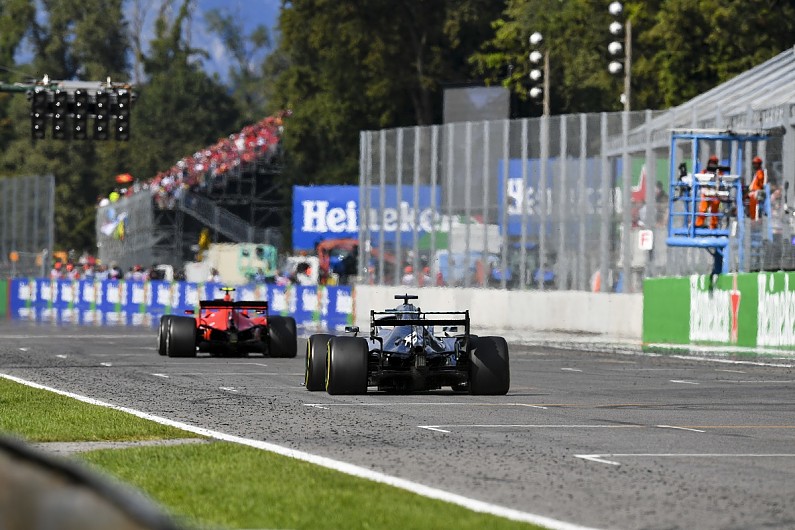 The sidepods play an important part in packaging the car as tightly as possible, housing the radiators and manifolds compactly, minimising drag.

The main radiator inlets are positioned on either side of the car and must accept enough air to provide sufficient cooling to the power unit.

Without enough cooling the engine and its other components are liable to overheat, losing performance and potentially failing.

The inlets have to be carefully designed to be as efficient at cooling as possible while remaining as small as possible, and must also be positioned to be fed with the maximum amount of clean air.

The deformable safety structures, positioned on either side of the cockpit, are a very important part of an F1 car. 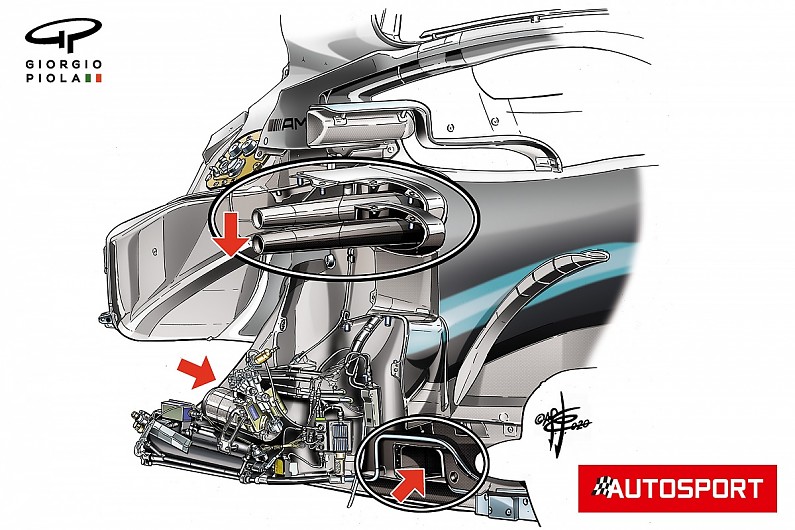 Until 2016 the deformable structures were situated at the front of the sidepod and the length was mandatory, with dimensions fixed for every car.

By 2018 most teams were following the trend of separating the deformable structure from the length of the sidepod, with the sidepod around 15cm shorter than the crash structure.

As a means of reducing drag, this is a better distance from the front axle, helping to prevent the negative influence of the airflow from the tyre and thereby improving cooling.

Since the early 2000s the sidepods have also featured a distinctive undercut around the bottom, channelling airflow around the top of the floor in a streamlined fashion to shorten its path.

This airflow can also be used around the edges of the floor, effectively providing a seal. The sidepods also open up at the rear in order to expel any hot air and teams often flare these openings up at circuits renowned for their high temperatures.

The diffuser is the flared opening at the rear of the floor and is the part of the car responsible for generating the most downforce from the underside of the vehicle.

Airflow is accelerated under the floor where it creates a lower pressure area, thus generating downforce as the higher-pressure air on top of the car pushes it downwards.

As the diffuser opens up the airflow accelerates further, creating an area of lowest pressure underneath the floor.

This airflow is then drawn into the diffuser space, expanding to make a transition zone from the fast underfloor velocity to the ambient velocity surrounding the car.

The diffuser has to be carefully shaped to ensure no separation of airflow as it exits the space under the car, which can significantly reduce the effectiveness of the overall floor. 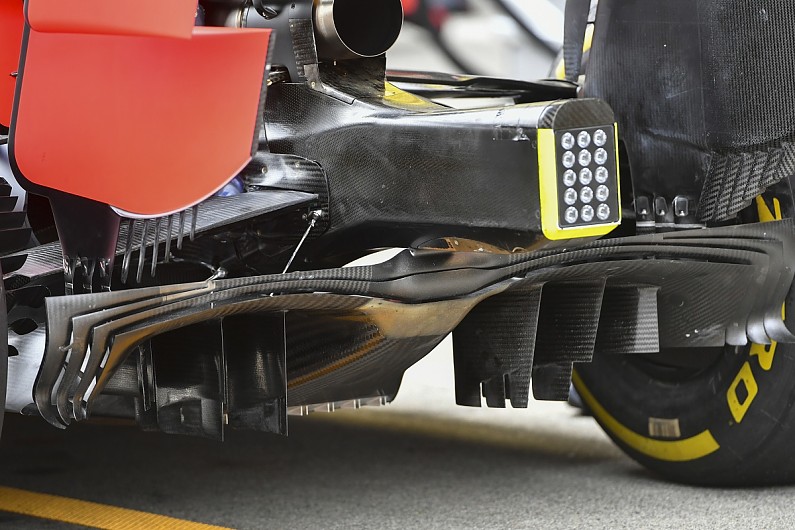 Turbulent air flowing under the floor can also damage the performance, creating pockets of higher pressure which can upset the stability of the car's underbody.

The diffuser area is another part of the car that has been revised in recent years. Until 2017, the rules curtailed the varying designs of the diffuser but since then designers have been able to play with not only the vertical strakes on the diffuser and the shape of the diffuser itself, but also the area around the tyre to improve the airflow.

It is imperative that teams maximise the gains on offer from the diffuser, and understand how the airflow leaves the diffuser area in order to minimise the trailing drag produced by the car.

The edge of the diffuser comes equipped with small winglets around the top of the surface and inside the diffuser there are strakes which create vortices to further develop the low-pressure zone under the floor.

Together with the rear wing, these pieces are responsible for creating as much downforce as possible for the car. 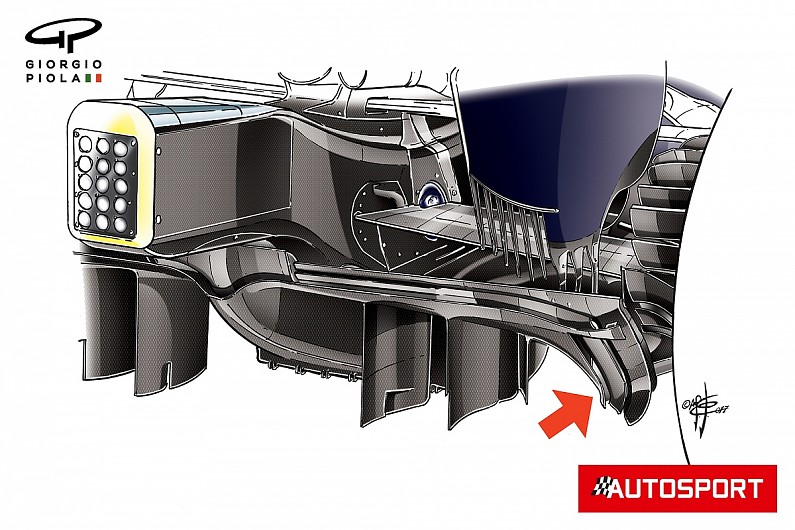 The suspension is the link between a car and its wheels, dictating how it reacts to the road and to the driver's inputs.

On a F1 car, teams are allowed up to six structural members per wheel, typically made up of two double wishbones, the pushrod or pullrod and a steering arm or track rod, depending on if it is the front or the rear suspension.

When the wheel moves up in response to the track, the spring is pushed into compression by the pushrod. A pullrod will be mounted in reverse and the preference between the two is simply a result of a car's packaging.

Most set-up work done on an F1 car will be to the suspension and teams can make changes to the camber, toe, spring rates, ride height and a whole host of other properties to suit a certain track.

Tyres also act as part of the car's suspension and have to be considered when designing the car. Different compounds have different properties, and it is not unusual to see a car's suspension responding better to certain compounds than others. 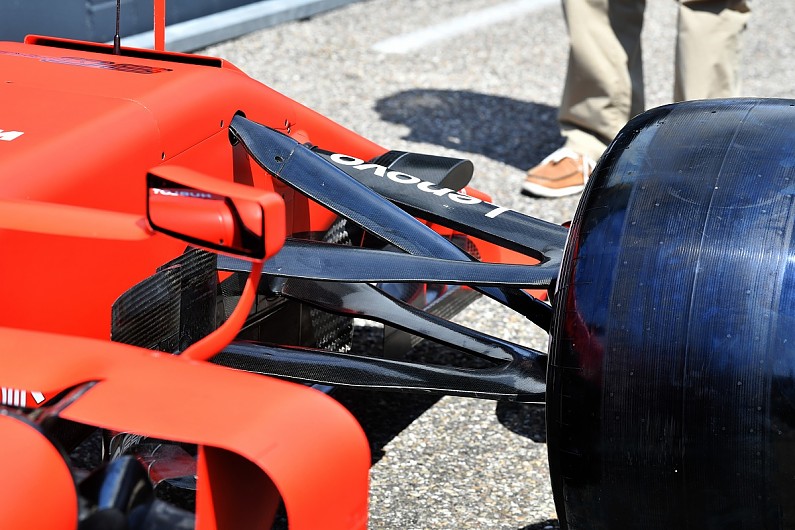 The suspension is also an integral part of the aerodynamics of a car. The steering lever is often within the top wishbone to have a neutral influence on the car and to improve the airflow to the rest of the car.

The lower wishbone is usually very high so that the two wishbones are very close to better direct the airflow to the rest of the car.

Suspension design has advanced significantly throughout F1 history. McLaren's 1969 contender - the M7C - had incredibly basic suspension with just a spring damper connecting the wishbones and little wiggle room to adjust the set-up for different conditions.

By the time that the M19C came along in 1972, suspension design had already become more complicated.

Instead of a simple damper spring unit projecting out of the car, the system had been moved inboard and was connected with a rocker - and the quite sophisticated rising rate system of linkage had been introduced.

This allowed the engineers to customise the compression of the suspension and meant the car could be set up in different ways.

Suspension design has come on an incredibly long way in the intervening years and today it is far more technical than it ever used to be - not just serving a suspension purpose, but an aerodynamic one as well.