One of Formula 1's greatest-ever wet races, the 1998 Belgian Grand Prix was jam-packed with incidents, drama and - in the case of the Schumacher brothers - flaring tempers as both watched their chances of victory crumble for very different reasons

Few races in the last 25 years of Formula 1 can attest to providing the same kind of drama the 1998 Belgian Grand Prix offered.

From the huge start-line pile-up to the shock 1-2 for Jordan, there are many, many moments that make the race stand out.

But it was also the day the Schumacher brothers would both go to war, left aggrieved after feeling they had each been denied a potential victory.

Michael Schumacher arrived at Spa hoping to take another bite out of McLaren driver Mika Hakkinen's lead, having cut the gap to just seven points with victory in Hungary two weeks earlier.

Hakkinen hit back in qualifying by taking pole position by one-tenth of a second, locking out the front row for McLaren ahead of team-mate David Coulthard. Schumacher could only manage P4, as Damon Hill grabbed third on the grid for Jordan.

Torrential rain on race day forced the field to fit full wet tyres and brace for a possible race of attrition through the Ardennes forest. The title contenders knew there was plenty to lose in the tricky conditions - but Hill sensed a big opportunity. Before the race, he ordered a team huddle with his crew, a crowd of yellow bodies bunching together as the rain continued to hammer down.

Eddie Jordan told Hill it was "the most significant thing that I remember you doing for me" in The Unlikely Lads mini-documentary. "You said listen, the forecast is really poor, we have a great chance here. You gave us the inspiration, the belief, you made us believe that we could - if we got everything right, made no mistakes - win this race. 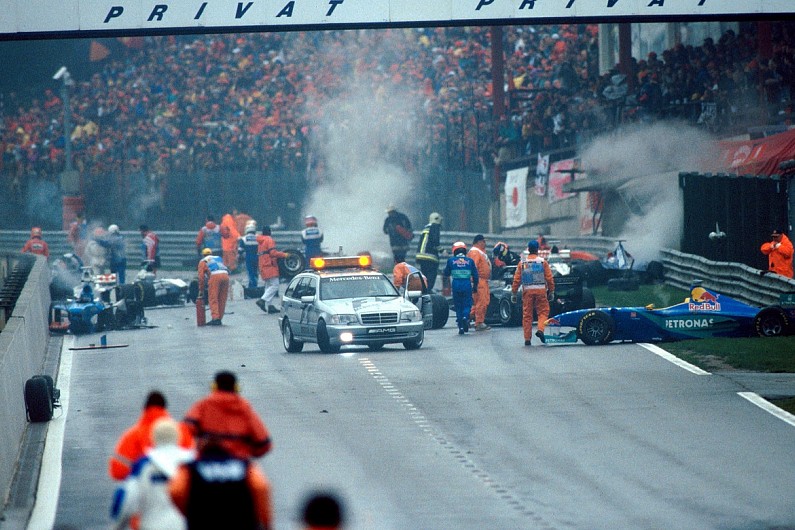 "I shall never forget that, because it turned out to be exactly right."

Hill was slow to pull away in the damp conditions, slipping down to seventh on the short run to La Source. But he crucially managed to avoid the chaos that quickly unfolded after Coulthard hit a metal drain cover, causing his McLaren to spear across the track and into the wall on the downhill sprint towards Eau Rouge. It triggered one of the biggest accidents in F1 history that involved more than half the field, prompting the race to quickly be red flagged.

"You said listen, the forecast is really poor, we have a great chance here. You gave us the inspiration, the belief that we could, if we got everything right, made no mistakes, win this race" Eddie Jordan to Damon Hill

The rules at the time meant the start was voided, allowing the drivers involved in the accident to rejoin the race and use their spare cars if required once the track had been cleared. After more than an hour's wait, the race restarted, the rain still falling. Hill sat out the wait in his car, not wishing to break his focus.

The second start was cleaner, but not without incident. Hill made a sluggish initial move from his grid slot before finding the grip to place his Jordan alongside polesitter Hakkinen, before swinging around the outside to move into the lead at La Source.

Hakkinen was tentative under braking, allowing Schumacher to try a similar move on exit. While trying to force his title rival wide, Hakkinen spun his car before being hit by the unsighted Johnny Herbert, ending the Finn's race immediately.

To make matters worse for McLaren, a tangle with Alexander Wurz had left Coulthard in the gravel on the opening lap, but the Scot was able to haul his car back onto the track. He remained in the race, albeit now running far down the order.

The safety car was soon called to allow Hakkinen's stricken McLaren to be retrieved, giving Hill the chance to settle his nerves at the head of the pack. It was the first time he had led a race since his near-miss for Arrows in Hungary one year earlier, and had two red Ferraris filling his mirrors through the spray. 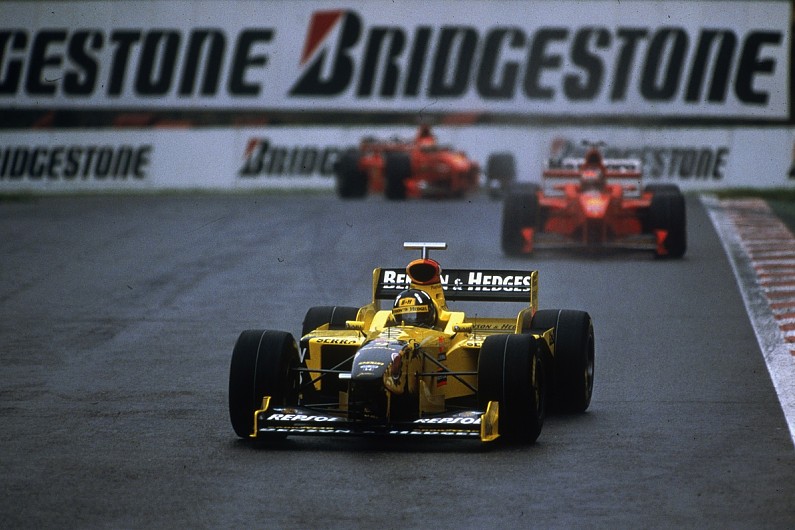 When the race resumed, Hill knew it was a matter of time before Schumacher made his move, eventually losing the lead on lap eight. Schumacher was then able to put over a second per lap on Hill as he waltzed through the spray, putting him 37 seconds clear with 20 laps to go. Victory and, importantly, the championship lead were his for the taking.

But then came Coulthard's accidental intervention. The McLaren driver was hobbling around in ninth after being passed by Arrows' Pedro Diniz, struggling to stay on-track. "I couldn't see a thing, and I radioed to my team to let me know when Michael was right behind me so that I could move over," Coulthard wrote in his autobiography, It Is What It Is.

As Schumacher neared, Coulthard moved to the right and lifted off to allow him past on the downhill run to Pouhon - only for Schumacher to slam into the rear of the McLaren. Coulthard later revealed the impact had been 137 mph, enough to tear the nose and front-right wheel off Schumacher's Ferrari, as well as leaving Coulthard without a rear wing.

Both cars made it around the rest of the lap before coming into the pits nose to tail. The McLaren mechanics set about repairing Coulthard's car, but soon found themselves joined in the garage by their colleagues in red, who were trying to restrain a fuming Schumacher.

"I still had my helmet on by my parked McLaren when I saw Michael storming into our garage," Coulthard wrote.

"He was clearly livid and was shouting: 'You tried to fucking kill me!' I couldn't really say anything back because my helmet was on, but he pretty much had to be restrained by his own race engineer. I found out later he'd even pulled away from Ferrari team members in their garage, so intent was he on confronting me."

With a face like thunder, Schumacher was pulled back to the Ferrari garage, knowing his title hopes had been dealt an enormous blow in seemingly cynical fashion. Coulthard would feel the brunt of that at Monza two weeks later. 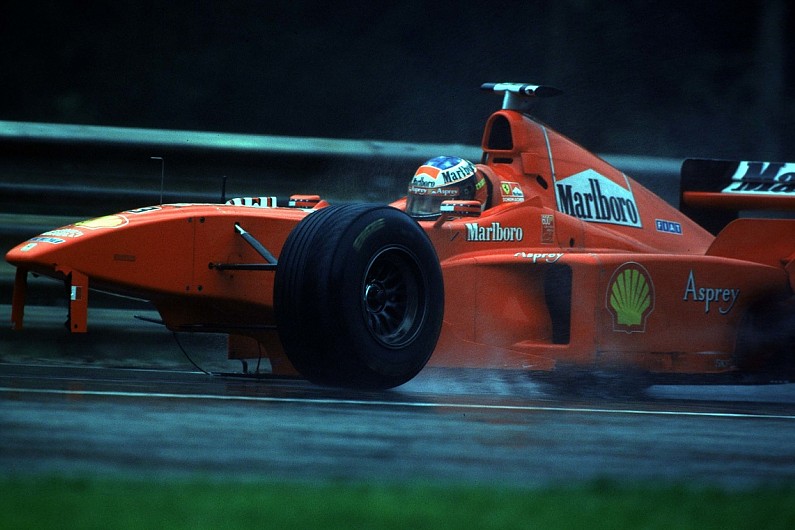 "Every time I went out of the garage into the pitlane, [the Ferrari fans] booed and some of them had a big sheet with the words 'Killer Coulthard' daubed on it," he wrote. The drivers ultimately shook hands over the incident, only after Michael had made clear who was at fault. "At this point I said: 'But Michael, are you ever wrong?' and if I recall correctly he said: 'Well, not that I remember'."

There was still hope of a Schumacher victory, though. Proving wet-weather skills were in the family business, Ralf Schumacher had been rising through the field to sit third before his brother's downfall. He had quietly chipped away at Hill's advantage, cutting it from 22s to a little over 10 at one point, but was handed a lifeline when the safety car was called following a crash between Giancarlo Fisichella and Shinji Nakano.

It put the younger Schumacher on the rear of Hill's car for the restart with 12 laps to go, giving the team a sniff of not just victory, but a 1-2 finish. Both would be firsts in the history of the team, coming in a season where it had finished a race no higher than fourth. It could not afford to throw it away.

Hill was starting to feel the pressure as the race entered its closing stages, the rain still pouring down. He then hit the radio button and made his status as world champion clear.

"I'm going to put something to you here, and I think you better listen to this," Hill said. "If we race, if we two race, we could end up with nothing, so it's up to Eddie. You've got to tell Eddie. If we don't race each other, we've got an opportunity to get first and second. It's your choice."

Jordan later told Hill: "You spoke to me like you'd never spoken to me before. It was a very strong [message], 'I am a world champion, I know how to win'. It wasn't an instruction to me, but it was strong advice." 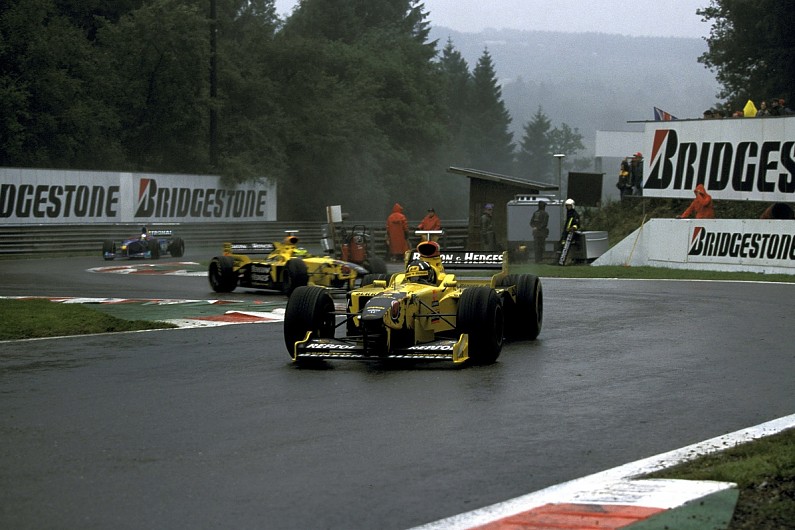 Jordan was slow to make a decision. "I was in the middle of a deal with Ralf, negotiating next year's contract, but actually that wasn't really in my mind," he said.

"What was in my mind and the reason why I was a touch slow coming back, I checked with the team where [Jean] Alesi was. He was running third, and I couldn't really [reply] until I knew all of the information.

"I didn't want to make a half-cock effort at giving you a reply. I needed to be sure."

"Michael came charging into the motorhome. 'You've screwed my brother! He will never drive for you again, forget the management contract'" Eddie Jordan

Jordan decided to use team orders, prompting Michael to tell the faster Schumacher to hold position in contradiction to his previous calls to push.

"Ralf, you cannot overtake Damon, that is a team order," Michael said. No reply. Schumacher continued to push.

"You heard me before, didn't you Ralf, about overtaking Damon. You heard that, didn't you?" Still no reply.

"Did you get that Ralf? Did you hear me?" Nothing.

"Ralf, acknowledge," barked Michael, his fourth attempt finally getting through to the German driver, who offered a two-word reply: "Yes Sam."

Jordan later reflected: "It was in the best interests of everybody. If it was the other way around, I would have gone with Ralf." 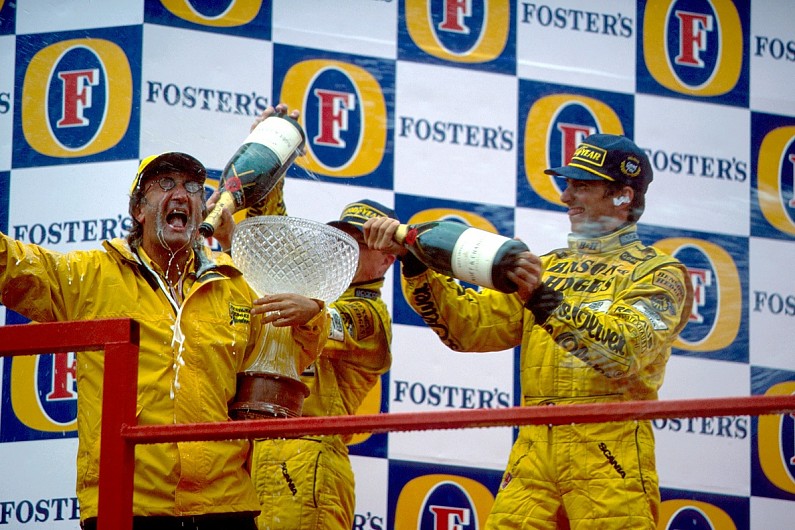 It relieved the pressure on Hill, allowing him to round out the final few laps before taking his first victory since the 1996 Japanese Grand Prix. It was Jordan's first F1 win, taking a 1-2 finish, sparking a now-famous jig from the team owner in the paddock that made him look, in the words of Hill, "like a demented kind of leprechaun".

As the team celebrated its famous victory, Schumacher's face offered a similar kind of fury to that shown by his brother in the McLaren garage an hour or so earlier. He waved his cap and sprayed the champagne, but felt aggrieved after being denied a possible first win.

Michael Schumacher would also have his say on the incident, making a point of finding Jordan amid the post-race celebrations.

"He came charging into the motorhome," Jordan said. "'You've screwed my brother! He will never drive for you again, forget the management contract.'"

"I said: 'Michael, it's very simple. There is a buy-out clause in the contract, pay the money, adios'. And he did. That's why he went to Williams."

Ralf would pick up one final podium for Jordan at Monza before leaving the team two races later, starting a six-year stint at Williams. Michael would miss out on a third world title, losing to Hakkinen at the final race. Victory at Spa could have given him a six-point lead for the title showdown at Suzuka instead of a four-point deficit.

It may be remembered for Eddie's dance and that start-line crash, but Spa '98 was also a crucial race for the F1 fortunes of the Schumacher brothers. 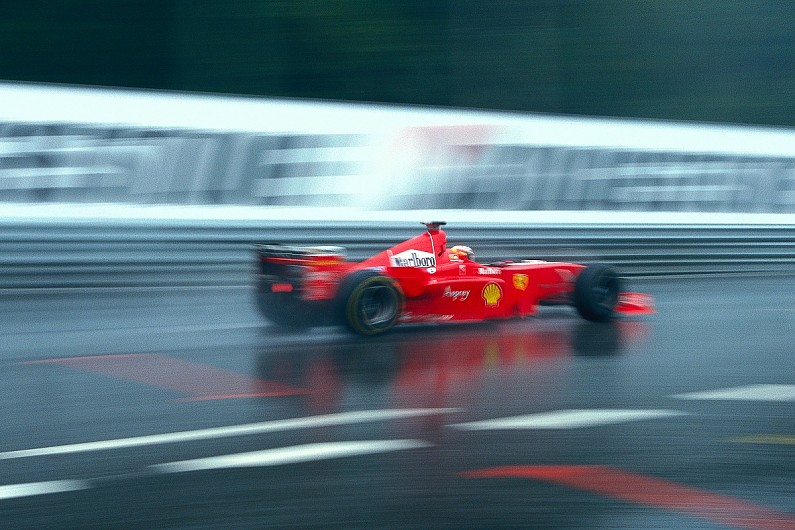