Beauty is not a prerequisite for a successful Formula 1 car, and plenty of bland machines have hogged air-time at the front of the field while dominating races. But occasionally we are treated to cars that have the looks to match their speed. Autosport took on the age-old challenge of picking the best from 70 years of the world championship

It's one of the classic F1 debates: what are the best-looking cars ever? It is, of course, entirely subjective, particularly as fans of different ages tend to prefer different eras and, therefore, feel attached to some cars more than others. But it's still fun to have the argument, particularly when liveries are factored into the mix as well.

In making Autosport's selection, we've tried to spread the joy across the constructors and periods - though some were beyond help. You won't find any cars from the terrible 2009-16 'skinny' period, for example.

We kept redrafting this list but eventually you have to commit, so here's where we've ended up. Let the beration begin! 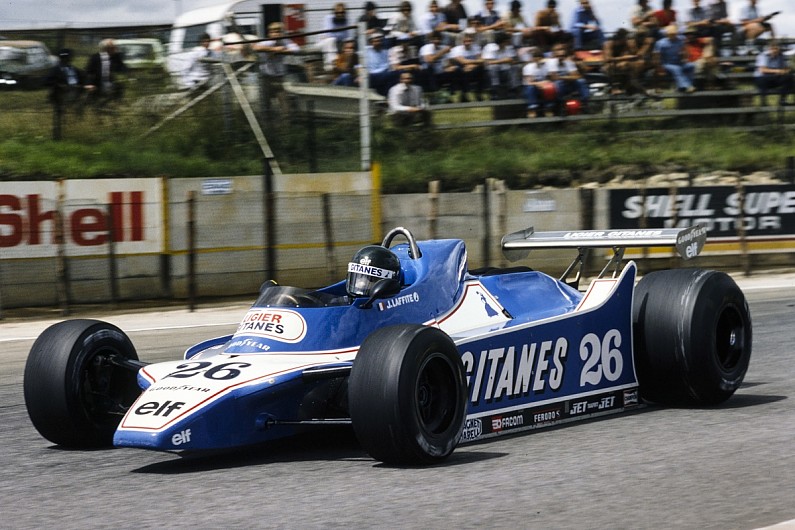 Many Ligiers were distinctive and the Gitanes-liveried JS11/15 was probably the most iconic of all. And the fin to the rear of the large sidepods added to the French flair.

The JS11, the first Ligier to have a Cosworth DFV instead of a Matra V12 engine, made a sensational debut at the 1979 Argentinian Grand Prix. Jacques Laffite qualified on pole by over a second and then won the race, which he followed up by leading team-mate Patrick Depailler to a Ligier 1-2 in Brazil.

The car wasn't without its controversy and lost its edge, particularly when Williams perfected its FW07, but the improved 1980 version remained competitive.

Didier Pironi won the Belgian GP and probably could or should have won in Monaco, Britain and Canada as well, while Laffite scored a lucky victory in Germany.

Both versions looked cool, but we rather like the sleek JS11/15 without the front wing, a set-up often used in 1980. 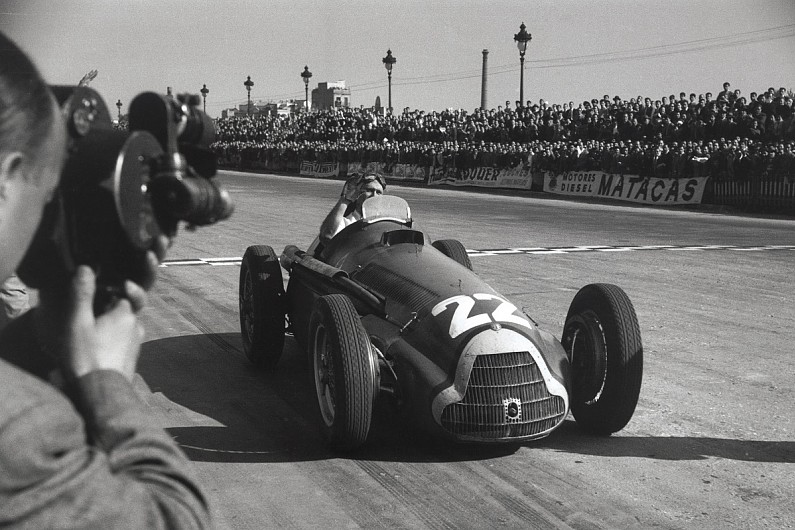 The Maserati 250F is usually considered the archetypal 1950s grand prix car, even though it appeared in quite different forms during its long career (and the 1957 version was surely the prettiest), and the Vanwall deserves an honourable mention, but we've gone for the first great Formula 1 racer.

The Alfa Romeo 158 actually appeared in 1938 as a voiturette, roughly equivalent to F2, but became a front-line GP car after World War Two. It went unbeaten for five years between 1946 and 1951, with Giuseppe Farina and Juan Manuel Fangio taking the first two F1 world drivers' titles with the 1500cc Alfa.

PLUS: The dogfight to become F1's first 'Alfa' male

Gioacchino Colombo's design was purposeful and well-proportioned - and that grille is one of the most distinctive of the front-engined GP era. The coloured nosebands often used to differentiate the team's cars set things off perfectly.

As an added bonus, we'd also argue that the supercharged straight-eight engine, which eventually produced around 400bhp, is one of motorsport's best-sounding engines, along with the BRM V16 and Matra V12. 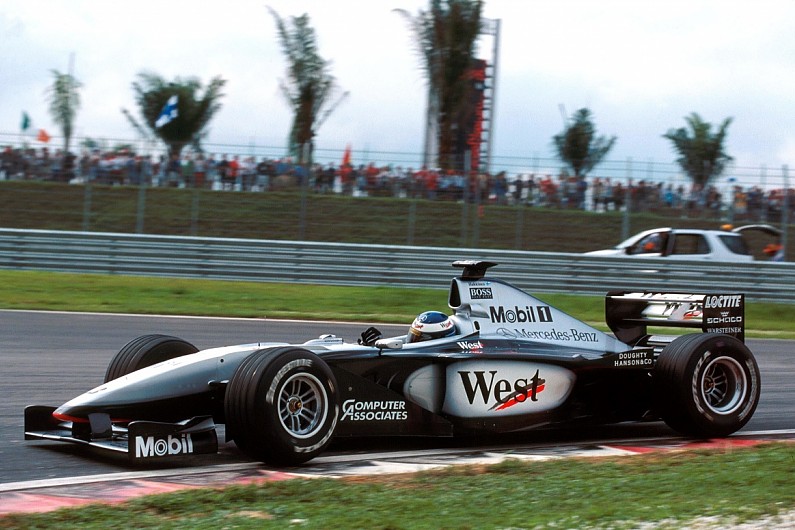 A number of the Adrian Newey-era silver McLarens could have made it onto the list and we've gone for the 1999 version that, despite several blunders, Mika Hakkinen used to take his second F1 world title.

The MP4-13 had returned McLaren to the top of F1 the previous year and the team pushed things harder for its successor. The oil tank and hydraulic system were moved and a shorter gearbox helped the car lose weight, useful when it came to placing the ballast required to bring the car up to the legal minimum.

The Mercedes V10 engine was also lighter and lower. The car was trickier to drive than its predecessor - Hakkinen crashed out of the lead of both the San Marino and Italian GPs - and there were some reliability issues.

All that helped Ferrari to win the constructors' title, but lead driver Michael Schumacher missed six races after breaking his leg at the British GP and Hakkinen was able to pip Eddie Irvine to the drivers' crown at the Suzuka finale.

The grooved-tyre era was not F1's finest, but the McLarens were invariably among the best looking of the time, and the mid-height narrow nose, neat sidepods and West livery helps get the MP4-14 onto our list. 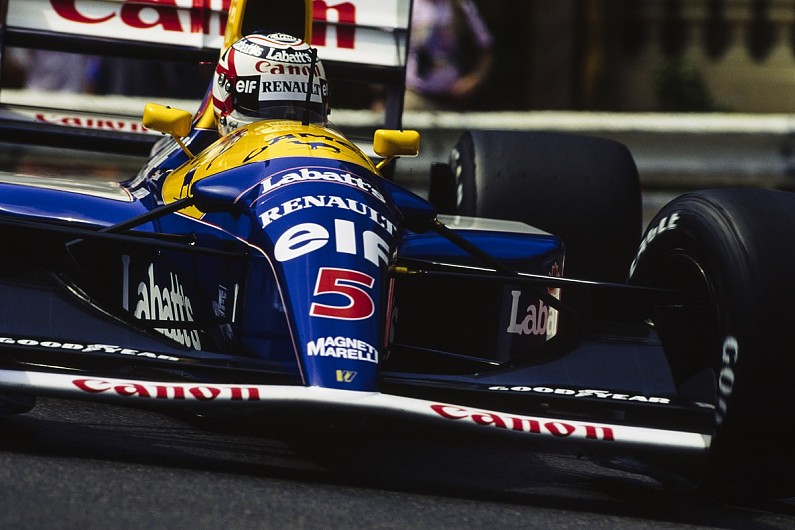 One of the great F1 cars, the FW14B combined active suspension and traction control to move the technical goalposts in 1992. Nigel Mansell won nine of the 16 races, which was a record at the time, on his way to the drivers' title.

One of the most dominant machines in F1 history, the FW14B was only beaten to pole position once, by Ayrton Senna at the Canadian GP. It also looked fantastic, particularly with Mansell's red five adding an extra splash of colour to the already iconic blue, yellow and white Williams scheme of the time.

The FW14B had an attractive low nose, which was soon to go out of fashion, partly due to the much more ugly Benettons. The body was also smooth and uncluttered - bargeboards and complicated aero flicks hadn't quite arrived just yet.

In some ways, the 1993 FW15C was a neater machine, but we don't think it's quite as imposing as the FW14B - and it had to use narrower rear tyres due to a rule change aimed at controlling lap times. 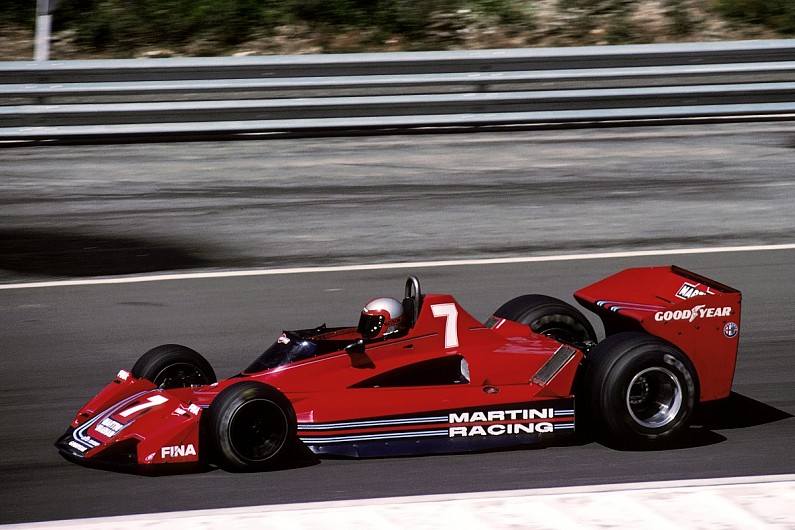 The 1975 BT44B arguably had a cooler overall shape, complete with high airbox but, for us, the BT45B's red Martini livery just edges it ahead of its white forebear.

A red Martini BT44B would probably have climbed even higher in our ranking. Brabham had switched from the Cosworth DFV to Alfa Romeo flat-12 for 1976, which had created some packaging issues for designer Gordon Murray.

The original BT45 was a bit awkward - and had a mediocre season - but the 1977 B version included aero revisions that helped make it much tidier. The BT45B was also competitive and should or could have won the Monaco, French and British GPs, a mystery fuel pick-up problem costing John Watson at both Dijon and Silverstone.

PLUS: The best F1 cars never to win a GP

Murray's BT46 for 1978 was neater and more successful, especially when a giant fan was famously strapped to the back for the Swedish GP, but its nose was not as aggressive as the distinctive Brabham front wings on the BT44 and BT45. 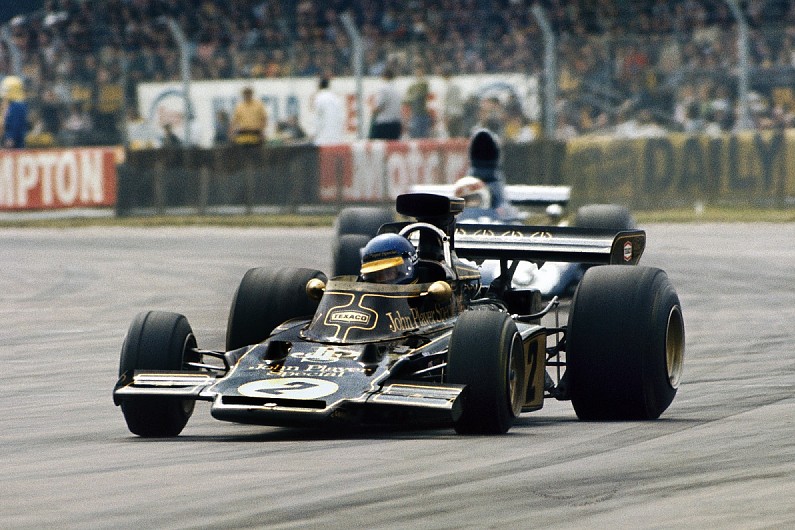 Not many cars get to wear two of motorsport's greatest liveries, but the revolutionary Lotus 72 did. In Gold Leaf colours it won both the constructors' and drivers' titles in 1970, though Jochen Rindt lost his life at Monza before he knew he was champion. Then, in the famous black and gold of John Player Special, the 72 won consecutive constructors' crowns in 1972 and 1973, with Emerson Fittipaldi taking the drivers' championship in 1972.

It's the most successful car on this list, in terms of world championship F1 wins, with a remarkable 20 victories. The wedge-shaped wonder, which helped set the template for future single-seater designs with its side-mounted radiators, changed a great deal during its six-season life in F1.

Which version you prefer is open to debate, but we've gone for the 1973 72E, with the rear wing hung way out the back, before rule changes moved it to a less outrageous position.

The distinctive helmets of Fittipaldi and Ronnie Peterson added to the appeal and helped produce some iconic images, not least of which was SuperSwede sideways through Woodcote at Silverstone.

This was also the time of fat rear tyres and huge variety in the appearance of F1 cars, creating many other candidates for this list, including the Ferrari 312B, Shadow DN1 and McLaren M23, which was almost as successful as the Lotus 72. 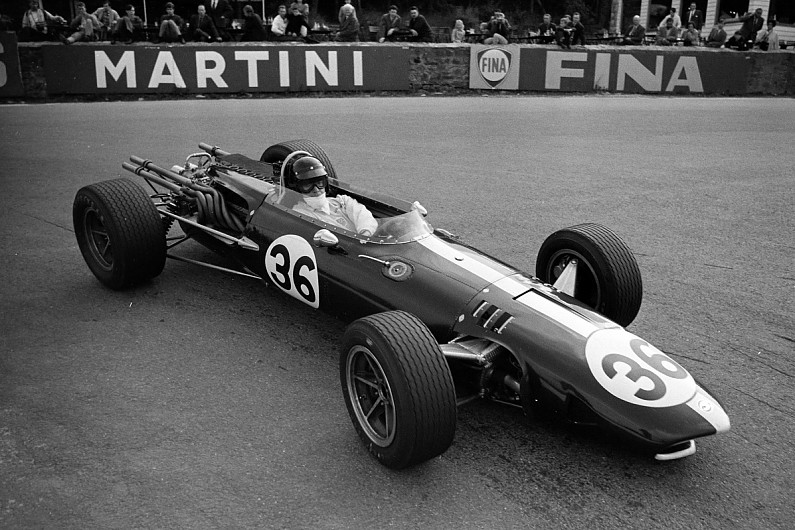 Although often pretty, many of the cigar-shaped F1 cars of the 1960s lacked the beefiness one might expect from the pinnacle of the sport, especially during the 1.5-litre era. The 1962 'stackpipe' BRM P57 very nearly made this list, but it's Len Terry's ever-popular Eagle-Weslake that is our pick from the decade.

The first GP Eagle, commonly referred to as the T1G, had the right combination of beauty and aggression, the pointed nose helping to set it apart from its contemporaries.

The three-litre car was quick too. Dan Gurney won both the Brands Hatch Race of Champions and Belgian GP - the Spa victory at an average speed of 146mph - in 1967, but reliability problems prevented further success.

The Cosworth DFV-engined Lotus 49, another car others might have put on this list, moved the goalposts during the season and a lack of funding soon led to Gurney's team focusing on Indycar racing. 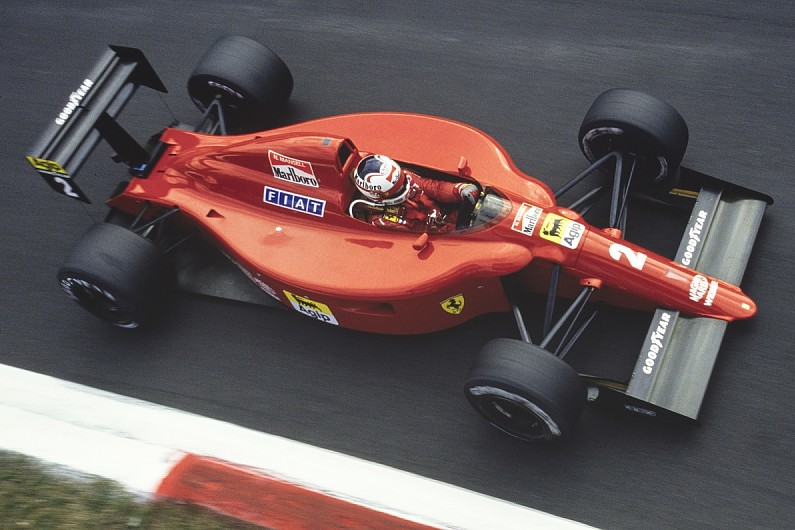 We wanted to squeeze Adrian Newey's Leyton House CG901 on to this list, but we've tried to get a nice spread of eras and two cars from one season just didn't seem right. The McLaren MP4/5B that won both titles in 1990 was also a fine-looking car, but it's Ferrari's contender that narrowly gets the nod.

The svelte scarlet car retained the ground-breaking semi-automatic gearbox of John Barnard's visually similar 1989 640. Its V12 tended to be outgunned by the V10s of Honda and Renault in 1990, but the chassis was a good one and Alain Prost battled McLaren's Ayrton Senna for the world title.

PLUS: The F1 perfectionist who pushed too soon

That enthralling contest ended when Senna crashed into Prost at the start of the Japanese GP, but it was the closest Ferrari got to ending its title drought until the Jean Todt/Ross Brawn/Michael Schumacher era. 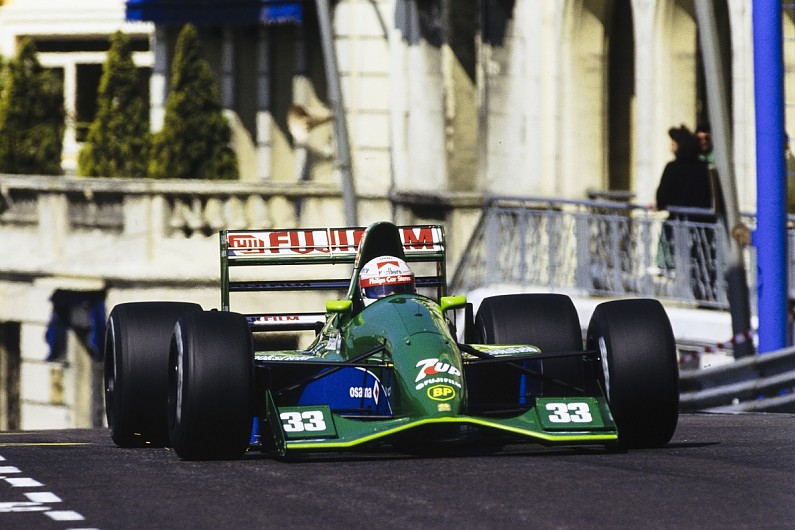 Few teams have made such a big impact on their arrival in F1 as Jordan. Designer Gary Anderson's 191 was not only surprisingly rapid, it was beautiful. Shapely curves, which even extended to the distinctive nose and front wing, and the simple 7Up green livery made it an instant modern classic.

As a new team at a time when there were more F1 cars than spaces on the grid, Jordan initially had to pre-qualify, but the 191 made that a relatively easy task for regular drivers Andrea de Cesaris and Bertrand Gachot. Jordan scored its first points in the Canadian GP and the team ended up fifth in the constructors' table, behind only big hitters McLaren, Williams, Ferrari and Benetton.

The 191 also helped Michael Schumacher launch his F1 career, with a stunning performance at Spa, and de Cesaris might have won the Belgian GP had it not been for an engine failure, the result of a miscommunication between engine supplier Cosworth and the team. 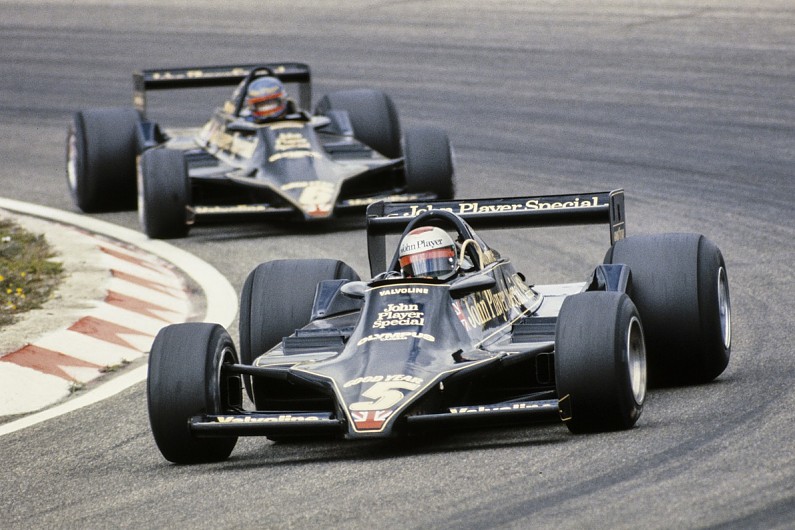 The Lotus 79, which refined the ground-effect concept and dominated the 1978 F1 season, ticks all the boxes for this list. It's also even more impressive close up in the flesh than it is in the famous period images of Mario Andretti and Ronnie Peterson.

Lower, neater and sleeker than the Lotus 78 that preceded it, the 79 won on its debut in the Belgian GP in the hands of Andretti and finished 1-2 next time out in Spain. It was only beaten to pole once during the campaign, though the odd reliability issue and jump-start penalty for Andretti at Monza meant it only won six of the 11 championship rounds it started in 1978.

By 1979 the opposition had caught up in the ground-effect stakes and the Lotus 79 was limited to four podiums. Even then it looked impressive in its green Martini livery, but it's the JPS-liveried original that deservedly earns our top spot. 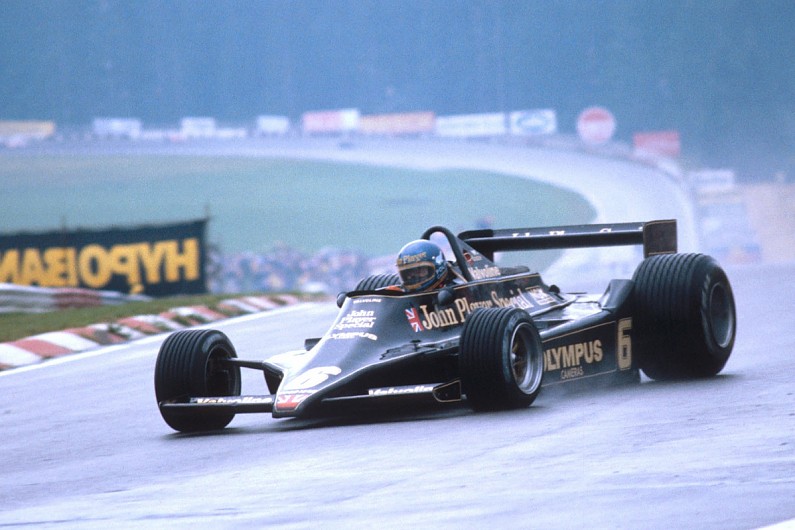