In the latest of our series of races picked out by Autosport journalists, we revisit the 2012 Brazilian Grand Prix. That year's season finale is rightly remembered as Formula 1's most-recent great title-deciding race, full of drama and chaos, which created some of the best images in the championship's modern history.

When it comes to the criticism laid against present-day Formula 1, the 2012 season is often cited as an example of the 'good old days' the championship must recapture.

It's easy to see why. It was a spectacular season, with eight different winning drivers from six teams. Two further teams came close to victories in what was surely the most competitive season so far in this century.

Everything that made 2012 great was encapsulated in the season-ending Brazilian Grand Prix at Interlagos. It had underdogs starring, legends bidding farewell, and most memorably, F1's most-recent great championship decider.

The 2014 and 2016 finales were certainly dramatic enough, as Mercedes team-mates Lewis Hamilton and Nico Rosberg duelled under the lights in Abu Dhabi for the title. But the former was settled the moment Rosberg's car failed, and the latter was only dramatic thanks to Hamilton's futile attempts to back his rival into the opposition.

The 2012 showdown between Red Bull's Sebastian Vettel and Ferrari driver Fernando Alonso was on another level. They had slugged it out all season, and arrived in Brazil separated by 13 points. Alonso had built a 40-point lead heading into the summer break, hauling his troublesome F2012 to wins in Malaysia, at Valencia and in Germany. Vettel had just one win to his name at the end of the European season - a third title seemingly far out of reach.

But the tables quickly turned. Red Bull had made a breakthrough with its updates over the summer, taking a big step over the rest of the field. Four straight wins from Singapore to India, followed by podiums in Abu Dhabi and at Austin, put Vettel in charge of the title race. Fourth in Brazil would be enough to clinch the championship, while Alonso had to finish on the podium to stand any chance of claiming his first Ferrari crown.

Vettel struggled in qualifying, taking fourth after a mistake on his opening lap in Q3. Team-mate Mark Webber was alongside him in third, while the McLarens locked out the front row. For his final McLaren race, Hamilton edged out Jenson Button for pole, raising hopes of a farewell victory. 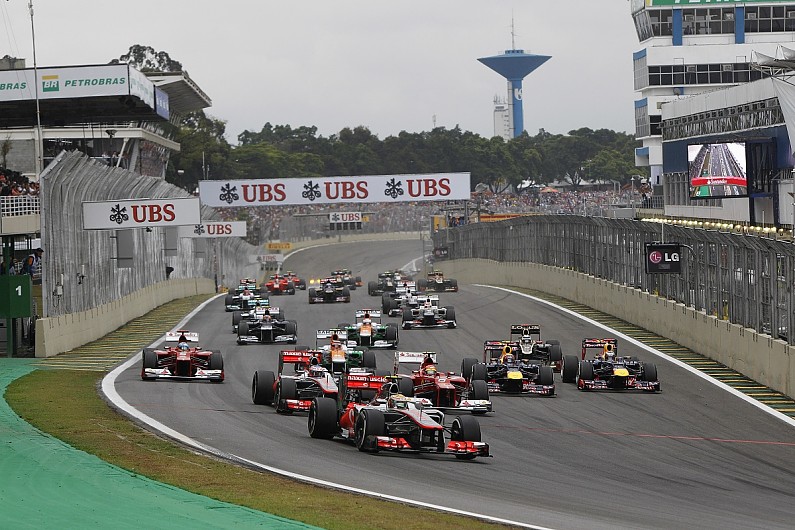 Alonso had toiled in qualifying as he had done so many times that year. He hadn't qualified higher than fourth since taking pole at the German GP, and wound up eighth at Interlagos, gaining a place after Pastor Maldonado's grid penalty. The odds were stacked heavily in Vettel's favour, and Alonso knew it.

"If I am to have any hopes for the title, it's more plausible to count on a retirement for Vettel rather than for him to finish in a position where I can get ahead of him in the classification," he said. "Obviously, I am hoping for a chaotic race, and so the rain could be an important factor even if, in the wet, it is riskier for everyone."

Alonso's prayers were answered when light rain began to fall in the build-up to lights out, leaving the track greasy but not damp enough for intermediates.

Both Red Bulls were slow getting away from the second row, allowing Felipe Massa's Ferrari to pass them both from fifth. Vettel stuck to the inside, but was forced to lift as he hugged the Turn 1 apex following a squeeze from Webber that would prove the catalyst for the Multi 21 farago at the Malaysian GP in 2013.

Vettel's loss of momentum allowed both Nico Hulkenberg and, crucially, Alonso to get the jump on him, demoting the points leader to seventh and into the firing line for an accident at Turn 4.

From the moment he swung his car around, Vettel produced the kind of display that was a hallmark of his title years

Vettel stayed wide at the corner to leave room for Paul di Resta, only for Williams's Bruno Senna to try and pass both drivers with a dive-bomb move. His right-front wheel slammed into Vettel's left sidepod and sent them both spinning. After facing the wrong direction, Vettel was able to turn around, but now ran last with visible damage.

To make matters worse, Alonso had managed to pass both Webber and Massa in one move at the end of the first lap of 71, meaning he was third - in position to steal the title.

After a few laps, Red Bull saw no massive issues in the data despite Vettel nursing a crack on his car. The calming tones of race engineer Guillaume Rocquelin belied the unease growing on the Red Bull pit wall, as the team hurriedly arranged for a trackside photographer to send pictures of the damage. Technical guru Adrian Newey studied a printed-out picture of the rear of Vettel's RB8 that showed exhaust pipe damage, which caused fears of a possible fire. 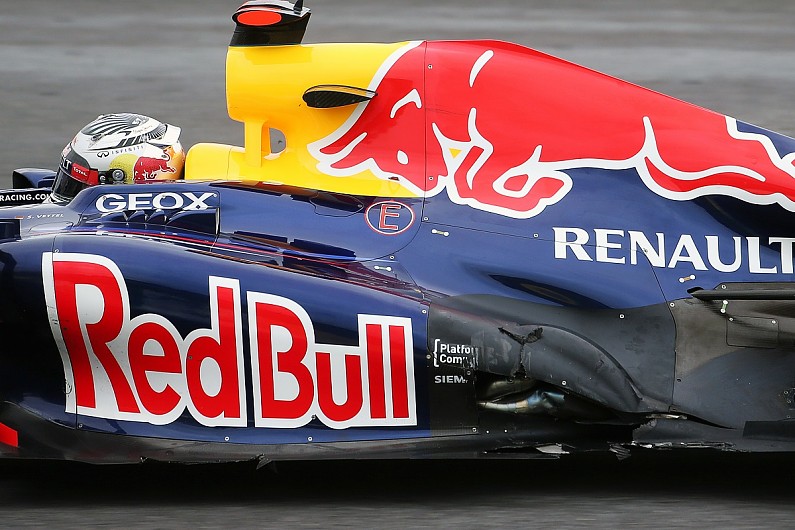 Meanwhile Vettel was doing all he could to revive his title hopes. From the moment he swung his car around, he produced the kind of consistent, smooth display that was a hallmark of his early 2010s form. As the rain grew heavier and drivers struggled more, Vettel picked them off one-by-one, clawing back to sixth by the end of lap nine. Alonso, meanwhile, had dropped to fourth behind Hulkenberg after a mistake caused him to run deep at Turn 1.

Alonso and Vettel pitted for intermediates together on lap 10, but were forced to make the switch back within 10 laps as the rain shower passed. The only drivers not to have come in were the two leaders: Hulkenberg - turning what looked like the drive of his F1 career for Force India - and Button. But their advantage was wiped away when a safety car was called due to debris on the track on lap 23.

As the race was neutralised, Vettel was in calmer waters, but knew a storm was brewing. He ran sixth, directly behind Alonso, which meant the title was his at that point. But he had lost downforce in the crash, and had to run his car in a lower power mode due to the exhaust issue. He was wounded and, seemingly without Webber's support, alone in the title fight.

Vettel was caught napping at the restart, allowing Sauber's Kamui Kobayashi - who had proven with his robust defence of champion-elect Button on his F1 debut at Interlagos in 2009 that he wasn't a driver to shy away from getting involved in a title battle - to sweep past into Turn 1 and take sixth. Webber tried making a move around the outside to make it three-abreast, only to slide wide and drop back. As the drizzle returned, Massa too passed the Red Bull with a sweep around the outside at Turn 4, Vettel unwilling to get into a fight.

He was eighth, still enough to be champion, but far from comfortable.

Unable to get close enough to Kobayashi to attempt a pass, Vettel was left pondering when to come in again, or whether to wait for intermediates as rain appeared on the radar. To make matters even worse, an issue with his radio left him muffled and indecipherable.

Red Bull brought Vettel in for another set of slicks with 18 laps to go, only for the growing rain to force another stop two laps later. But the team failed to get his tyres ready in time, leaving him stood waiting for 10 seconds longer than usual. Everything seemed to be going wrong. 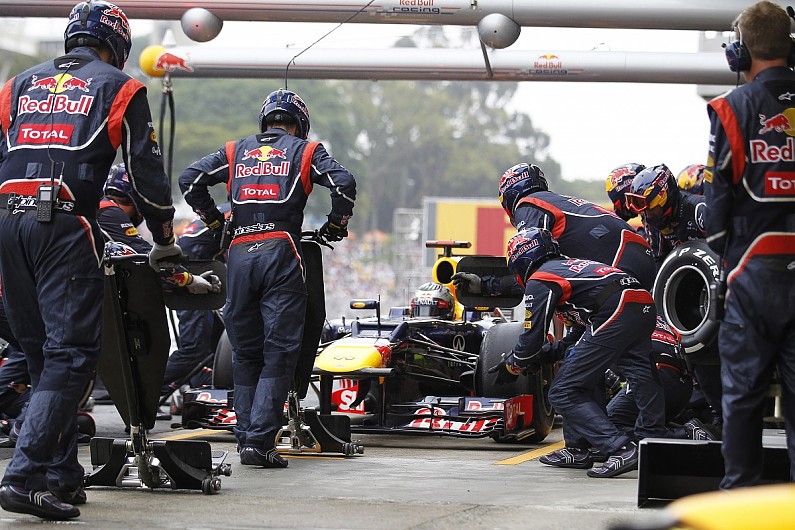 But again, Vettel found a way back (something Kimi Raikkonen hilariously failed to find in the final sector after going off-track).

As conditions worsened and more drivers came in for intermediates, the ship steadied. Hulkenberg and Hamilton clashed while battling for the lead, removing Hamilton from the race. Alonso took second after Massa dutifully moved aside, while Vettel was seventh behind Michael Schumacher, who had recovered from running last and a lap down to rise into the points in his final grand prix.

Schumacher gave Vettel little resistance on the uphill run to Turn 5 with six laps to go, giving his compatriot a little more breathing room in the title race. But if anything happened to Button at the front, the title would be Alonso's. Vettel's relief came with three laps to go when di Resta crashed out on the main straight as the rain grew heavier, causing the safety car to come out and lead the racers home.

Vettel had survived the storm - and was champion for a third time.

The 2008 season finale may never be beaten in terms of late drama in a title showdown, but the 2012 decider was equally powerful as a sporting saga

The cars filtered into the pitlane after taking the chequered flag, with the drivers stepping out to produce some of the most iconic images in modern F1 history. A jubilant Vettel hopped out of his car, now a three-time world champion, and was quickly greeted by Schumacher, the man passing the baton as Germany's F1 great. Vettel's trademark finger-point celebration followed before he rushed to meet his rain-soaked mechanics.

Red Bull advisor Helmut Marko put his arms around Newey and team boss Christian Horner on the team pit wall, both of whom had had their heads in their hands, mentally spent after an exhausting race.

"It was the toughest [race we had], but we kept believing and remained ourselves," said Vettel. "[It was] really difficult. How do you try and keep calm? You just push and push and make a comeback." 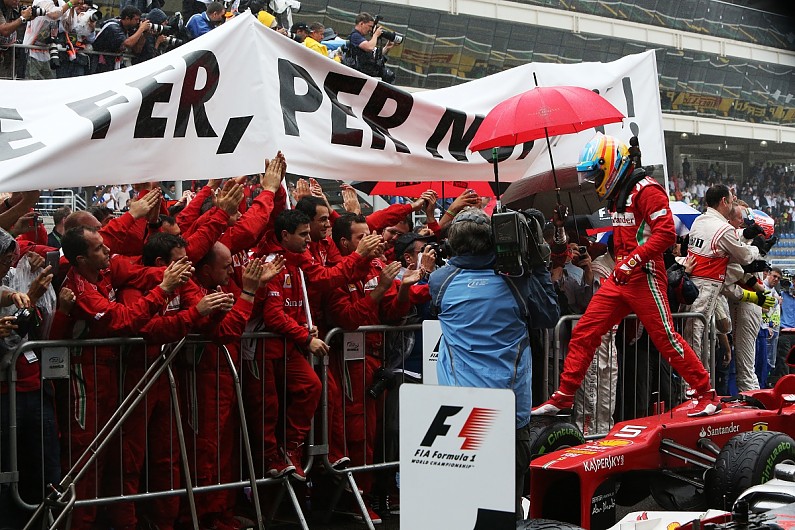 And then there was Alonso. He jumped out of his car, propped open his visor, and stood motionless waiting to complete his post-race weigh in. As the camera zoomed in, his heavy, hollow stare spoke volumes. He had given everything as the underdog, outstripping his car's performance week-in, week-out. But it wasn't enough. He was still a two-time F1 champion - and remains so to this day.

The 2008 season finale may never be beaten in terms of late drama in a title showdown, but the 2012 decider was equally powerful as a sporting saga. The underdogs had their moments, but none could produce the fairytale end to the season.

Only Vettel truly got what he desired by winning a third title that day. Given all that was thrown at him and the fortitude he showed, it was hard to argue he deserved anything less. 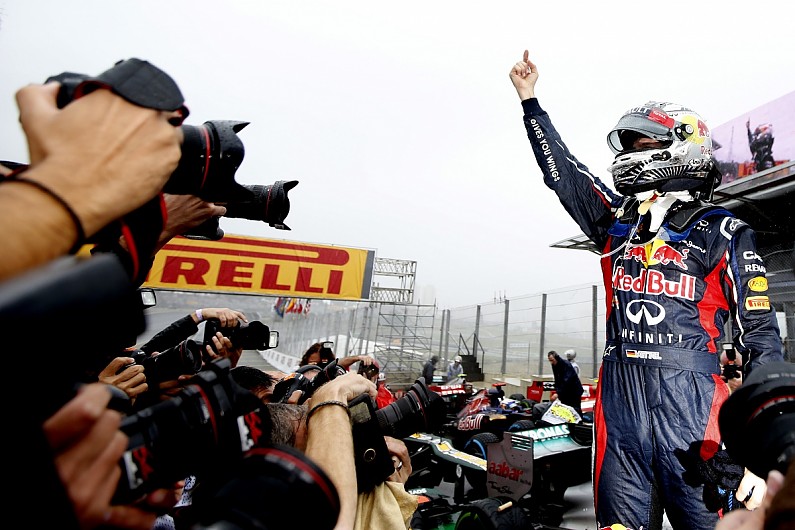