The 2012 Brazilian Grand Prix, which is being live-streamed by Formula 1 today, is upheld as one of F1's most dramatic title-deciders. The fight for the victory was no less exciting, as yet another chance slipped through the fingers of an F1 nearly-man

The 2012 Brazilian Grand Prix is one that regularly features highly in lists of great Formula 1 races.

The rain-affected event at Interlagos hosted a classic title decider between Fernando Alonso and Sebastian Vettel, with the latter fighting back from contact on the opening lap that left him running last to clinch his third world title. It was also the final race of Michael Schumacher's career, the final victory for 2009 world champion Jenson Button, and the most-recent win for McLaren, which also bid farewell to Lewis Hamilton at that race.

Its significance in recent F1 history is enormous. And yet it could have gone down as the race that changed another driver's F1 career.

Nico Hulkenberg came within 17 laps of an epic, giant-killing victory that could have completely altered his career trajectory. Instead, he bowed out of F1 at the end of last year with the unwanted record of not scoring a podium in 177 starts.

Hulkenberg's return to Interlagos in 2012 brought back good memories. It was the site of his famous charge to pole position in the damp with Williams in 2010, which was his rookie season. Hulkenberg only finished that race eighth, but it had been a display that added to the 2009 GP2 champion's growing stock.

After losing his Williams drive to well-funded Pastor Maldonado for 2011, Hulkenberg spent that year as Force India's reserve driver and was promoted to a race seat the following season alongside Paul di Resta. He stood out with some impressive displays despite 2012 being one of the most competitive seasons in recent memory, making him a candidate to replace Felipe Massa at Ferrari for 2013.

Massa was ultimately retained and this prompted Hulkenberg to sign for Sauber, which had completed some giant-killings of its own in 2012 with four podiums - the highlight being Sergio Perez coming close to an unlikely victory in Malaysia. 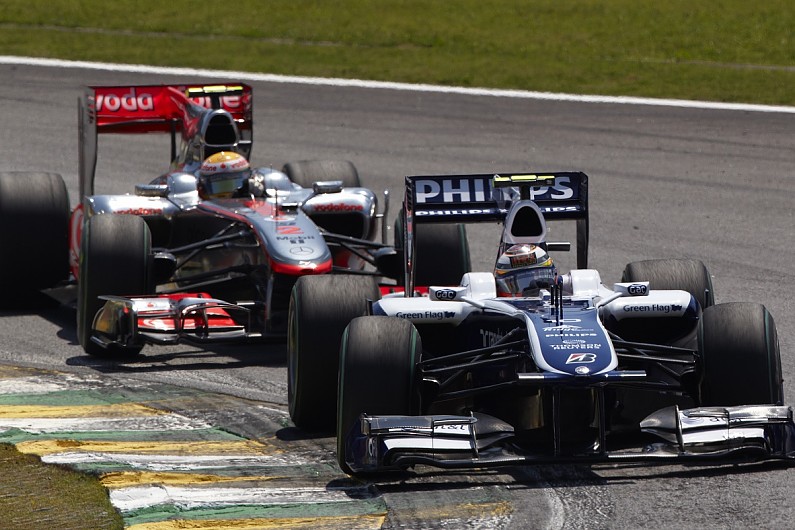 Hulkenberg qualified seventh for his final - at the time - Force India outing, nosing clear of title-fighter Alonso. He shuffled up a place on the third row thanks to Maldonado's grid penalty, giving him a quiet confidence heading into the race thanks to the straightline strength of his Mercedes-powered VJM05.

Hulkenberg's good getaway from the grid was compromised by the more sluggish Red Bulls on the run to Turn 1. This caused him to lose a place to Alonso initially before he regained sixth, when the cautious Vettel was forced to lift on the inside of the corner after being squeezed by Mark Webber.

Hulkenberg picked off Massa at the start of the second lap of 71 as the Brazilian lost three places in a matter of seconds, leaving the Force India tailing Webber and Alonso as spots of rain continued to fall.

Hulkenberg was fearful his set of hard compound tyres would not make it all the way to the end, meaning another stop was likely regardless of any returning rain

A strong exit out of Juncao then allowed Hulkenberg to ease past Webber on the start/finish straight as they started the third lap, before Alonso locked up two laps later and went straight on at the first corner. Hulkenberg now sat third, with only the dominating McLarens of Hamilton and Button ahead.

Hulkenberg ditched the gaggle of cars behind as they all struggled in the damp conditions, prompting some, including Hamilton, to make the switch to intermediates. But Hulkenberg and leader Button were both able to see out the brief shower, sticking to slicks, although they were finding different levels of grip.

This allowed the Force India to close right up on the rear of the McLaren by lap 17, before Button's wiggle exiting the final corner one lap later gave Hulkenberg the chance to pass for the lead. He took full advantage, putting him at the front of the pack in a grand prix for the very first time (he was third by the end of the first lap in 2010).

Debris caused the safety car to be called on lap 23, giving Hulkenberg and Button the chance to pit for a fresh set of slicks. The Force India crew turned Hulkenberg around just in time to retain his lead, which he almost threw away on the first lap after the restart as spots of rain returned, causing him to have a massive twitch through the long left-hand Turn 3.

Button had struggled to keep up, though, and was passed by Hamilton for second place one lap later. 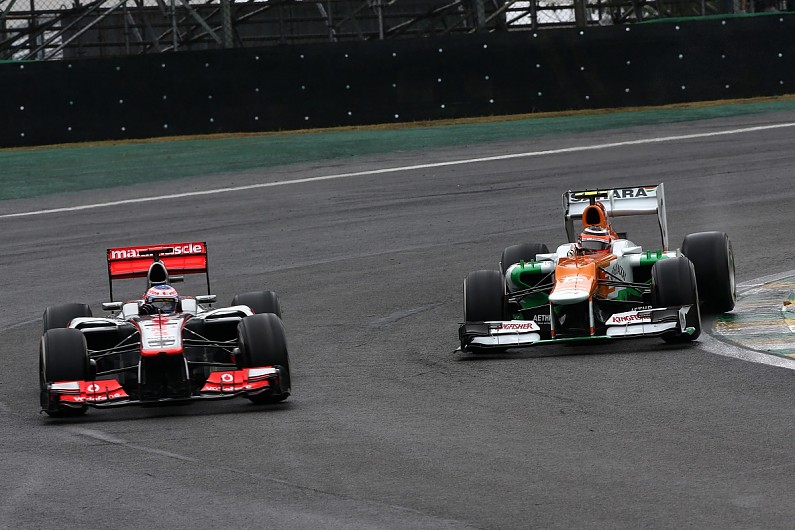 Hulkenberg and Hamilton soon found themselves alone at the front as the drizzle continued, but not yet growing heavy enough to warrant a move back to intermediates. While he was able to move more than two seconds clear, Hulkenberg was fearful his set of hard compound tyres would not make it all the way to the end, meaning another stop was likely regardless of returning rain.

Hamilton began taking chunks out of the gap at the front nearing the final third of the race. As the pressure continued to mount, Hulkenberg touched the white line entering the Bico de Pato right-hander, causing the rear of his Force India to slew out and send him into a half-spin. While he was able to save it, Hamilton had slithered his way through to the lead.

But as Hamilton's older tyres neared the end of their life, Hulkenberg found himself gaining time again. A string of backmarker traffic - including his inadvertent ally of the 2008 title decider at the same track, Timo Glock - cost Hamilton precious time, allowing Hulkenberg to close up through the middle sector and get a run down the main straight.

Hulkenberg committed to the inside as they crossed the line just one-tenth of a second apart to start lap 55, with Glock and Heikki Kovalainen's Caterham just ahead. Hamilton stayed to the right, locking up, but when Hulkenberg had a brief twitch under braking and slid wide, the two made contact.

The Force India was popped into the air as their wheels collided before spinning around. Hamilton's front-left axle was broken, ending his McLaren swansong early, while Hulkenberg was able to continue in second as the rain returned.

But two trips to the pitlane in two laps ended Hulkenberg's podium hopes, the first to switch to intermediates, the second to serve a drive-through penalty for causing a collision. It relegated him down to fifth place, where he would remain to the end of the race.

"I'm not too disappointed," an upbeat Hulkenberg said afterwards. "Fifth place is still a good result. I've learned a lot in this race. My first kilometres leading a race, and fighting with the top guys, so it was pretty eventful and a hell of a race.

"I'm proud of what we've done and my drive. It's not perfect but I'm still happy." 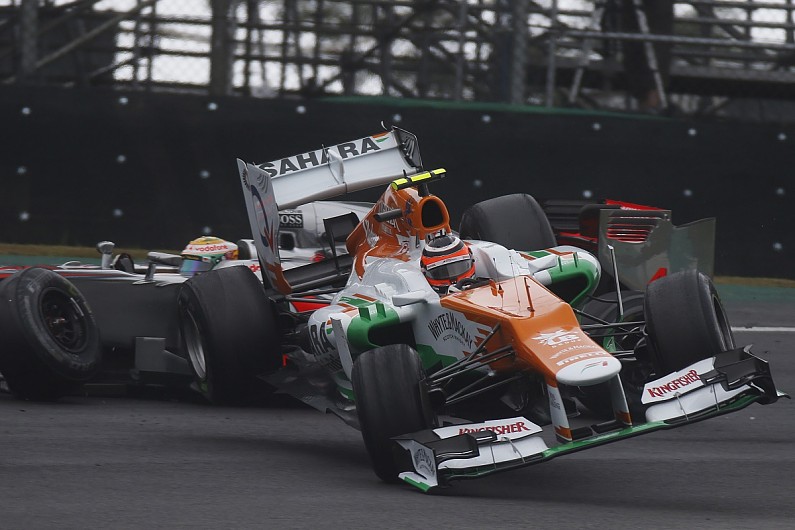 Hamilton was less impressed with Hulkenberg, though, after being denied a possible victory in his final McLaren outing.

"The dude didn't even say sorry, so that says a lot," Hamilton quipped. "That's what happens when you race with the less experienced [drivers]."

The performance capped off a season that ended with Hulkenberg - not podium finishers Perez, Romain Grosjean and Kamui Kobayashi, or Spanish GP race winner Maldonado - being touted as "the man to watch in the future", as Autosport put it in our end-of-year F1 review.

"I watched it all over again - and my heart was bleeding. That was the day" Nico Hulkenberg

But the lessons learned when leading a grand prix were rarely needed; Hulkenberg ended up leading just two more races in his F1 career - China 2013 and Brazil 2014, both due to off-piste strategies - for a total of 13 laps.

Had Hulkenberg won in Brazil, or even held on for a podium, what kind of change would it have made for his career?

The move to Sauber for 2013 had already been sewn up one month before the 2012 finale, and ultimately proved to be a mis-step. The Swiss team struggled to compete with the rivals such as McLaren and, through the early part of the year especially, Force India. But Hulkenberg did end the year on a high with eye-catching drives at Monza (fifth) - which earned him 10/10 in Autosport's driver ratings - and in Korea (fourth).

"With hindsight it's easy to say, but that change to Sauber in 2013 was - while it was a good second half of the season - I think all in all that move maybe was not the best for my career," Hulkenberg said last year. 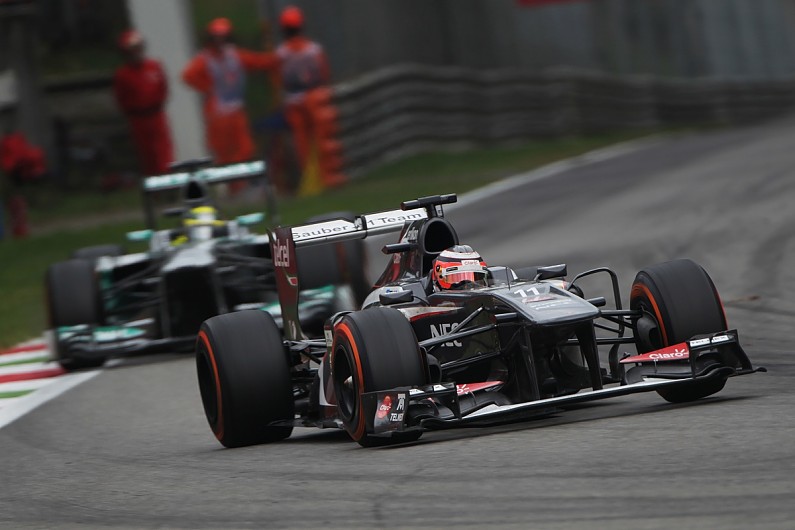 The links to top teams continued and talks with Ferrari took place over a seat for 2014, but nothing came to fruition. Hulkenberg ultimately returned to Force India where he remained until joining Renault's works team for 2018.

Two seasons later, he was out of F1 completely without a podium finish to his name, although he did win the Le Mans 24 Hours in a one-off appearance with Porsche in 2015.

Would victory in Brazil have strengthened the case for one of the front-running teams to pick him up? Could it have swayed Ferrari against signing Kimi Raikkonen as Massa's replacement, or made Red Bull think twice about promoting Daniel Ricciardo?

Ahead of his final race start in Abu Dhabi last year, Hulkenberg revealed he had rewatched the Brazil race just the week before - and it had brought up some telling emotions.

"I was in bed watching Sky classic races, and I just tuned in and it's that race," said Hulkenberg. "I'm leading and I watched it all over again - and my heart was bleeding.

"That was the day. That was a special race, a special day, a very young Hulk. That was one of the special drives from the history books."

But could it have changed his career? Hulkenberg paused to think, before answering: "Maybe. Possibly. But it's always difficult to tell what would have happened in that situation. I don't know."

Regardless, Brazil 2012 will forever be the race where Hulkenberg came as close as he ever would to that kind of F1 glory. Instead, he became consigned to true 'nearly-man' status. 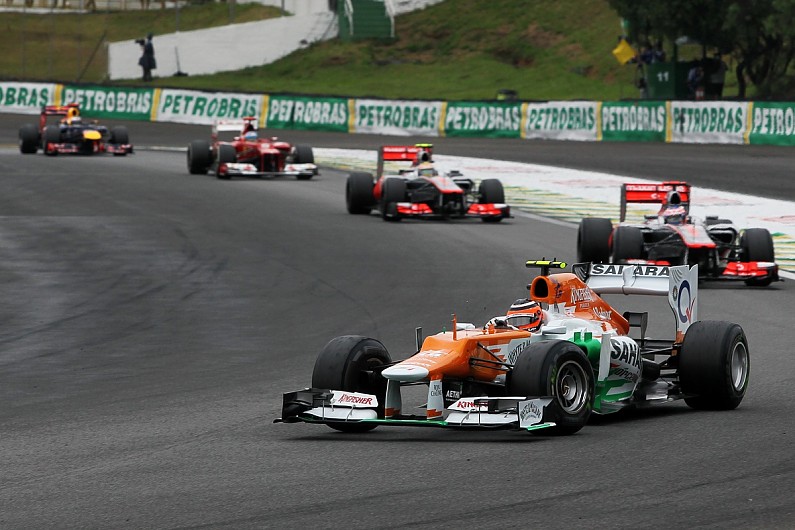