Lewis Hamilton led a Mercedes 1-2 on the opening day of 2020 Formula 1 pre-season testing at Barcelona, topping the timesheets ahead of Valtteri Bottas.

After watching team-mate Bottas set the pace in the new Mercedes W11 car through the morning session, reigning world champion Hamilton took over for the afternoon, completing 94 laps.

Hamilton managed to beat Bottas's time within the first 90 minutes of the four-hour session, and improved further to end the day with a best lap of 1m16.976s, set on the C2 compound tyre.

The lap left Hamilton three tenths of a second clear of Bottas in the final standings.

The Finn racked up 79 laps in the morning session, with his fastest effort coming on the C3 tyre.

Sergio Perez finished an impressive third for Racing Point as the team broke cover with its new RP20 car, notable for its similarities to Mercedes's 2019-spec design.

Perez lapped within four-tenths of a second of Hamilton on the C3 tyre, completing 58 laps before handing over to team-mate Lance Stroll for the afternoon.

Max Verstappen finished fourth for Red Bull, half a second off Hamilton's benchmark time, but suffered two spins in the afternoon in the final sector.

They proved to be the most notable on-track incidents during a quiet day of uninterrupted running, as all teams managed to complete over 100 laps thanks to a lack of red flags or stoppages.

Ferrari finished the opening day down in 11th with Charles Leclerc, who deputised for the unwell Sebastian Vettel.

Leclerc completed more than two race distances despite being kept in the garage for over an hour at the start of the afternoon session, finishing the day 1.3s shy of Hamilton. 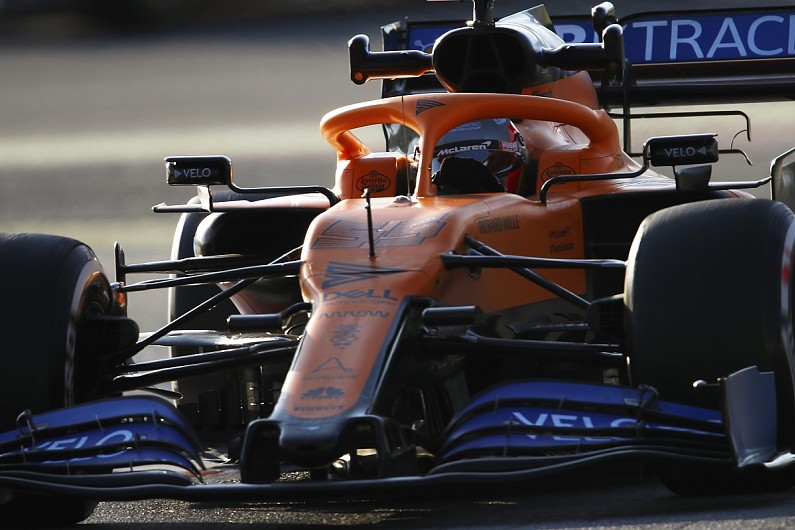 Daniil Kvyat took fifth place for AlphaTauri ahead of McLaren's Carlos Sainz Jr (pictured above), with both setting their fastest time on the C2 compound.

Ricciardo was able to beat Ocon's time by 0.131s in the afternoon. George Russell ended a solid first day of testing for Williams in ninth place, having completed 73 laps through the morning.

In a far cry from 2019, when the team missed the first two and a half days of the first test due to delays with the build of its car, Russell finished 1.1 seconds behind Hamilton, and reported the new FW43 was already "much better" to drive.

Nicholas Latifi took over from Russell in the afternoon, finishing two tenths of a second off his team-mate in 12th.

Robert Kubica ended the day 13th during his maiden outing as Alfa Romeo's reserve driver, completing 59 laps in the morning.

Testing resumes at 9am local time on Thursday at Barcelona.