Williams' 2019 season got off to a bad start when its FW42 missed the start of pre-season testing, and it quickly became clear the car was uncompetitive and well off the back of F1's midfield battle when the season started proper.

Chief technical officer Paddy Lowe left the team, which went on to score just one point in 2019, and finished last in the constructors' championship for the second year in a row.

Williams has been working to improve its car development processes for the future and Russell says that rebuilding process went slower than originally predicted.

"The team took a big reset with an aero philosophy and we had to take that hit in performance to rebuild those foundations, so starting the season we were not surprised [with] the position we were in," said Russell.

"We did hope to improve at a greater rate than we did, but those foundations took longer to put in place than we all anticipated.

"[But] now, the rate of improvement we are on is really strong. 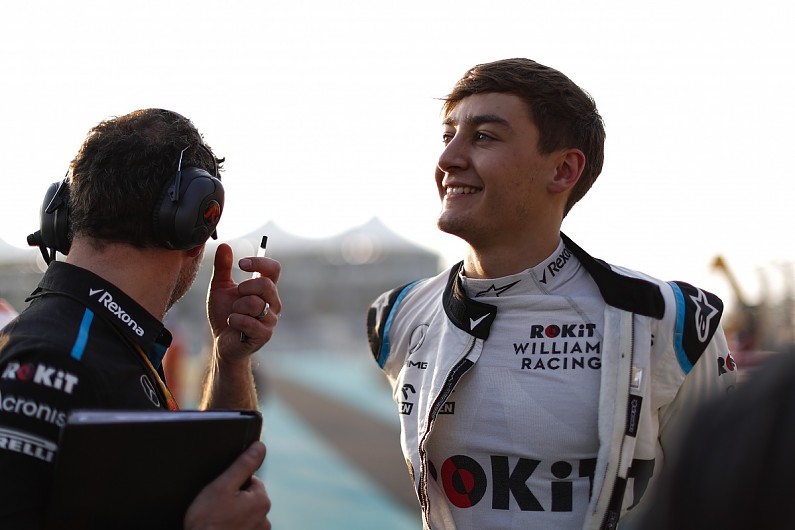 "We can really see that in the windtunnel tracker of the downforce we had at the start of the year, to what we have in the car now, to what we believe we will be starting next year.

"The only thing we don't know is how much everybody else will improve.

"I can tell you now that if everybody else doesn't improve at all, we'll be well and truly in that fight."

Although the rebuilding process may have taken longer than expected, Russell reckons the improvements the team made to the FW42 were "definitely there" and had it started the 2019 season with the car in its developed state it would have been able to get involved with the battle for points on a regular basis.

"Everybody has improved but we believe we should be improving at a much greater rate into next year than we improved over this year," he said.

"That's a big reason to be positive.

"If we [had] started [2019] with this car, we would have been fighting well and truly at the start of the year because we've put a decent amount of lap time on the car.

"But everyone else [improved as well, so] on the eye it does not look like we made that much progress, whereas we've [actually] made the same amount as everyone else has done.

Regarding Williams' targets for 2020 - when Formula 2 runner-up Nicholas Latifi joins the team - and the new rules era in '21, Russell explained "we want to see progress".

"I do believe that next year we will be stronger. Going to 2021, which will have all of those foundations built again, and it should definitely be well and truly on its way."