Red Bull driver Max Verstappen reckons Honda's breakthrough victories this season stopped the manufacturer questioning the point of being in Formula 1 after its difficulties since rejoining the championship.

Honda ended a 13-year win drought when Verstappen won the Austrian Grand Prix and has also celebrated its first pole position and one-two finish of the V6 turbo-hybrid era in a successful first year partnered with Red Bull.

Its long-term F1 future is not yet secure as it needs to reduce the cost of its programme, but it has taken initial steps to firming up its commitment by announcing this week it has extended its Red Bull and Toro Rosso supply deals to include the 2021 season.

Verstappen, speaking to select media including Autosport after triumphing against team-mate Alex Albon in a Red Bull camel polo contest in Abu Dhabi on Wednesday, said extending the deal was "better for everyone".

"I was never worried about it," he said when asked by Autosport if it came as a relief. "It was just trying to get the best out of what I have at the moment.

"I knew 2020 was happening anyway, but I was never really worried about [beyond that].

"Of course victories and podiums helped this year, for them to have the confidence and motivation to go further.

"Because if you don't do that you're really struggling and at one point a manufacturer will say 'What's the point of being in Formula 1?'.

"But I think this year Honda have made really big steps. Of course they had a tough time in the beginning when they joined F1 but they have learned a lot.

"I think they also get really excited. But as they said it's not only about victories, it's also costs and stuff.

"So I'm of course very happy that they're staying on board." 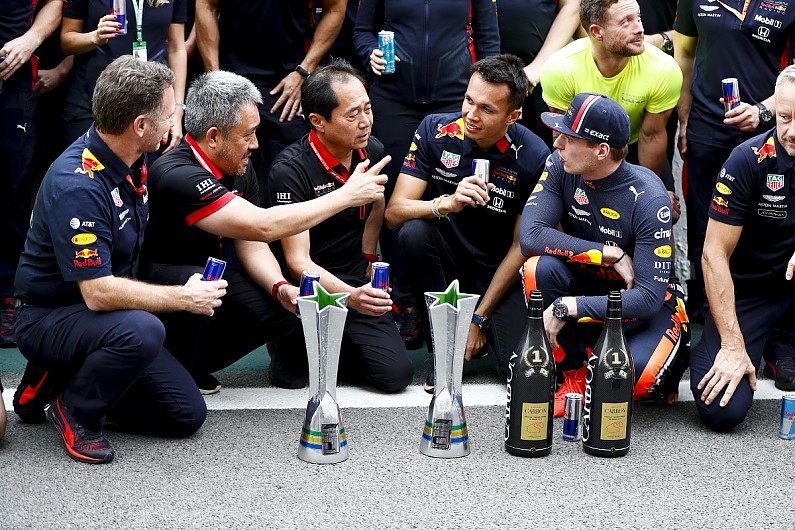 This season marked the first time Honda has supplied two teams since returning to F1 in 2015, having spent three difficult years with McLaren before only working with Toro Rosso in 2018.

Both Red Bull and Toro Rosso have finished on the podium this year, with both teams in the top three in Germany and again in Brazil, where Verstappen and Toro Rosso driver Pierre Gasly completed Honda's first one-two finish since the 1991 Japanese Grand Prix.

Earlier this week, Red Bull motorsport advisor Dr Helmut Marko said Honda's commitment was a "great relief" for the team because it could "plan" for the future.

"There are still further talks for a possible agreement for 2022 and 2023," Marko said in an interview with Red Bull-owned Servus TV.

"Then it will depend on how far the regulations allow a cost reduction.

"But the FIA has begun to recognise [this] and intends to freeze the engines from 2021, which means that further development will practically stagnate and then the costs will be drastically reduced once again.

"This is probably also a very decisive point for Honda, if it could come to another agreement."