The 23-year-old racer, who is contesting his second full campaign in grand prix racing, was unable to score a podium in his 12 races with Red Bull's main team this year, and was replaced by Alex Albon after the summer break.

But a race of high attrition among the top cars in Brazil gave Gasly a shot at a milestone result in Toro Rosso machinery, and when Mercedes driver Lewis Hamilton clashed with Albon on the penultimate lap, Gasly moved past both and into second place.

Gasly could be heard screaming in elation on team radio after the chequered flag, and admitted afterwards that he had been completely blindsided by the opportunity to score a top-three finish.

"To be fair, I didn't think this will happen [after] coming back with Toro Rosso during the second part of the season, but I just kept working on myself, tried to push the team as much as I could, telling them 'OK, we need to make the best out of all the opportunities we have until the end of the year'. And today it just came to us."

The result was Toro Rosso's second podium of 2019 after Daniil Kvyat's third place in the mixed weather conditions of the German GP.

Combined with Kvyat's 10th place, it vaulted Toro Rosso past Racing Point into sixth in the constructors' championship and to within eight points of Renault ahead.

Gasly was top of the midfield cars in qualifying, and comfortably headed F1's 'second tier' throughout the race as he looked poised for a seventh-place finish.

But as Valtteri Bottas' Mercedes expired and the two Ferrari drivers clashed, he thought back to his breakthrough fourth-place result in Bahrain last year.

"I felt good in the car the whole weekend and I think we managed to get the car exactly where I wanted," he said. "I said 'OK, if we finish best of the rest again in the race this will be amazing for us'. 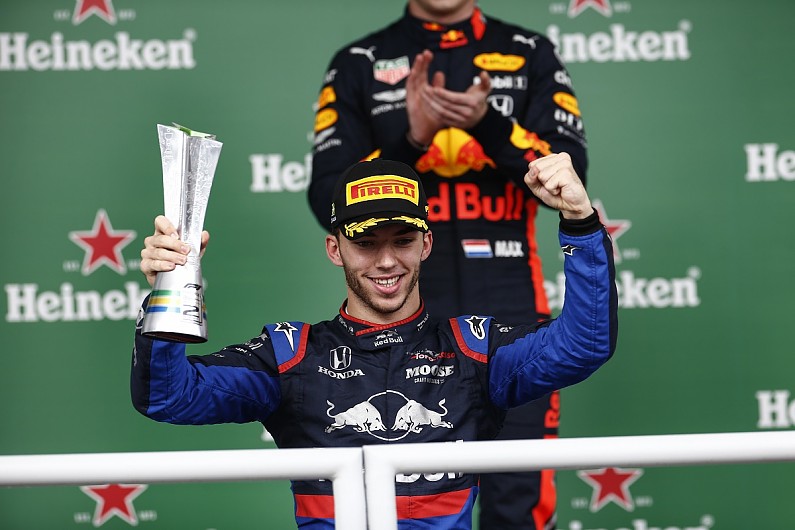 "So that's what we were doing. The whole race we had a good pace. I was controlling the gap with the guys behind but we always had quite a safe margin.

"I could push quite nice and even at the beginning of the race, I could see Albon and Charles [Leclerc] wasn't pulling away so much. So I think the car was working really well.

"When they [the top teams] started to battle, first the Ferraris, I was like 'OK, this looks quite similar to Bahrain 2018 in P4'. And then after I knew Lewis will try something [on Albon]."

Gasly said he got used to the feeling of standing on the podium throughout a successful junior single-seater career, but had come to "really miss" it since joining the F1 grid.

"it's something you want to experience and especially in Formula 1. And to be in second place between Max [Verstappen] and Lewis [Hamilton, who was later penalised], my first podium in F1 is just insane, amazing and really emotional for me."