Ferrari says it cannot explain why its pace was so bad in the United States Grand Prix after struggling to match Formula 1 rivals Mercedes and Red Bull.

Although Sebastian Vettel missed out on pole position to Valtteri Bottas by just 0.012 seconds in qualifying, Ferrari was in trouble from the start of Sunday's race.

First Vettel fell down the order complaining of understeer, then retired following suspension failure, while Charles Leclerc struggled for grip and could not keep pace with the leading cars.

Speaking about what happened, neither Ferrari or its drivers had a clear understanding of what went wrong.

"Not yet," explained team boss Mattia Binotto on whether he understood the performance swing from Saturday to Sunday.

Leclerc, who ended up a distant fourth, said: "On the first stint especially, I have got no explanation for that.

"Something really felt wrong, and we need to analyse and understand what was wrong with that.

"On the second and third stints, it was not as bad as the first one. We were still slower than the leaders but not as much as the first stint.

"So I think we need to analyse what happened on the first stint."

He added: "I had a lot of problems with the front in some of the corners, and it was pretty inconsistent all throughout the first run.

"But to be completely honest I have no answers to tell you what was wrong. It just felt like really, really poor grip." 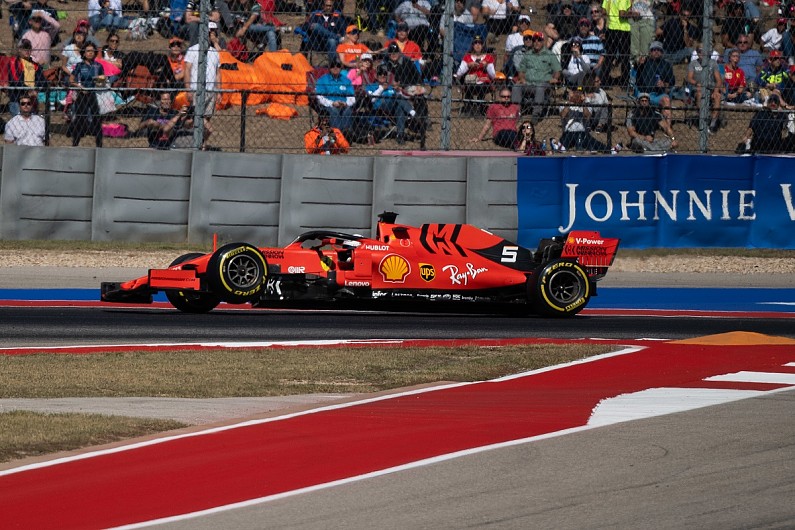 Binotto added there was no obvious explanation for what caused the significant understeer Vettel suffered in the opening stint, though said it was possible it was linked to the rear suspension issue that caused his retirement.

"It is not clear even if the suspension was broken from the very start - it could be," added Binotto.

"He [Vettel] got the initial feeling immediately that something was wrong with the car, so we may believe the suspension was broken.

"But from the data, and where eventually it has been broken, is not clear yet."

Vettel did not think Ferrari's Austin race issues were representative of the team's true performance, and is hopeful there will not be a repeat in the final races.

"I think it was clear that something didn't work," said the German.

"Obviously we have been not just a little bit behind but significantly slower, so I hope it is not an issue for the last two races.

"The mindset is clear. We want to win."

Leclerc added: "There are no reasons why it should continue so we will keep pushing."