Romain Grosjean says the Haas Formula 1 team did not want to "touch" the aero package he used in United States Grand Prix practice again after his unexplained Friday crash.

Grosjean suffered a high speed accident in second practice at Austin when the back end of his car got away from him in the fast downhill sweeps in the track's first first sector.

Even after a night of analysis, Haas was unable to pinpoint why Grosjean experienced a dramatic loss of rear downforce.

He had begun Friday using Haas's older-specification endplates and T-wing, before putting the full 'Hockenheim spec' rear wing on for the session in which he crashed.

"We tried an update package and it's got a big issue in high speed corners, and basically I lost the car for no reason," said Grosjean, who went on to qualify 15th on Saturday.

"It's just the rear downforce decided to go and they can't explain. They said 'this package, we don't touch it anymore'.

"So obviously then [for FP3] you revert to FP1 [settings] and then we had problems with the rear wing."

That led Grosjean to revert to the complete old spec of rear wing package for the rest of the weekend - leaving him at a straightline speed disadvantage to team-mate Kevin Magnussen, who qualified two tenths of a second faster in 12th. 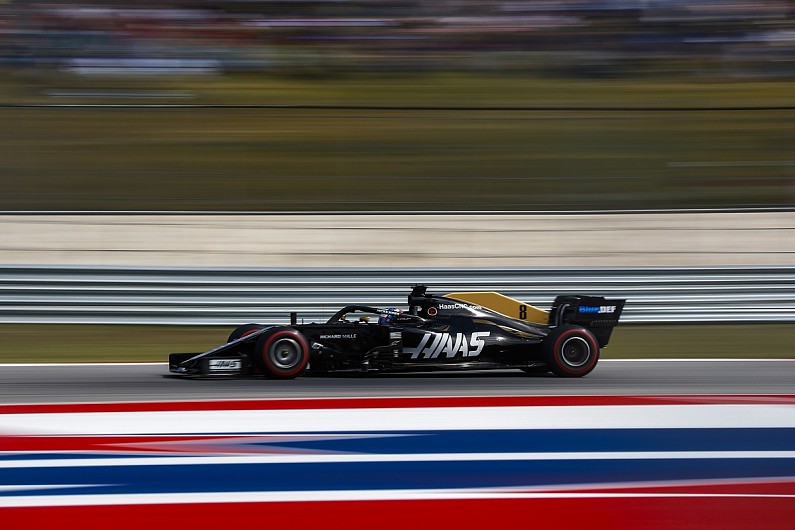 "I said to the guys, 'the car doesn't feel the same as it was in FP1', and then they could see on the data that we had problems with the rear wing," he explained.

"So we had to change the rear wing and not take the risk, and I had to run a very heavy rear wing in terms of drag.

As well as the rear wing choice hurting his form in qualifying, Grosjean is fearful about what impact it will have in the race.

"I'm like slower by 15km/h compared to the competitors, so I'm a sitting duck," he said. "It's not great.

"We've had a fair bit of issues in the weekend and just all in all it is a long season.

"It's hard to keep your head up. You're in your own race and there is nothing you can do and you're bloody slow on the straight. It's painful."