Sebastian Vettel says there are no changes to explain his "step in performance" at the Japanese Grand Prix, where he ended Ferrari Formula 1 team-mate Charles Leclerc's qualifying superiority.

Leclerc had qualified on pole for the previous four grands prix, a run that stretched his dominant run over Vettel in qualifying to nine races.

Suzuka marked the first time Vettel had outqualified Leclerc since June's Canadian Grand Prix, which was also the last time Vettel was on pole.

Asked if he had enjoyed a breakthrough during the Japan weekend, Vettel said: "Not really, just a clean [qualifying] session.

"I don't think there was a particular problem. We've been improving the car since Singapore, the update has helped me in areas where maybe I struggled a bit before.

"Overall qualifying sessions on my side didn't go entirely smooth. Maybe that one just went quite smooth - both laps were clean, I had no issues preparing the lap.

"[There is] nothing that has changed. We didn't change the car for here.

"[There is] nothing that would explain the step in performance."

Vettel has struggled more with the SF90 than Leclerc, who was generally the quicker of the two Ferrari drivers in the first half of the season when the car was more inconsistent.

Since the major aerodynamic upgrade Ferrari brought to Singapore Vettel's form has improved, but Japan was the first time he looked like he had an advantage over Leclerc. 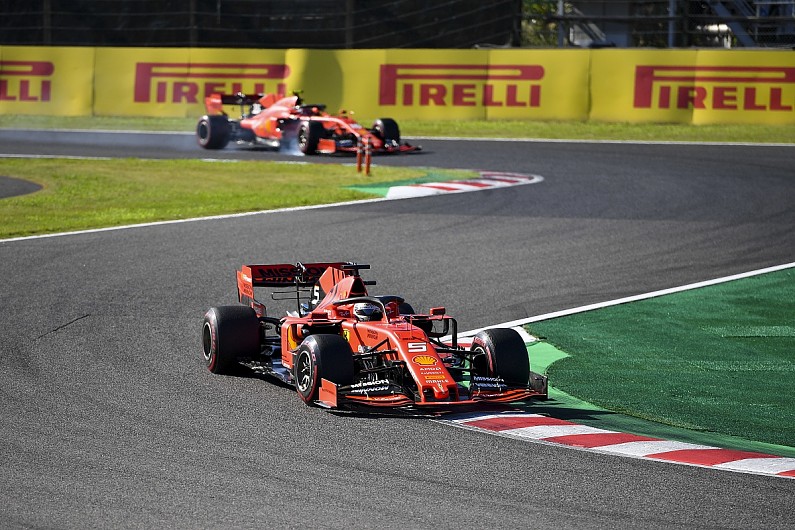 However, Vettel botched the start, which meant he could not capitalise on his qualifying result, although he avoided a penalty and was able to finish second.

"I was doing what I normally do [at the start]," he said. "I had a very poor start because I moved a little bit, stopped, then lost all the momentum.

"So overall I lost compared to a normal start. It was a mistake. [So] there was a reason, but not a great reason!"

Vettel's pole had looked extremely unlikely on Friday when Leclerc ended practice marginally the faster Ferrari driver but neither was as competitive as the two Mercedes.

"Because we [were] maybe on different programmes, I don't know how they [Mercedes] were running.

"But focusing on ourselves we had some car issues on Friday, [there was] quite high degradation, and we worked through the set-up for the quali and the race.

"We dropped the rear wing for quali and the race, which helped the front balance, and the [drivers said the] car felt better.

"We've got the right pace in quali but not in the race. We've got degradation, higher at least to our competitors."