The Ferrari Formula 1 team's decision to ask the FIA to review Sebastian Vettel's Canadian Grand Prix penalty has left many questioning whether it has a strong enough case.

Vettel lost his win in Montreal thanks to a five-second penalty that he was given for rejoining the track in an unsafe manner and forcing Lewis Hamilton off the circuit after he made a mistake at the first chicane with 22 laps to go.

While Ferrari elected not to go through with an appeal on the penalty - mainly because in-race time punishments like that cannot officially be appealed - it lodged paperwork with the FIA on Monday requesting a review under article 14 of the International Sporting Code.

The team has not spoken in public about what it is pulling together, but it is understood that the 'significant and relevant' new evidence it will present includes GPS data, extra telemetry and the witness testimony of Vettel himself - who could not be asked for his opinion about the incident before the stewards punished him as it was decided mid-race.

Should the new elements be accepted by the stewards as sufficient to justify re-examining the case, then matters could get interesting because central to Ferrari's argument will likely be the use of the FIA's own rulebook to show that Vettel did no wrong.

What the rules do and don't say

The first breach Vettel is accused of is rejoining the track in an unsafe manner.

The rules regarding this are covered in both the ISC and the Sporting Regulations, which are clear about what is expected of drivers who run off the circuit.

Article 27.3 of the Sporting Regulations states: "Drivers will be judged to have left the track if no part of the car remains in contact with it and, for the avoidance of doubt, any white lines defining the track edges are considered to be part of the track but the kerbs are not.

"Should a car leave the track the driver may rejoin, however, this may only be done when it is safe to do so and without gaining a lasting advantage."

The FIA says that Vettel moving across on Hamilton shows that he did not rejoin safely. 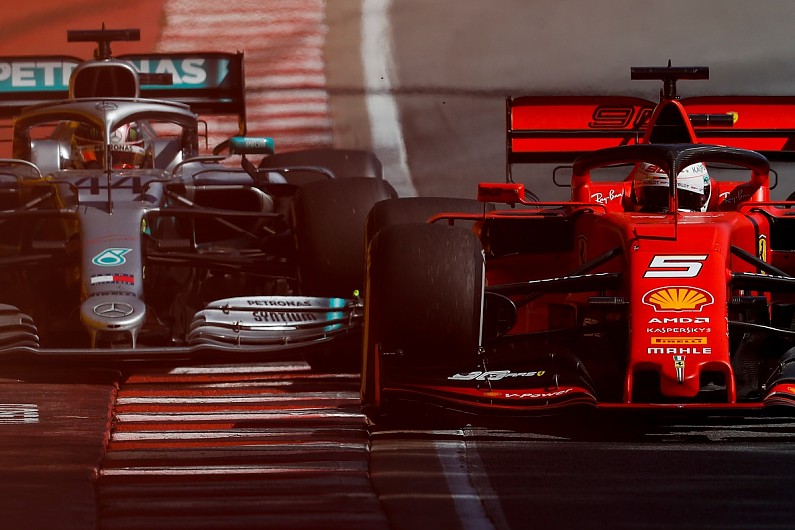 One of the key reasons for the FIA stewards coming to this conclusion was the use of secondary steering wheel movements from Vettel after an initial oversteer moment as he rejoined the track.

The argument was that at the moment Vettel was back in control of the car, and it was felt that he had the option to steer to the left to give Hamilton room on the right but instead his release of the wheel was a deliberate attempt to edge wider and block Hamilton.

The rules are clear on when a driver will be deemed to be in the wrong when it comes to defending in this kind of situation - and there are three key regulations governing this.

Article 27.4 of the Sporting Regulations states: "At no time may a car be driven unnecessarily slowly, erratically or in a manner which could be deemed potentially dangerous to other drivers or any other person."

Appendix L to the ISC, Chapter IV., Art. 2 a) states "A car alone on the track may use the full width of the said track...

Article 2 b) adds: "More than one change of direction to defend a position is not permitted.

"Any driver moving back towards the racing line, having earlier defended his position off-line, should leave at least one car width between his own car and the edge of the track on the approach to the corner.

"However, manoeuvres liable to hinder other drivers, such as deliberate crowding of a car beyond the edge of the track or any other abnormal change of direction, are strictly prohibited." 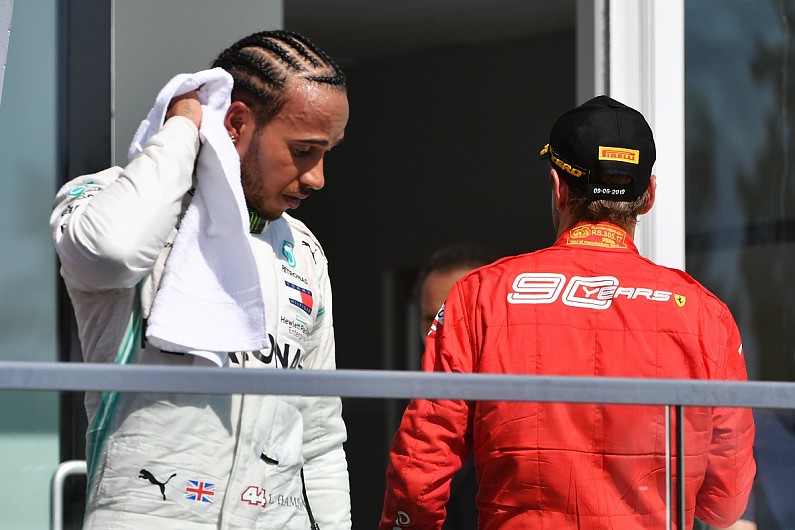 Vettel's testimony, allied to video footage and the GPS and telemetry data, may provide a wealth of information as to why Ferrari feels its driver did not 'deliberately crowd' Hamilton off, nor drive erratically - especially because at the moment he rejoined the circuit the Mercedes car was still some way behind him.

It is believed that a specific piece of GPS data comparing Vettel's line through the sequence of corners on the lap before the incident to when the moment with Hamilton happens shows that the positioning of his car at the exit of Turn 4 is not dramatically different.

In fact, Vettel was actually further away to the left from the edge of the circuit than he had been on the lap before, so there was more room on the outside.

Therefore the argument is likely to be that Vettel did not put his car in a place that should have caused the pursuing Hamilton to be surprised.

Much has been made of the rule that says drivers must leave: 'at least one car width between his own car and the edge of the track.' This has been especially valid when comparisons have been made between what Hamilton did against Daniel Ricciardo in Monaco in 2016 and what Vettel did in Canada. 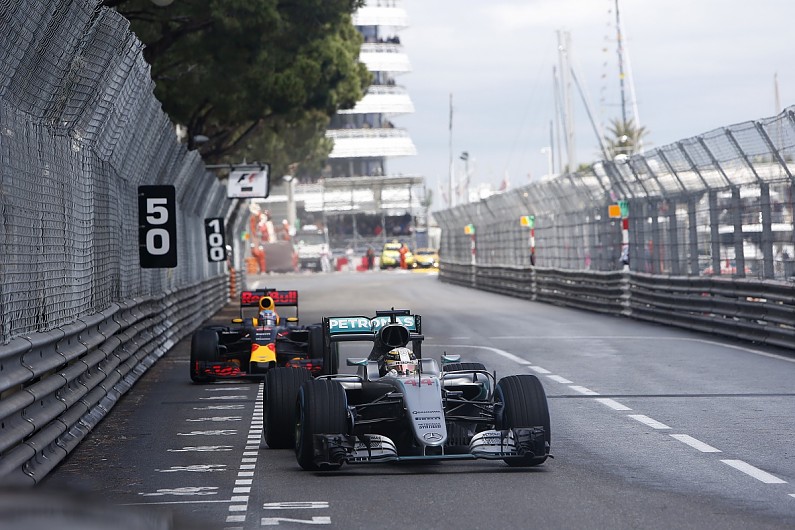 But that regulation does not strictly count in this instant, as that rule when read in full is only in reference to drivers who have earlier defended their position by moving off line. Vettel had made no previous move to defend his position away from the racing line.

Regarding the argument that Vettel should have steered more to the left after he rejoined the circuit, there is no regulation in either the sporting rules nor the ISC that states a driver must move away from the racing line and concede a position in such circumstances.

In fact, the only time that drivers are requested to let rivals through is if they have gained an unfair advantage.

That does not count in this case because Vettel did not gain any advantage from running off - as Hamilton ended up around 1.7 seconds closer to him after the incident than he was beforehand.

A factor in the Vettel punishment was the fact that Hamilton had to take avoiding action, by braking and edging himself off the circuit, to avoid a collision.

It was Hamilton's response that left the stewards convinced that Vettel had 'forced' the Mercedes off the track.

But there are two issues here that could be important to the positioning of Hamilton's car during the incident.

The first is that the normal racing line through that corner is already well over to the right, with drivers regularly dipping the right half of their car over the kerbs as can be seen in this image. 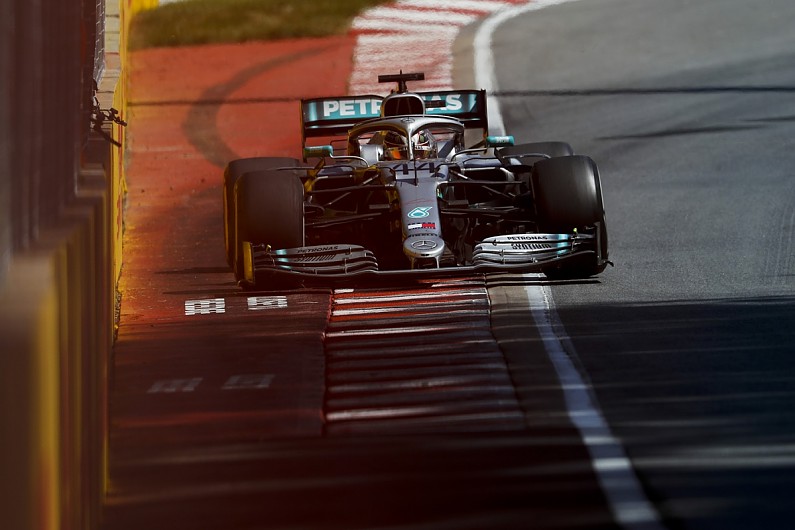 So in avoiding a collision with Vettel, Hamilton was still substantially in the same position as on a normal lap - and certainly not in an extreme position that could be spotted easily through Vettel's mirrors.

Secondly, there may well be some scrutiny requested about whether Hamilton actually left the circuit during the incident.

F1's regulations are clear about what the definition of the track boundaries are.

Appendix L to the ISC, Chapter IV., Art. 2 c) states: "Drivers must use the track at all times. For the avoidance of doubt, the white lines defining the track edges are considered to be part of the track but the kerbs are not."

This is reinforced by F1's Sporting Regulations. Article 27.3 which states: "Drivers will be judged to have left the track if no part of the car remains in contact with it and, for the avoidance of doubt, any white lines defining the track edges are considered to be part of the track but the kerbs are not."

The explanation of the white line is crucial here because it is not crystal clear from video footage and photographs whether or not all of Hamilton's wheels were outside the white lines that marked the edge of the circuit during the moments when Vettel was deemed to be moving across.

Ferrari's view may well be that it does not believe Hamilton ever actually officially left the circuit. 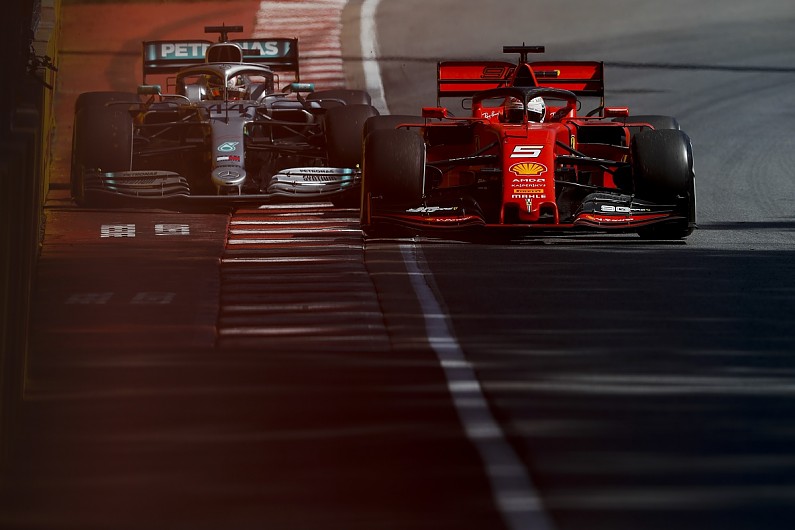 While not all the arguments and rule interpretations may be accepted by the FIA - and the case could be closed off swiftly if it is deemed the new evidence is not good enough - what is clear is that the Vettel matter is not the open-and-shut case that some have suggested.

And the matter could become critical to how F1 moves forward regarding driving standards regulations.

While the Vettel penalty prompted calls for an end to the 'nanny state' of too much policing of driving, if it is ultimately decided that he did no wrong - and the rules are only there to stop dangerous or deliberately unfair driving - then maybe it can be proven that their presence has a use.