Charles Leclerc edged out the Mercedes of Valtteri Bottas to top third practice for the Monaco Grand Prix after Ferrari Formula 1 team-mate Sebastian Vettel crashed out early on.

Leclerc ended the session 0.053 seconds faster than Bottas, with Lewis Hamilton a fraction behind, as circumstances conspired to prevent the rapid Red Bull of Max Verstappen from setting a more representative time. Verstappen ended the session fourth ahead of team-mate Pierre Gasly.

The Mercedes W10s carried red halos for the first time this weekend in deference to the passing of Niki Lauda, but both drivers ultimately failed to prevent the timesheet wearing red up top.

Bottas set the pace in the early running with a 1m12.238s, just a few tenths up on Vettel and Leclerc, but since Thursday's practice yielded times in the 1m11s bracket there remained plenty of room for improvement as the track evolved.

Hamilton's arrival on track was marginally delayed by last-minute adjustments to his W10 and when he did get going, just 10 minutes into the session, he complained of vibrations from the front axle. Nevertheless he soon got up to speed and had just demoted Vettel when the Ferrari departed the scene.

Vettel locked his front-right wheel and went off into the outside barrier at Ste Devote after completing just seven timed laps. 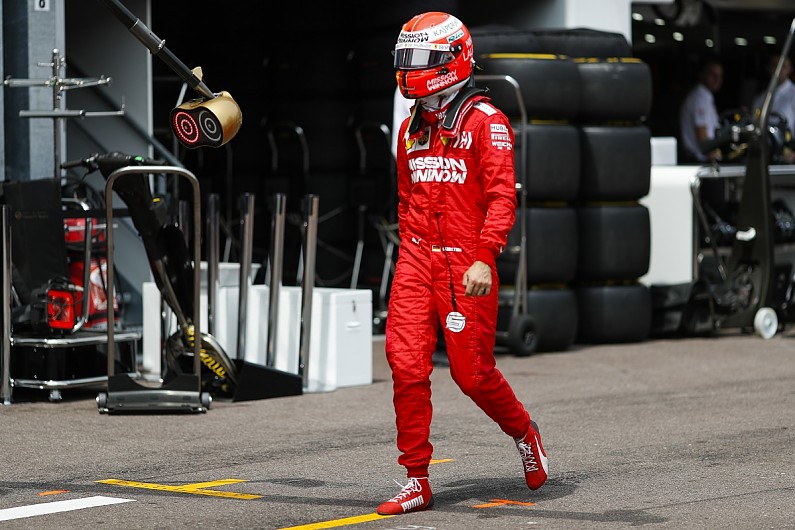 As Vettel's car was craned off the track and the lap times began to tumble, Verstappen rose to become the principal challenger to the two Mercedes.

By the end of the first runs Bottas was fastest of all with a 1m11.835s he clocked up towards the close of a 13-lap stint, while Hamilton was just 0.199s in arrears.

Verstappen was a further tenth off but running a shorter 10-lap stint, and seemingly unable to keep the tyres alive over a single lap - either being slow in the first sector but in the Mercedes ballpark in the final third, or vice versa.

Having failed to string together a properly quick lap in his opening run, Leclerc responded with a sizzling 1m11.265s lap at the beginning of his next stint, topping the timesheet by 0.053s as Bottas improved to 1m11.318s and Hamilton to 1m11.478s.

Verstappen's push laps during his second stint were frustrated by traffic and a brush with the barrier at Rascasse; had he been able to connect all the dots, his theoretical best at this point was 1m11.270s rather than the 1m11.539s he registered when crossing the line.

Hamilton was the first of the frontrunners to leave the pits for a qualifying simulation with three minutes of the session to run, followed in short order by Leclerc and Bottas, but traffic militated against any of them improving their times.

Antonio Giovinazzi was 'best of the rest' in sixth for Alfa Romeo behind Gasly, albeit half a second off the Red Bull's pace, with a 1m12.170s set late in the session.

Vettel was classified 14th as neither the McLarens, the Racing Points nor the Williams were able to surpass his early time.