Charles Leclerc set a stunning pace in final practice for the Azerbaijan Grand Prix as the Ferrari team outpaced its Formula 1 rivals by more than a second.

The 21-year-old was quickest in Friday practice and reinforced his early control of the Baku weekend in emphatic fashion in the Saturday session, which he led for its majority and eventually topped ahead of team-mate Sebastian Vettel.

Leclerc, seeking his first F1 win, set a 1m41.604s that briefly put him 1.2s faster than anyone near the end of the session.

Vettel lapped 0.198s slower than his young team-mate to complete Ferrari's one-two, with Max Verstappen next up for Red Bull on a 1m42.852s.

Mercedes drivers Valtteri Bottas and Lewis Hamilton were stuck in the 1m43s in fourth and fifth.

Leclerc was 0.3s clear of Vettel at the halfway point of the session, with Hamilton the same distance back in third after a longer run on medium tyres.

Switching to softs hauled Hamilton and Bottas closer to the Ferraris, with Hamilton initially edging his team-mate by 0.06s before eventually losing out by just over a tenth.

Both were overhauled by Verstappen when the Red Bull driver punched in a 1m42.852s to split the Ferraris and go second, just 0.2s behind Leclerc.

Leclerc then put an enormous gap between Ferrari and the rest of the pack with a 1m41.604s on a fresh set of softs to go 1.2s clear at the top.

Vettel's efforts to match his team-mate were hindered when he locked his left front and ran deep into Turn 1, where he took to the escape road.

His second effort was tidier, and allowed him to improve to a 1m41.802s.

Hamilton also made mistakes, ending up on the escape roads at Turn 2 and Turn 15, as neither Mercedes showed the sort of pace the team is likely to have in qualifying. 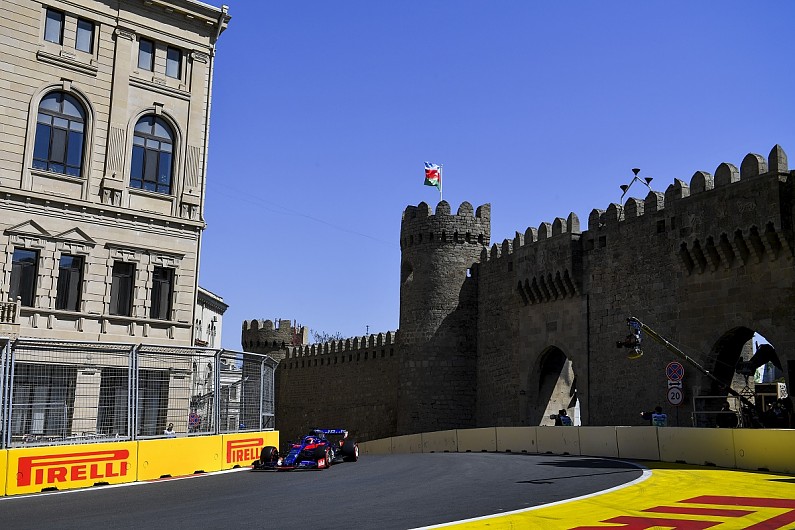 Toro Rosso was a surprise best of the rest, with Daniil Kvyat sixth fastest and 1.6s off the pace.

Raikkonen was involved in a minor incident with Carlos Sainz Jr near the end of the session as the two drivers appeared to race each other through the end of the final sector and down to Turn 1.

They did not make contact although Sainz complained to his McLaren team over the radio after the bout of slipstreaming.

George Russell completed an early installation in his new Williams chassis following the drain cover incident he suffered at the start of Friday's abandoned first session.

Among the changes Williams has had to make around the new chassis is a new floor, while it also has new Mercedes control electronics and energy store.

The Formula 2 champion went on to complete 20 laps as he clocked his first real Baku mileage in an F1 car, and though he was outpaced by team-mate Robert Kubica by 0.3s he was not the slowest.

That place fell to Pierre Gasly, as the Red Bull driver ignored performance running in preparation for his pitlane start - though his difficult weekend continued with a near miss with the wall that took him down an escape road.