After Ferrari's pace in Bahrain, where it was fastest but failed to win due to Charles Leclerc's late mechanical problem, the Chinese round was dominated by talk of its top-speed edge and Mercedes' fears it would be difficult to catch up if Ferrari's superiority was on the engine side.

But whatever advantage Ferrari was finding in a straightline at Shanghai did not prove decisive, as Mercedes swept to a front-row lockout in qualifying and one-two in the race.

Asked if he was surprised by Ferrari's performance, Wolff said: "Yes, I believed their straightline advantage, especially in the opening laps, would be a danger for us. And when DRS was enabled, even more."

He suggested that Mercedes had a corner speed edge that was allowing it to counteract Ferrari's straightline pace.

"We didn't see them coming anywhere near so I think our exit onto the main straight out of Turn 13 was very good," Wolff continued.

"We were able to pull a little gap there, so they were never close enough.

"But it came as a surprise."

Ex-Mercedes driver Nico Rosberg said after the grand prix that Ferrari's car was "in the wrong place" aerodynamically and needed "a lot of work" to be fixed.

Wolff admitted the balance between downforce and drag was tough to strike, but even though Ferrari tried to add more rear wing over the weekend he believes its "straightline performance is still very strong". 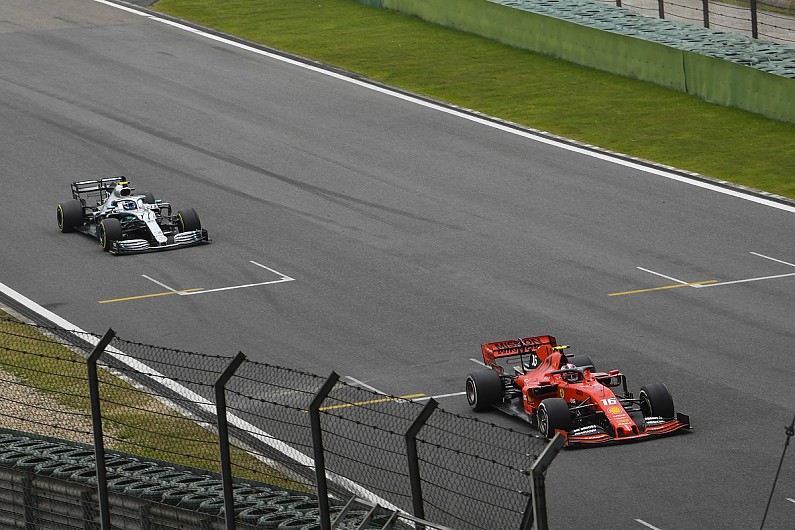 "In the race it was not as strong as in qualifying, but still impressive," said Wolff.

"With every team you need to get the balance right between the drag power and downforce level.

"You want a draggy car to be fast through the corners, but equally not to lose time on the straights.

"And getting that balance right is very difficult."

Wolff's Ferrari counterpart Mattia Binotto suggested after the race that the difference in straightline speed was not as significant as was being made out.

That followed Charles Leclerc saying earlier in the weekend that Mercedes was "much closer than what they try to make people think".

"If you look at the speed of Mercedes this weekend, I thought they were very strong as well," said team principal Binotto.

"So maybe we should ask them how they are so good this weekend.

"But I don't think there is much on the straights between us and the others."

Ferrari has been tipped by some to strike back at the next race in Azerbaijan, because of its ultra-long flat-out run from the end of the final sector to the first corner.

But Binotto pointed out that the rest of the Baku lap is a slow-speed city circuit.

"Baku is a circuit where you've got a different aero configuration," he said.

"It's not only the straight in Baku, it's a lot of corners, it's a city circuit and very difficult in that respect."