Ricciardo had to pit on the first lap after losing his front wing when he hit what he described as a "gutter ditch" while taking to the grass off the grid, and later retired as a result of overheating issues triggered by damage.

His team-mate Nico Hulkenberg, who had qualified one place ahead of Ricciardo in 11th despite electrical problems in Q2, had a strong run to seventh.

Abiteboul said Renault had not yet seen the best of its high-profile new signing.

Asked by Autosport if Ricciardo had brought Renault everything it expected from a GP winner, Abiteboul replied: "Let's be honest, I can't say that after the weekend we had together.

"We need collectively to do better. It's a learning exercise, as we always say.

"When you change driver you make some steps backward before you step forward. That's what we're going through as we speak." 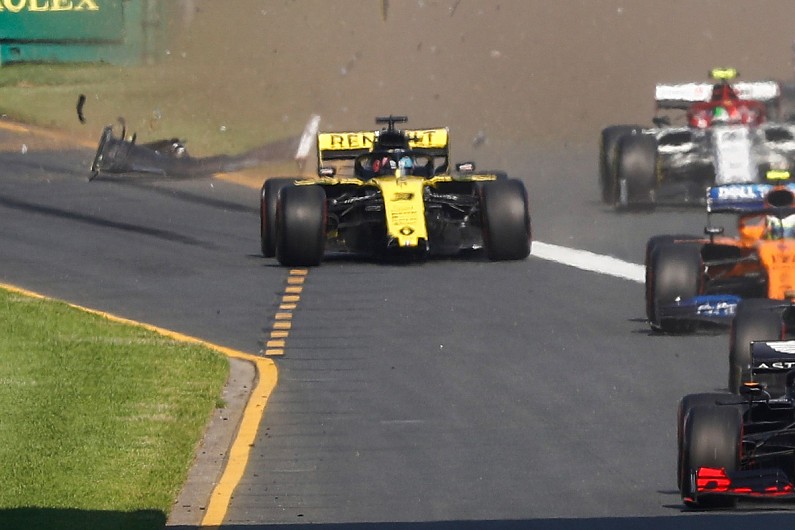 Abiteboul admitted that the first lap incident was frustrating.

"Daniel didn't have the same luck as Nico, who was also trying to regain some positions at the start," he said.

"Obviously it was a bit extreme.

Ricciardo said he had never expected to sustain so much damage from taking to the grass on the startline.

"I hope they can fix that [hole] for the future, because I guess it can be a bit dangerous," Abiteboul said.

"Having said that it's not necessarily a place where the car is supposed to be, but we all know that at the start it can happen. Still, it was a bit strange."

"It's a good turnaround from qualifying with Nico," he said.

"But I think we need to give huge credit to him - an excellent start, excellent first lap, and then a very good execution from the team in terms of strategy and management of everything that needs to be managed in modern F1 by Nico - tyres, fuel, DRS, energy, you name it.

"It's been quite remarkable. But I would say we need to make his life a bit easier, both in qualifying, to have a better start position, and in the race."