The driver line-up for Formula 1's first 2019 pre-season test at Barcelona has taken shape, including Kimi Raikkonen being at the wheel for Alfa Romeo's return as a fully-fledged F1 entrant.

Raikkonen will drive on the first of the four days in Spain as Alfa kicks off its 2019 campaign, having taken over the title of Sauber's entry.

The 2007 world champion has already been pictured driving the Alfa in a shakedown run at Fiorano earlier this week.

Raikkonen and team-mate Antonio Giovinazzi will alternate the remaining days.

Alfa's 2019 F1 car will be formally unveiled in the pitlane before the start of testing as part of a busy Monday morning of spotting new machines and liveries.

Red Bull's RB15 is yet to appear in its 2019 colours, while Haas has only released online imagery of its car for this year.

Racing Point's 2019 car has not been revealed at all but the team has confirmed Sergio Perez will be first behind the wheel of the RP19 on Monday.

Eleven drivers are set to be in action on the first day of testing, but Williams pair Robert Kubica and George Russell - who were due to share Monday duties - will not be among them as the team has delayed the start of its programme because its car will not be ready in time. Williams is another team that has only shown digital renders of its 2019 design so far.

Reigning world champion Mercedes is planning on splitting duties between Valtteri Bottas in the morning and Lewis Hamilton in the afternoon.

The rest of the team's schedule will be determined day-by-day, as programmes and scheduled driving times can often be altered during testing. 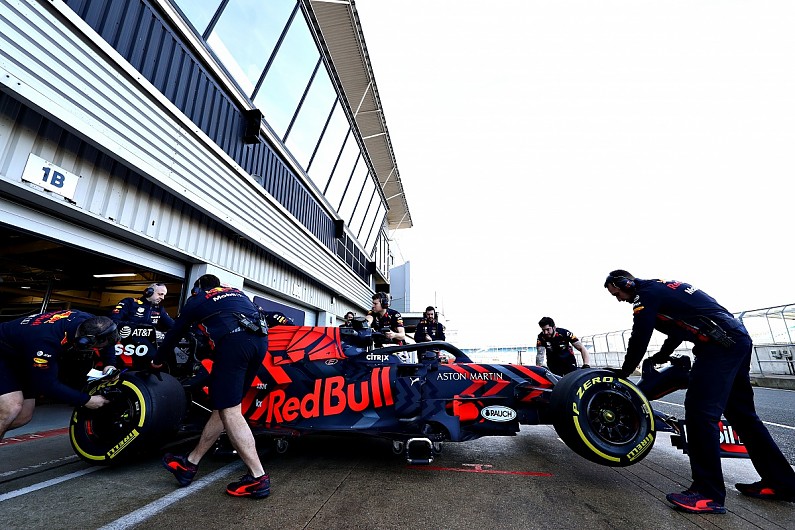 Max Verstappen will swiftly get the insight into Red Bull's new engine partner Honda he craves after being given Monday duties in the new car, before alternating with Pierre Gasly for the rest of the week.

Renault's new signing Daniel Ricciardo had his first taste of the team's 2019 car in a shakedown run on Saturday.

Nico Hulkenberg will be on Renault duty on Monday morning, before the two drivers alternate half-days through the test.

Ferrari's 2019 programme will begin with Sebastian Vettel at the wheel, while Carlos Sainz Jr kicks off his McLaren career by taking charge of the MCL34's maiden outing.

Toro Rosso returnee Daniil Kvyat has been given the nod over the team's rookie Alexander Albon to kick off the week and Romain Grosjean will be behind the wheel of the Haas VF-19 on Monday.

Haas and Williams are the only teams to have indicated that they will run non-race drivers so far, deploying Pietro Fittipaldi and Nicholas Latifi respectively for parts of the week.