Renault signing Daniel Ricciardo for the 2019 Formula 1 season made its staff as upbeat as they were during the title-winning Fernando Alonso era, says Cyril Abiteboul.

Ricciardo's switch from Red Bull to Renault was one of F1's biggest shocks last year, and ignited the silly season that shook up the 2019 grid - where only two teams go into the new season with unchanged line-ups.

Renault is targeting the leading three teams of Mercedes, Ferrari and Red Bull in the near future, and recently claimed it has had its biggest ever gains over the winter ahead of 2019.

Why F1 needs Renault's 'biggest gains' to be real

Reflecting on the signing of Ricciardo, Renault's F1 managing director Abiteboul said that the way his staff in England and France reacted to the news was similar to its championship-winning glory years with Alonso in 2005 and '06.

"It was obviously a huge relief, fantastic news - and the way it was welcomed in the factories at Viry and Enstone was just amazing," Abiteboul told Autosport.

"I was expecting something, but nothing in relation to what I have been able to witness.

"It was a fantastic moment. I have never seen a reaction like that in either of the two factories. It was reminding me of the titles with Fernando Alonso in 2005 and 2006. 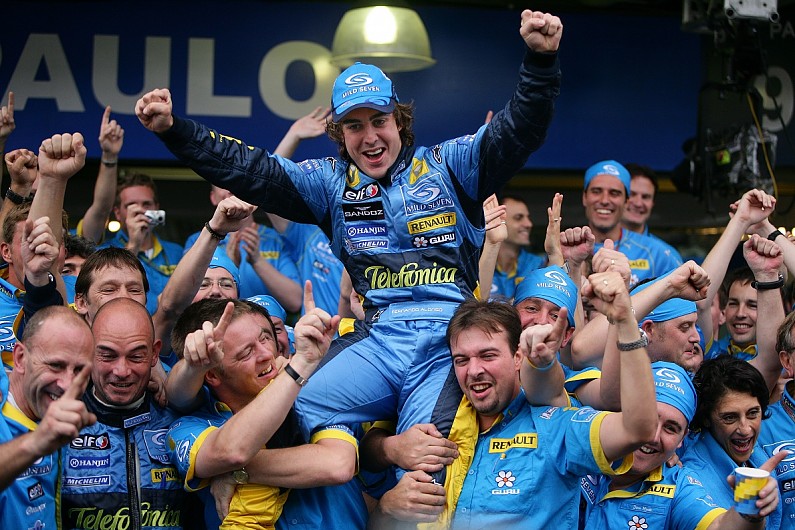 "We have not won anything, but there is this feeling that now we are really on a trajectory to be able to win something."

Abiteboul added that having a race-winning driver on board put extra pressure on Renault.

"We really feel now this obligation to come up with an engine and a chassis that will be capable of giving what that guy deserves," he said.

"We feel more obliged towards Renault, towards our sponsors, towards our fans, towards the legacy of the Renault brand in motorsport, because I don't want to look at disappointment or frustration in his eyes over the next two years.

"I don't want to feel what McLaren must have felt with Fernando over the past few years."

Abiteboul said Ricciardo is aware of Renault's current operating level and does not have unrealistic expectations.

"I was clear to Daniel that if he was expecting a team that is a turn-key organisation - a turn-key car where everything is ready and everything is prepared - and his only contribution will be to drive to a fantastic level, but just to drive, he should look elsewhere," he said.

"We are expecting from him to be an ambassador, a leader and to bring his experience and his expertise into the team.

"We have added a lot of ingredients into the team, a lot of assets, a lot of people, a lot of headcount, but now we need that extra sparkle.