The Mercedes Formula 1 team was convinced Lewis Hamilton's engine was on the brink of failing just before half-distance in the Brazilian Grand Prix.

Quick work by engineers and adjustments in the cockpit by the world champion ensured that it survived and allowed him to stay ahead of Max Verstappen and claim victory as Mercedes clinched the 2018 constructors' title.

On lap 28 of the 71-lap race Mercedes HPP power unit engineers reported that a failure was "imminent" for Hamilton, due to an exhaust issue that had led to high temperatures.

At the time he was urgently trying to make up ground after his early pitstop dropped him out of the lead.

"We have the engine guys here in the back, and then we have them back at base," team principal Toto Wolff explained.

"I have about 10 channels open, and what I could hear on the meeting channel was 'Lewis Hamilton, power unit failure imminent. It's going to fail within the next lap.'

"And I put the volume up and said, 'Excuse me, what?' And they said, 'Yeah, we have a massive problem on the power unit, it's going to fail on the next lap.'

"But it didn't fail the next lap, and I said, 'When you guys have a minute, tell me what's happening.'

"[They said] 'Well, our exhaust is just about to fail, and we're overshooting all the temperature limits.' I said, 'So what's the fix?'

"They started to fix it by turning the whole thing down. The temperatures went down to below 1000, to 980 degrees. But it's still too high! That was truly horrible."

Wolff admitted he was surprised the car finished the race. 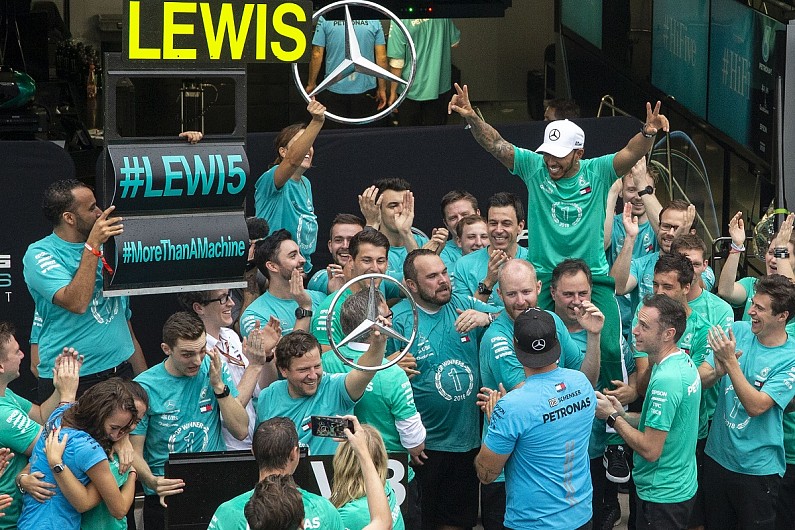 "God only knows how you can fix hardware that's just about to break and make the car finish," he said.

"That race was just a nightmare until the chequered flag came down, and everything broke loose."

Hamilton was aware of the problems and told to change settings in an attempt to protect the engine.

"I could feel it," he said when asked about the issue by Autosport.

"There was a lot of great work that went on in the background with the engineers here, and back in the UK, who were really working on understanding what they've got to turn down and tweak.

"They threw a lot of balls at me whilst I was juggling with the other stuff.