Romain Grosjean says this year's German Grand Prix was the crucial point he knew he had turned around his form and could save his Formula 1 seat with Haas.

The American team announced last week that it will field Grosjean and Kevin Magnussen for a third year in 2019.

Grosjean has been with Haas since its debut in 2016 but his place was under threat following a bad run of form earlier this year that included high-profile errors in Azerbaijan and Spain.

The Haas driver qualified sixth for the German GP, and was running comfortably in the top 10 before pitting for ultrasofts under a safety car later in the race.

That initially dropped him out of the points, but set him up for a charge through the order to sixth that included a last-lap move on Sergio Perez.

Asked to pinpoint a key moment in his turnaround, Grosjean said: "Germany. It was the point and I knew it, I found what the issues were before and worked them through.

"I knew from Germany I was back on form."

Grosjean was denied a likely top-five finish in the season opener in Australia but Haas botched its pitstops and both cars retired.

That prompted a point-less run of eight races at the start of the year that was ended emphatically in Austria, where Grosjean finished fourth to record Haas's best result in F1.

"Things had to turn at one point," he said.

"The season looked worse than it was actually was sometimes because of bad luck.

"Bahrain I was in the points and lost half the car [when bodywork broke], then Canada I think I was scoring points and didn't make qualifying.

"Silverstone was the time when [I thought], 'OK, I need to understand things and make sure that things are going my way all the time'.

"Then Germany and Hungary I knew I was back on track." 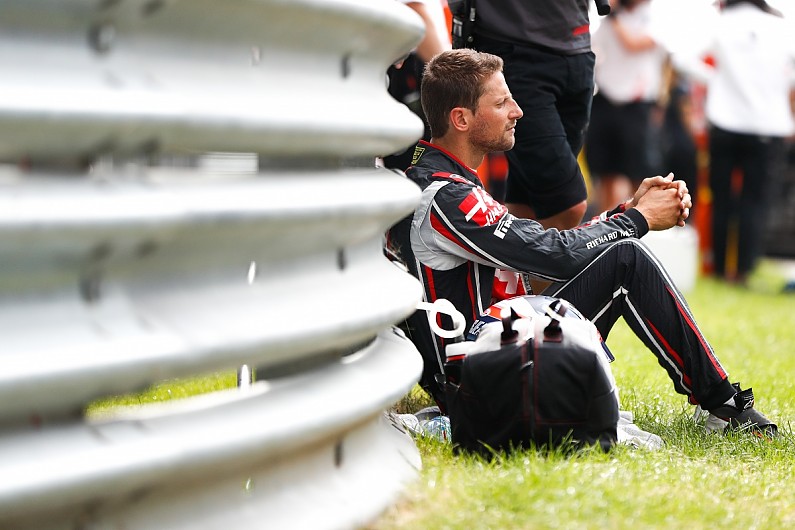 Grosjean said he had changed "a few personal issues from work life to personal life" that became "a big thing" when combined.

He praised the team for giving him the opportunity to address his form before making a decision.

"They know what I have done for the team and I think they were patient and that was great," he said.

"They are racers and they do understand racing and there were no reasons for me not to be the same as before.

"There are a lot of drivers willing to drive for no money or no salary, so it is not easy to keep your seat.

"But experience is something you cannot buy and I guess for a team like Haas that is still developing and growing, an experienced driver is very important."