Sauber Formula 1 driver Charles Leclerc believes Toro Rosso played "a bit of a game" during the Monaco Grand Prix by getting Brendon Hartley to slow down others.

Toro Rosso's Pierre Gasly ran a very long first stint to rise from 10th to sixth but looked as though he would drop out of the points as others stopped earlier and eradicated his pitstop window.

Hartley was 12th, heading a group of midfield contenders that moved into points contention by stopping earlier, and just 15 seconds behind Gasly on lap 26 but had dropped to 28s back when Gasly pitted 10 laps later.

"That was so frustrating," said Leclerc, who was bottled up behind Hartley. "I think Toro Rosso has played a bit of a game.

"Brendon was clearly slowing down at one point. We were like 2.8s slower than the laps we were doing at the end of the race.

"Before that we were in a very good place to score points, theoretically."

Gasly defied all expectations for hypersoft tyre management by extending his opening stint so long, which he admitted was an improvisation from his team as it monitored the performance of the otherwise unpopular compound.

At the beginning of the phase that re-established Gasly's pitstop window, Hartley caught a five-car train led by Nico Hulkenberg, who was also running long.

Hartley fell away from that group during an erratic spell in which his laptimes rose into the 1m20s, having been consistently 1m18s before.

It took Hartley another dozen laps after Gasly stopped before he started to consistently improve again, which Hartley said was down to the front tyres graining. 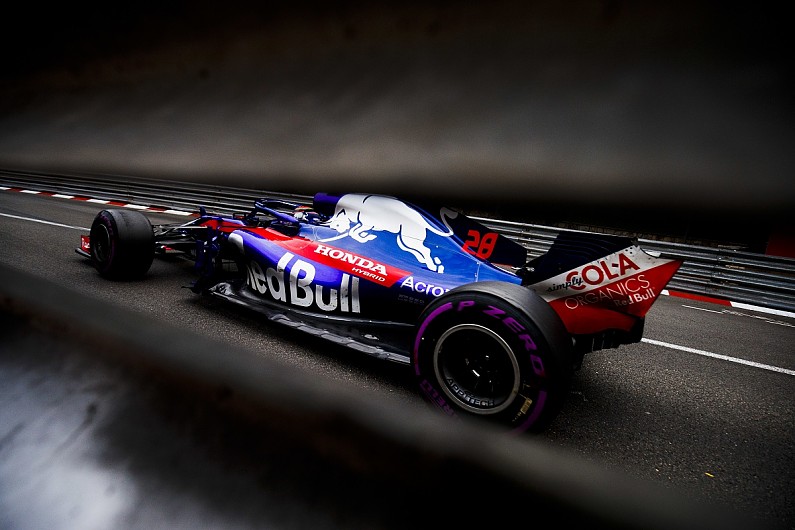 Several drivers struggled with this during the same phase of the race but Hartley felt his problem was exacerbated by front wing damage from the a first-lap bump with Leclerc.

"Initially I did a few very good laps to get the undercut, which worked very well, then I suffered big time with graining," Hartley explained.

"The team told me others were suffering the same, but I think having damage on the front wing wasn't helping."

Hartley picked up a five-second time penalty for speeding in the pitlane, which meant that even when it looked like his group would get ahead of the runners yet to stop he was poised to tumble down the order.

"If we were in their position, considering Brendon's penalty, we probably would have done the same as a team," said Leclerc.

"It's not blaming anything on Toro Rosso, it was just frustrating to be the car behind."

The on-track battle between Hartley and Leclerc ended in a spectacular crash when Leclerc's front left brake disc "exploded" under braking for the Nouvelle chicane.

Sauber had registered a brake problem on Leclerc's car but thought it would survive to the end of the race.