Newly-crowned Formula 1 world champion Lewis Hamilton says clinching his fourth title by finishing ninth in the Mexican Grand Prix was a "horrible way to do it".

The Mercedes driver made contact with championship rival Sebastian Vettel at the start of the race and got a puncture that relegated him to the back of the field.

Unable to make much progress, Hamilton went on to finish a lap down on race winner Max Verstappen and five places behind Vettel.

That was enough to seal his fourth crown, however, as the Ferrari driver needed to finish at least second to have a chance of delaying Hamilton's title.

"It was a horrible way to do it, to be honest," Hamilton said. "But what can I do? I told you I wasn't going to go easy at Turn 1.

"And I don't think I was too aggressive or anything like that, I placed my car in the perfect position.

"I'm looking forward to seeing the replay, but I left a lot of space for the car behind.

"I kept going, I kept going back, and... I really want to say a big thank you to all the guys back at Brixworth and Brackley. Guys, thank you so much for all your hard work.

"Winning the constructors' championship was already a huge feat, and helping me achieve this incredible accomplishment, I'm so grateful."

Hamilton admitted the nature of the circuit made it extra hard for him to try to recover after having dropped to the back. 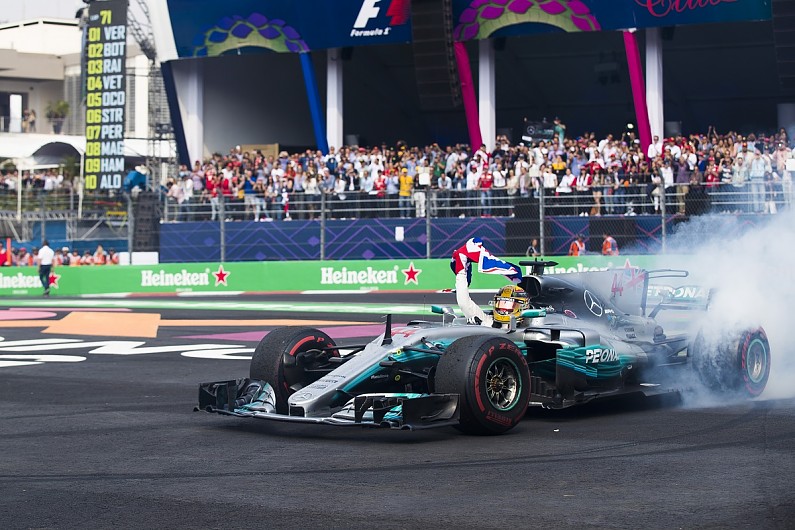 "I had no idea what was going to happen with the championship, to be honest, I was just thinking about getting further up and getting involved in the race," he added.

"And this is such a difficult track, if not the worst track, to follow. So trying to get past people was a disaster.

"But yeah, to be honest the feelings are so mixed right now."

Despite Hamilton clinching the title and team-mate Valtteri Bottas finishing second, team boss Toto Wolff said the race was not enjoyable from the Mercedes garage.

"I hated every bit of that race," Wolff told Sky Sports F1. "It was really bad, and too long, and everything.

"I think we were rattled after the beginning, after the crash.

"Lewis... in the car you don't know what's happening. Is Sebastian still in the race? Can he score points?"

Wolff concedes Mercedes never relaxed during the race, despite Vettel's chances of finishing second looking extremely slim after he too had to pit on the opening lap to replace his front wing.

"After a while we explained the situation to him once it settled, and then we were all focused on trying to make the best out of it," he said.

"It's like you have this massive gap in points and people say 'it's done'. But it's not. It's motor racing.

"Then you have this incident and Sebastian could have won, we could have DNF'd, and then what's next?"