Ricciardo avoided opening-lap mayhem to slot in second behind Lewis Hamilton, but while Red Bull looked considerably faster than Mercedes for most of the weekend, the Australian couldn't mount a victory challenge.

Horner revealed after the race that Red Bull feared Ricciardo would not even finish the race due to a gearbox problem.

"Even before the first [safety car], we could see were losing an awful lot of oil pressure in the gearbox, so we were thinking, 'crikey, this is only going to go to half-distance'," Horner told Sky Sports.

"So Daniel had instructions to start managing that, and he had to sacrifice laptime from doing that.

Discuss the Singapore GP in the Autosport Forum

"He did that incredibly well, and managed to nurse the car home for almost another hour and a half.

"We were so focused on the issue Daniel was managing, it was just a question of getting the car to the finish."

Asked whether Ricciardo could have won if not for the gearbox problem, Horner said: "We certainly could have been closer and put a bit more pressure on. 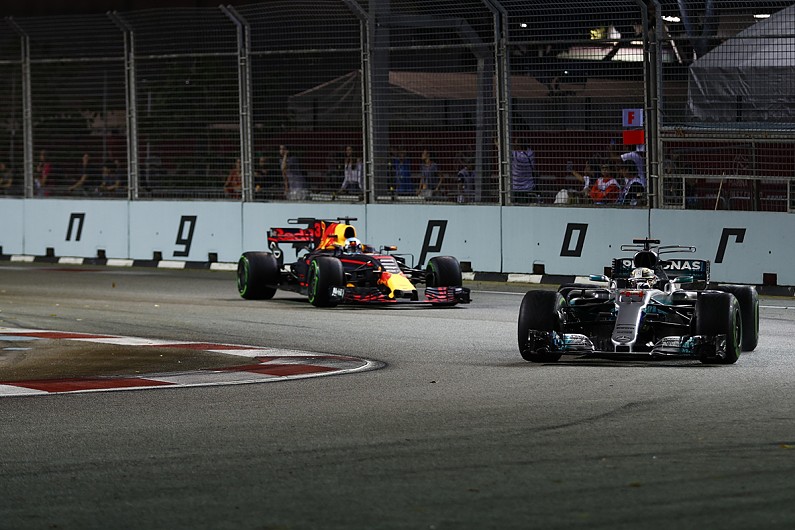 "But it's very different conditions today - with the rain, the rubber being gone, it's cooler than Friday, they were all factors.

"Mercedes, particularly Lewis - we had Valtteri [Bottas] covered - but Lewis had a really strong day."

Ricciardo insisted having to manage the gearbox did not play a major role in the outcome, and he was disappointed that Red Bull's early weekend form did not continue into the race.

"We had a couple of little issues, had to manage the car in certain situations with the gearbox," he said.

"But ultimately it didn't change shape of race. That wasn't reason we were second and not first.

"I have an idea, if we were to do the race again and set the car up different, something we did on the car would have helped us if we went the other way for how the conditions are.

"Three years in a row we are second, normally I am happy with a podium.

"But we didn't have the pace we showed on Friday, we struggled to look after the tyres - when able to punch out a good laptime, I couldn't maintain it, whereas Lewis could answer and answer again."