Qualifying was delayed for more than two and a half hours, after a heavy crash for Romain Grosjean's Haas on the pit straight caused the session to be halted and then suspended as heavy rain deluged the Monza F1 circuit.

The intensity of the rain varied throughout qualifying when it finally resumed, and a break in the rain in the closing minutes of Q3 allowed Verstappen and Red Bull team-mate Daniel Ricciardo to briefly lock out the front row before Hamilton's late show - which helped him surpass Michael Schumacher's record of 68 F1 poles that he equaled last time out in Belgium.

"It's very hard to find the words to explain how I feel - I'm trying to figure it out right this second," said Hamilton.

"I wish I had something really iconic to say. I heard it has only switched hands a couple of times in 50 years, 60 years.

"I am very proud of what has been achieved and it is crazy. I have to keep going and keep extending it."

Though exciting, the battle was rendered meaningless by grid penalties for both Red Bulls for making illegal engine component changes ahead of Friday practice.

Verstappen is set to receive a 20-place penalty and Ricciardo a 25-place penalty, which will promote Williams rookie Lance Stroll to a sensational front row start for Sunday's race.

Stroll lapped inside the top five in Q2 and was fourth fastest in Q3, only three tenths slower than Verstappen.

Force India's Esteban Ocon was fifth fastest, while Hamilton's Mercedes team-mate Valtteri Bottas, who set the pace in Q1, abandoned his final flying lap so wound up only sixth on the final timesheet. 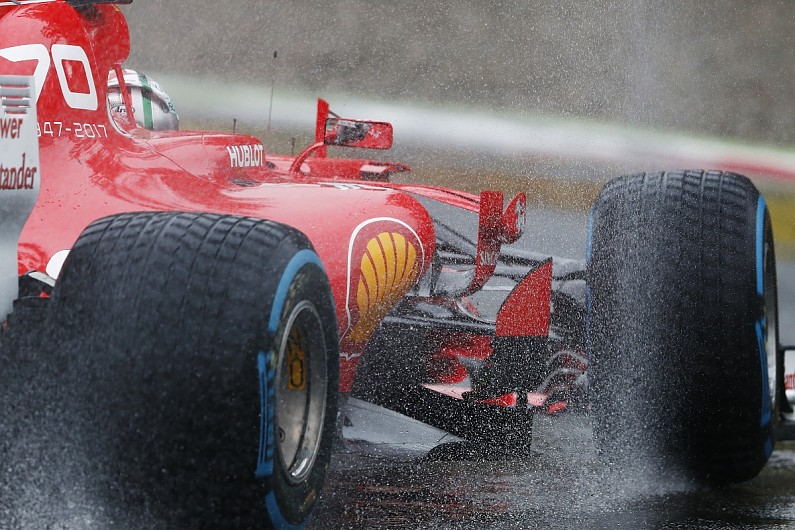 That was one place better than the Ferrari drivers managed, with Kimi Raikkonen seventh and championship leader Sebastian Vettel eighth as they struggled for grip on the Pirelli wet tyres.

The second Williams of Felipe Massa and Stoffel Vandoorne's McLaren-Honda rounded out the top 10.

Sergio Perez looked to have joined Force India team-mate Ocon in making Q3 after a late improvement in Q2, but his lap was 0.002s slower than Ocon's and failed to get the job done after a last-gasp effort from Vandoorne.

Perez should start inside the top 10 anyway, owing to those grid penalties for the Red Bull drivers.

Nico Hulkenberg sat inside the top 10 after the initial Q2 runs, but his Renault struggled for grip on intermediates on his second run and slipped to 12th. He will drop further back thanks to a 10-place grid penalty for changing his MGU-H before final practice.

Fernando Alonso, who faces a 35-place grid penalty of his own, made only one run in Q2, but it was good enough to put his McLaren-Honda 13th, ahead of Toro Rosso pairing Daniil Kvyat and Carlos Sainz Jr, who also faces a 10-place grid penalty.

Kevin Magnussen's Haas, Jolyon Palmer's Renault and the two Saubers were eliminated in Q1, along with Grosjean.

Magnussen made a late improvement on intermediate tyres after the initial runs on full wets, but this was not enough for him to escape the drop zone.

The Haas driver finished up 0.701s adrift of Sainz's Toro Rosso, while Palmer's Renault was bumped to 17th.

Palmer is set to take a 15-place grid penalty for engine component swaps ahead of final practice, so will drop behind Marcus Ericsson and Pascal Wehrlein in the final reckoning.

Ericsson trailed Sauber team-mate Wehrlein by almost a second after the wet-tyre running, but beat him to the 18th quickest time by 0.143s with a late improvement on intermediates.

Grosjean didn't take part in the restarted session after his earlier crash, and will start from the back of the grid due to being outside 107% of the fastest time in Q1.