Hungarian Grand Prix winner Sebastian Vettel has admitted Ferrari Formula 1 team-mate Kimi Raikkonen was "a lot faster" than him as he struggled with steering problems.

Vettel realised on the grid that his car's steering was not right, but he hung on ahead of Raikkonen and the Mercedes to take a win that rebuilt his F1 championship lead over fourth-placed finisher Lewis Hamilton to 14 points.

Though Raikkonen repeatedly told Ferrari over the team radio that he was faster, they maintained position throughout.

"Kimi had good pace and could go a lot faster than me for the majority of the race," Vettel acknowledged.

He said the steering problem had worsened through the grand prix.

"It was a tough one. I was hoping for a bit more of a quiet afternoon," said Vettel.

"I felt already there was something not right when we dropped the car on the grid.

"The steering wheel was not on straight. It didn't feel right and then it got worse.

"I did try to adapt, I knew you could not change it, and then I tried to save the rears.

"We spoke a little bit on the radio about it, talking through the problem.

"They told me to avoid the kerbs but on a track where you use the kerbs, it compromises your performance.

"In the second stint I wanted to make sure I could use the tyres so I was holding back.

"In the end I was pretty well flat out and they were behind me queuing.

"It is good you cannot overtake around his track. I had no room for error." 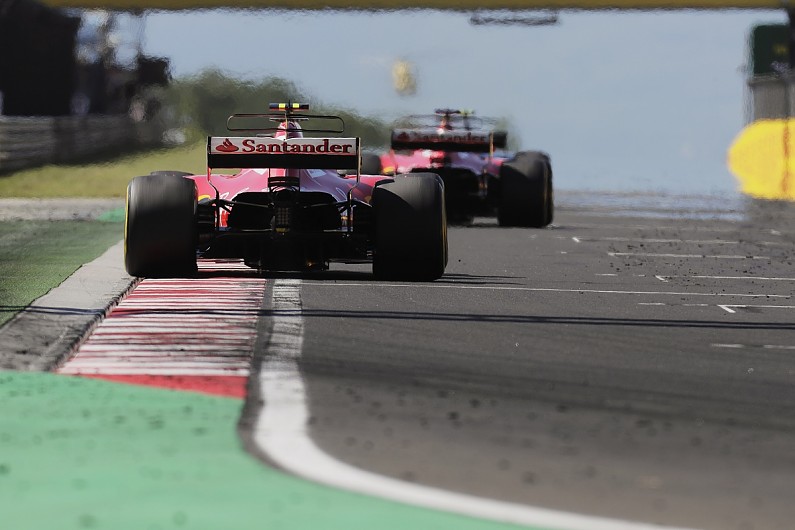 Raikkonen had challenged Vettel at the start but was then stuck behind him for the rest of the race.

"Our starts were pretty similar and I got a tow effect and with a team mate I am not going to force the issue at the first corner," said Raikkonen.

"We're going to fight but fight fair, but since that moment there is not an awful lot you can do.

"We were pretty safe stint on the first stint as we pulled away from Mercedes and then I caught up at the end of the stint.

"I had the whole race following Sebastian and hoping he goes as fast as he can and not saving tyres, as the Mercedes was catching me."

Hamilton closed on the two Ferraris in the closing stages, but Raikkonen said he never felt under real pressure.

"I was not too worried because car was handling well," he said.

"But it wasn't ideal because I felt I had the speed and I was stuck in the middle."