Mercedes fitted a double T-wing to its new Formula 1 car at Barcelona on Tuesday, as it further exploited an opening in the 2017 regulations.

The issue of bodywork behind the engine cover has been a major talking point since the revamped 2017 F1 cars first appeared, with teams experimenting with both shark fins and the high T-wings.

While Mercedes, Williams, Haas and Ferrari have so far run the T-wings, which help condition airflow over the rear of the car, the concept was taken to the next level on Tuesday.

From the start of the second day of testing, Hamilton's W08 was fitted with a double-decked T-wing in front of the rear wing.

The potential for a dramatic escalation of bodywork in this area, and the fact they appear to be flexing so much at high speed, could prompt the FIA to consider outlawing the devices if it feels there are potential safety implications. 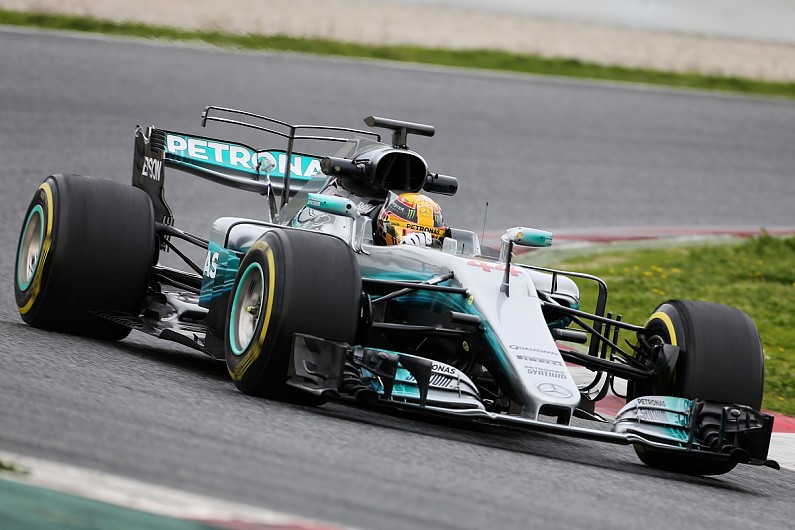 There has already been debate about the shark fins, which teams have fitted this year because the rules did not outlaw them as in recent years.

"The regulations left a little bit of scope open in the middle of the car, and I'm not sure if that was intended," Toro Rosso technical director James Key said.

"But as a result it's not surprising that they've come back. They're very visible, but their impact is not massive.

"They're just ahead of the rear wing - it helps a bit in that area. They do exactly same job as they did in 2008."

When asked if he felt the issue might prompt a regulation change, Key said: "We'll have to see.

"That's more an FIA/Strategy Group kind of discussion potentially, for developing the regs to the next step.

"As long as that possibility is open it's likely that you'll want to put something there."