Lewis Hamilton set the pace in opening practice for the Korean Grand Prix as Kimi Raikkonen suffered a big crash at the end of the session.

Mercedes driver Hamilton posted a lap of 1m39.630s to beat championship leader Sebastian Vettel by 0.037s, although the Red Bull driver had all the fastest sectors of the session.

Team-mate Mark Webber was third quickest and the only other man to lap in the 1m39s.

Nico Rosberg in the Mercedes was fourth ahead of McLaren's Jenson Button and Ferrari driver Fernando Alonso. Romain Grosjean was seventh ahead of Raikkonen, who ended the session with a heavy crash.

As the session was coming to a close, Raikkonen lost control of his Lotus and crashed heavily at the final corner, causing substantial damage to his car.

The Finn was able to walk away from the crash, but the team faces a race against the time to have the car ready for second practice.

Although perfect weather conditions welcomed the drivers at the start of the session, it took over 15 minutes before the first lap time was set by Rodolfo Gonzalez.

The Marussia driver had the track basically to himself for the first half hour, but that did not stop him from enduring drama, the Venezuelan losing control of his car and crashing against the barriers at Turn 13.

He lost his front wing and returned to the pits, leaving the circuit empty for several more minutes.

McLaren's Sergio Perez and Button joined Gonzalez in the timesheets with over 35 minutes of the session gone as the action finally began to pick up. Perez was the pacesetter for several minutes as most of the frontrunners continues to wait in their garages for the track conditions to improve.

Mercedes' Rosberg relegated Perez to second at the 50-minute mark, the German posting a 1m41.498s that was soon bettered by less than a tenth by Alonso.

Rosberg fought back seconds later to regain the top spot, the Mercedes driver followed by Vettel and Raikkonen, all of them lapping in the 1m40s. 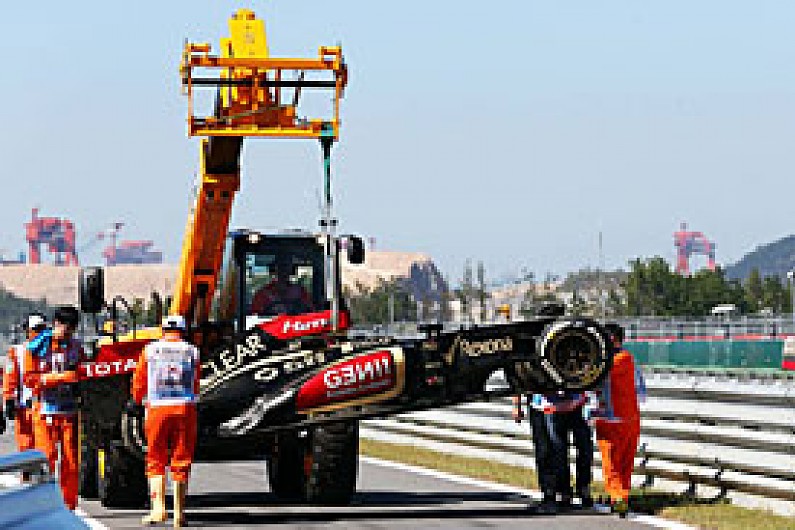 Hamilton became the first man to lap in the 1m39s with half an hour left, the Briton outpacing his team-mate by nearly half a second as Webber jumped up to second behind the Briton.

Hamilton's time would remain unbeaten until the end, although Vettel moved up to second with a minute of the session left.

Apart from Gonzalez's and Raikkonen's crashes, the session included spins from James Calado and Hamilton, as well as several offs without further consequences.

Felipe Massa's session was curtailed by a puncture that meant the Brazilian spent most of the 90 minutes in the pits, the Ferrari driver completing his first timed lap with just 12 minutes to go.