Paul di Resta put Force India on top of times in the opening practice session for the Canadian Grand Prix on Friday.

The Briton emerged fastest with a time of 1m21.020s after he benefited from a late yellow flag, as all drivers tried to set a time in the dry following a mostly wet session.

The session started on a very wet track following overnight rain and it was not until the 15-minute mark that a driver completed a timed lap, with Sauber's Esteban Gutierrez the first man to cross the start/finish line using Pirelli's intermediate tyres.

Webber moved to the top of times 25 minutes in after completing his first lap of the track, 1m29.412s. He went 1.5 seconds quicker to post a 1m27.99s on the following run, when he had the track to himself.

Thirty-three minutes into the session, Raikkonen relegated Webber to second with a lap of 1m27.334s as the action on track intensified, although the circuit remained too wet for slicks. The times continued to tumble over the following minutes, with Toro Rosso's Jean-Eric Vergne lapping in the 1m26s to jump to first place.

The Frenchman was soon outpaced by Monaco GP winner Rosberg, who stopped the clock at 1m26.051s using Pirelli's intermediate tyres. The Mercedes driver shed over a second off his time during the same run to be the first driver to lap in the 1m24s as a dryer line began to emerge around the halfway point.

Following an off-track excursion, Rosberg's team-mate Lewis Hamilton moved to second place with 40 minutes left on the clock, the Briton just 0.152s behind the German.

With less than 30 minutes to go in the session, Rosberg went over a second faster and managed a 1m23.690s, still using intermediates. Vettel then also lapped in the 1m23s to place himself in second, some three tenths behind the Mercedes.

The world champion stayed on track, however, and went quickest with a lap of 1m23.047s on the sixth lap of his run on intermediates.

Vergne was the first man to put on slick tyres with 22 minutes left, the Toro Rosso driver also the first driver to try the prototype Pirelli rubber brought for testing in Canada. He did not complete timed lap, however, and returned to the pits straight away.

Alonso left the pits in the slick-shod Ferrari with 15 minutes to go, the Spaniard also getting the first taste of the modified tyres. He also returned to the pits after just one lap without setting a time, the track conditions still seemingly too tricky for the rubber to work properly. 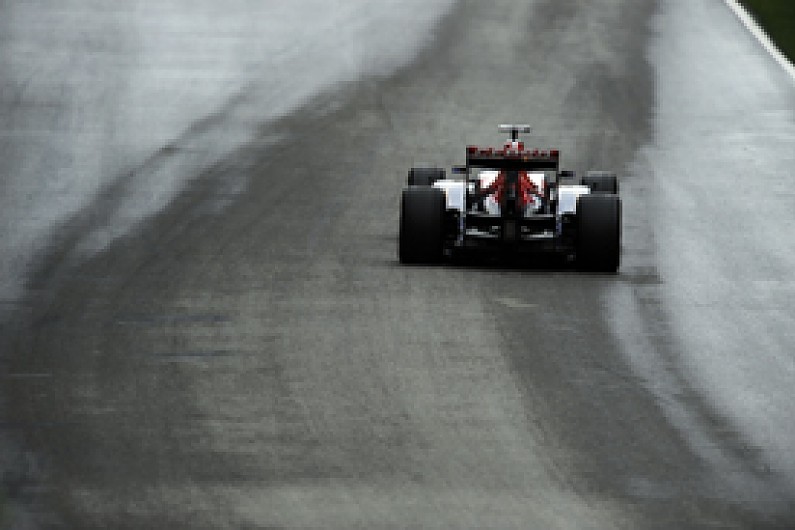 As the session entered the final 10 minutes, most drivers decided to go out on slicks as conditions continued to get better. Button, using the medium tyres, lapped in the 1m21s to jump to first position with five minutes left. Raikkonen then moved to second in the Lotus.

The session was interrupted by a yellow flag a minute later, however, as Pastor Maldonado crashed his Williams at Turn 4, damaging the car but walking away unscathed.

Despite the yellow flag, di Resta jumped to first place with a 1m21.020s before the chequered flag was out.