Ferrari chief designer Nikolas Tombazis has admitted that the changeover from using Toyota's Cologne windtunnel to its refitted one at Maranello will compromise work on its 2014 challenger.

After correlation problems last year, Ferrari decided to shut down its Maranello windtunnel to upgrade it, a process which is not set to be completed until around October this year.

Aerodynamic work on the 2014 car is currently ongoing in the Toyota tunnel, but will return to Italy once the Maranello upgrade is completed.

When asked by AUTOSPORT if the switch will compromise work on the 2014 car, Tombazis said: "Any change of windtunnel has got some associated risks, so yes you are right.

"Ideally, we would already have that completed and we would be working at home with an upgraded windtunnel in which we have complete confidence.

"It is not an ideal solution but, on balance, the decision we took to carry out that process was something that, if we had delayed, would just postpone the problem until later.

"So we thought it was paramount to do it as soon as possible.

"The sooner [it was done] the better and we decided to do it notwithstanding the fact that there is the 2013/2014 pressure." 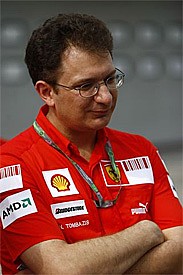 Tombazis added that the upgrade to the windtunnel is essential given that Ferrari has fallen behind its leading rivals in that area in recent years.

"We have made no secret of the fact that we are doing a fairly important upgrade," said Tombazis.

"That's obviously putting a lot of stuff on our plate but we feel that it is something that we cannot delay.

"Therefore, we have this added pressure that we have to keep on top of that and we have to use an external windtunnel while we carry out this major upgrade

"It's important because our windtunnel technology has been below the high standard of some of our competitors and this work is going to bring us to that level."