Renault believes a calibration problem with fuelling equipment is the most likely explanation as to why Sebastian Vettel did not have enough petrol in his car for qualifying for the Abu Dhabi Grand Prix.

Vettel was stripped of his third place grid slot and thrown to the back of the grid at the Yas Marina circuit after post-qualifying checks discovered he only had 850ml of fuel on board his car after Q3 - whereas the rules demand a minimum of one-litre be present for a sample.

At the time, both Red Bull and Renault were convinced that enough fuel had gone into the car for his final run, so neither could offer a clear answer in Abu Dhabi about why there was not sufficient present for the FIA tests.

Post-event investigations conducted by both Red Bull and Renault have concluded that there was no mechanical problem with the car's engine or fuel system, or that Vettel had consumed more fuel than expected during his laps.

Instead, Renault suspects that the fuelling equipment, referred to within the team as the 'robot', used on Vettel's car was at fault.

Renault's head of trackside operations Remi Taffin said that he was awaiting a final report from Red Bull, but the likelihood is the fuelling equipment under-delivered on what it claimed had been put in the car.

"We now have gone very deep into the investigation and, if we look back at what we learned from Saturday qualifying to Sunday morning, we obviously eventually discovered that we were missing a bit of fuel in the cell," Taffin told AUTOSPORT.

"We have checked the numbers, we have checked what we have done with the fuel 'robot' and every single number says we should have had the fuel.

"So Red Bull are now checking with the supplier of their 'robot' to check out that we had the right delivery. This is in progress."

Taffin said that there had been no change to Red Bull or Renault's normal fuel strategy for Abu Dhabi qualifying compared to previous grands prix, and analysis of its data showed that consumption had been as normal.

"We have checked everything on our side and could not notice any problems, so we are now waiting on whether that fuel went in or not," he said. 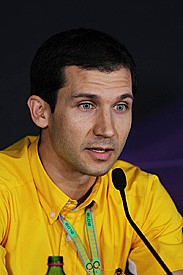 Taffin revealed that the first warning the team had that there was not enough fuel was when the data on Vettel's in-lap showed a lack of fuel in the collector.

With Renault convinced at the time there was enough petrol in the tank, Taffin said it suspected a fuel system failure - which is why it ordered Red Bull to stop the car because it did not want to risk damaging the engine.

"We were sure at that point that we had the required level, so we did not understand why we had this drop in collector level," he said.

"At the time we had a brief discussion on our intercom where we said we have this problem, it is bizarre, it is weird, and it should not be this way.

"We thought that there was a problem in the fuel system somewhere and, as we later explained to the stewards, we could not afford to have a fuel pump that is running dry - because it could seize and cause the engine to be broken.

"That is why, when we discussed it with the [Red Bull] engineers, we gave the call to stop the car."

Renault expects an answer from Red Bull about the fuel 'robot' issue before the weekend, and says there will be little problem ensuring there is no repeat problem in the future.

When asked if they would change procedures for the final two races, Taffin said: "I think first we have to wait for the answer.

"If there was nothing we can find as an explanation we will be surprised, but we will review things with Red Bull and try and find the best solution between us. It will be a common decision. We will not do something on our own."