Perhaps it's inappropriate to think too deeply about the satisfaction to be had from ushering a cool, lubricated, light-alloy piston into the tight concentric embrace of a V8 engine block. But believe me, it is very real.

And it helps explain the calm, satisfied deliberation of Renault F1 engine-build trainees Francois Giardino and Florian Hubert as they set about reassembling the RS26 2.4-litre V8 that powered Fernando Alonso to pole and victory at Monaco and Silverstone in 2006.

Their state of being is Zen-like, their movements precise, and all sense of time evaporates before the relentless sequence of events that must be observed to make whole an assemblage of more than 5000 individual parts - 1500 of them moving parts.

Sprockets, pumps, pistons, rings, cams, belts, valves, bolts... all must be precisely integrated to create the mighty 'lump' recognisable as an F1 engine.

Francois, 22, and Florian, 21, are quiet types - serious engineering interns learning their trade at Renault Sport's fabled Viry-Chatillon plant, 12 miles south of Paris, which, since 1974, has been turning out race engines.

And since 1977 these have been F1 motors: from the original, combustible V6 turbo that lit the fuse on a decade of development during which power levels exploded to beyond 1200bhp from 1500cc, through to the 2012 2.4-litre normally aspirated V8 that powers Red Bull, Lotus, Williams and Caterham.

That's three-and-a-half decades of (not quite seamless) success, making Renault F1's third most winning engine builder, on 147 victories and counting. Ford is next up on 176, but as it's unlikely to touch F1 any time this side of Armageddon since its last, disastrous, adventure with Jaguar, there's every chance Renault could take the coveted P2, behind Ferrari (on 220) by 2015.

It's a Renault RS27-2012 that had shoved Messrs Webber and Vettel along to a late-season 2012 constructors' championship lead (297 points to McLaren's 261) post-Singapore. So Viry-Chatillon isn't a bad place to come to learn what it takes to construct a motor that can pump out 750bhp over a two- to three-race life cycle.

Ever-tighter regulations mean the engine we'll help build is very similar to those on the 2012 grid. So, revs are maxed at 18,000, weight must be a minimum of 95kg, and the V-angle is fixed at 90 degrees.

Materials, while premium, stop short of exotic and will not be unfamiliar to any devotee of tasty road cars or even top-end road bikes. Think aluminium alloy for pistons and block; a nitrided alloy steel crank with tungsten alloy counterweights and con-rods of titanium alloy. The costly early-noughties days of aluminium-beryllium have long been banished to the history books.

Olivier Loret, head of V8 engine build and development at Renault Sport, is today both our guide and mentor to the two young 'uns. He explains that much of the engine we'll be allowed to tinker with has already been assembled, leaving maybe a hundred or so components to be caressed, eased, then bolted into place.

A full from-scratch build is a week's work for two experienced builders - or moteuristes as they're delightfully known here.

Loret, blessed with the pipe-cleaner physique of a pro cyclist and the dexterous fingers of a concert pianist, is about to demonstrate why F1 engine building is so labour-intensive.

He lifts a piston delicately in his right hand, using a thumb to secure the twin rings that encircle its diameter, and his four fingers to squeeze them inward against the natural outward springiness that will ensure the perfect seal with cylinder walls.

Compressing these rings while lowering the piston - con-rod first - into its cylinder sleeve (used to guide the piston towards its bore hole) is tricky and it takes even the skilled digits of Loret several moments to align, compress, insert, lower, then firmly push cylinder into block.

There's a whispering 'sccchhhllluuurrrrp' as one perfectly machined component meets another. "Now you try," he says, smiling thinly.

The piston is lighter even than you might imagine for something that has to withstand explosive internal combustion forces that accelerate it at the equivalent of 0-60mph in half a millisecond or, to use an alternative measure, at 8000g.

Its upper surface is machined to create a face that aligns with the angled-in valves. The larger twin inlet valves, incidentally, are towards the centre of the 'V'; the two smaller exhaust valves towards the outside.

It feels like an expensive component, an object whose form is the product of many decades of accumulated knowledge and development, trial and error. Is it any surprise, then, to learn that my first attempt at inserting piston into block is a woeful failure?

Almost at the first touch, I lose thumb pressure on the rings and they spring outwards. When I try to recompress them into their sidewall grooves, I clumsily cross them, causing Olivier to grimace as if he'd stubbed a toe.

He takes back the piston and scrutinises the rings, indicating a crack of perhaps half a millimetre that has resulted from my inexpertise - minute damage that would nonetheless cause total engine failure. He prepares the piston again, but in the transfer from his hand to mine, rings slip from oiled fingers and we're back to square one.

This procedure is repeated until, finally, I get a grip. Oh-so-gently, hardly breathing such is the tension of performing this intricate task under watchful, expert eyes, I manage to slide in the piston, this time without ring-slippage.

It's an almost indescribably satisfying sensation to succeed with the initial movement, then push firmly down to ensure the piston is happily seated, before reaching under the block to tug on the con-rod that will mate piston to crankshaft.

No wonder F1 engine builders tend to stick around once they've learned their craft. Many at Viry have notched up 20-30 years' service.

Once such is Dominique Bachard, who has been here since 1984. He lived through the giddy thrill of the first F1 turbo era and smiles at the prospect of their 2014 return, while also lamenting the passing years.

"They come and go like fashion," he says, "and it makes me a little sad because I was young when we first had F1 turbos and now I am not."

At least he's allowed to keep one of the 1981 RE30 cars he helped build, in his garage at home, to remind him of the good old days.

He shows us scratchy Polaroids of the hefty yellow-white-black machine, once raced by Alain Prost and Rene Arnoux but now looking ridiculous on skinny wheels and tyres straight from a Renault 4 that serve only to keep its belly off the ground.

Development of the all-new hybrid V6 turbo engines for 2014 is well under way here, only five metres from where we're standing. Sadly, our camera lenses aren't permitted to point in their direction.

During a pause in assembly of 'our' engine, Axel Plasse, head of design and simulation and an 18-year factory veteran, pulls us to one side for a brief tour of Viry's upstairs brains trust: the first floor where beautiful power-plant dreams are dreamed, even as their assembly continues beneath the boffins' feet.

Illuminating the intricacies of F1 engine design, Plasse explains how vital lubrication and oil scavenging are to efficiency and reliability. There are, he tells us, 10 pumps on an F1 V8, each dedicated to maintaining a thin film of clean lubricant between all the wildly revolving inner parts.

Speaking with passion, he notes: "The lubricant extracts heat and reduces contamination and wear. It is the life fluid of the engine."

He continues to enthuse over the simulation department, particularly its work predicting harmonic frequencies and resonance that will occur at particular engine speeds.

"Resonance can be damaging and if, for example, it causes a crack, our first reaction is not to make a part stronger by adding material and making it heavier.

"We must find the precise resonance at which the failure occurred then maybe make the part lighter. The lighter the part, the higher the frequency [ie engine speed] at which resonance occurs.

"It may be that by lightening the part, the resonance will become so high that it's taken out of the engine's rev range and becomes irrelevant."

Back on the factory floor, work has relentlessly and methodically progressed in our absence. The cylinder head is in place and awaits the fitment of its aluminium engine cover.

A brief pause in assembly is caused by the need to heat said cover with a hairdryer, to make the metal expand by the micron or two necessary to allow it to slip on without scuffing.

Yep, even in this most high-tech environment of machined perfection and obsessive precision, a humble hairdryer has a vital role.

Next I'm handed a bespoke three-in-one water-pump-oil-pump-alternator assembly (weighing less than 1kg), to attach to the cylinder block. It's an exquisite object, form dictated solely by function, whose innards rotate with an absence of slack and a frictionless ease.

Attaching it should be a simple process of holding the part in place, then tightening four hex bolts. But I stumble by selecting a 3mm FACOM T-head hex key, instead of the correct 5mm version.

My Viry chaperones enjoy my bafflement as I turn the tool without effect, before ending my misery by handing me the 5mm key. I then succeed in rounding two of the bolt heads simply by not pushing the Allen key firmly enough into the bolt before tightening. Olivier, Florian and Francois look on in disbelief - or maybe despair.

Replacement bolts are found and expert hands swiftly remove evidence of my visitation on this beautiful, finally complete, mechanical object.

It's strange to see it becalmed and plinth-mounted without a carbon monocoque bolted to it, or rear suspension hanging off the back. Yet deep within its metallic guts lies the soul of a motor that once howled at 19,000rpm, lifted hairs on necks and helped one F Alonso to a second world title. 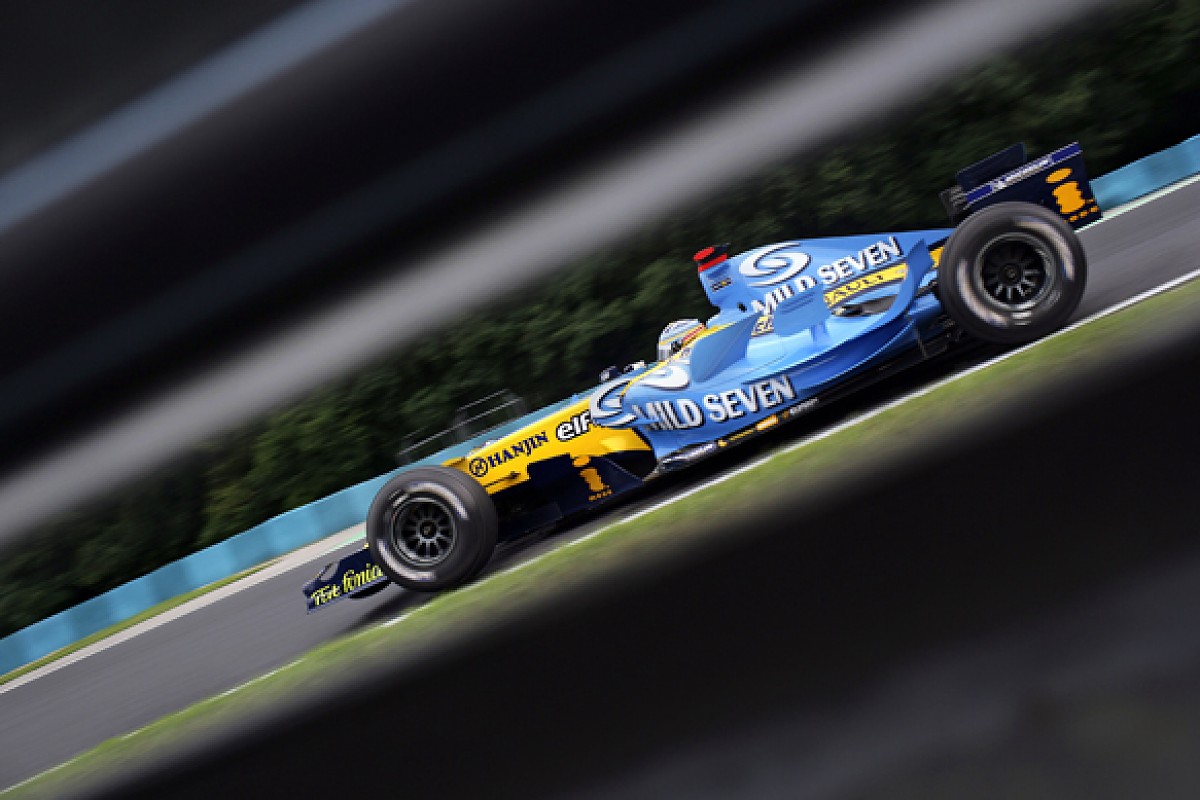