As the last of the top three teams to launch its car, there was huge expectation of what Red Bull Racing would unveil for 2012.

Since 2006, design direction at Red Bull has been led by chief technical officer Adrian Newey, and his time there can be split between the first cars and the hugely successful post-2008 machines. In 2009, after a watershed in aerodynamic rule changes, Newey's RB5 set the design standard and his cars have done so ever since.

With further rules changes for 2012 designed to kill off his high-nosed cars with exhaust blown diffusers, the expectation for Newey to innovate has been high. While the web launch disappointed with a lack of clear images, what was apparent is that the RB8 is a clear evolution of the line of Newey cars since 2009. However, there were two details we were teased with: the nose hole and the exhaust position.

As the car finally took to the track and the assembled media could observe its details, it became nclear the nose and exhaust are key differences this year.

In general layout, the RB8 could be seen as disappointing: the wings, sidepods, top body and rollhoop are all largely the same as the dominant RB7. Clearly for legality, the nose has been modified to meet the new maximum height regulations and the exhausts repositioned to be above the floor. But with such a dominant car and a chasing pack of rivals, there was perhaps a lack of desire to start afresh and create an all-new design.

Many had expected a more dramatic or innovative design, but I suspect the rear-end will include some changes to the exhaust and bodywork before the first race.

It's the nose design that has caught the most attention. Clearly visible between the bulges on the nose is a wide slot. For 2012, new rules limit the maximum height of the nose to 55cm and the chassis behind it to 62.5cm, the resulting change in bodywork height has to be accommodated in just 12cm of nose.

Red Bull wanted the highest possible nose to create the most space for aerodynamic parts below it, in order to feed the underfloor with the ideal airflow to create more downforce. This meant that the nose and chassis now have a flat top to them and getting the air to flow smoothly over these surfaces and accommodate the 7.5cm step has forced some innovation from the Milton Keynes based team. 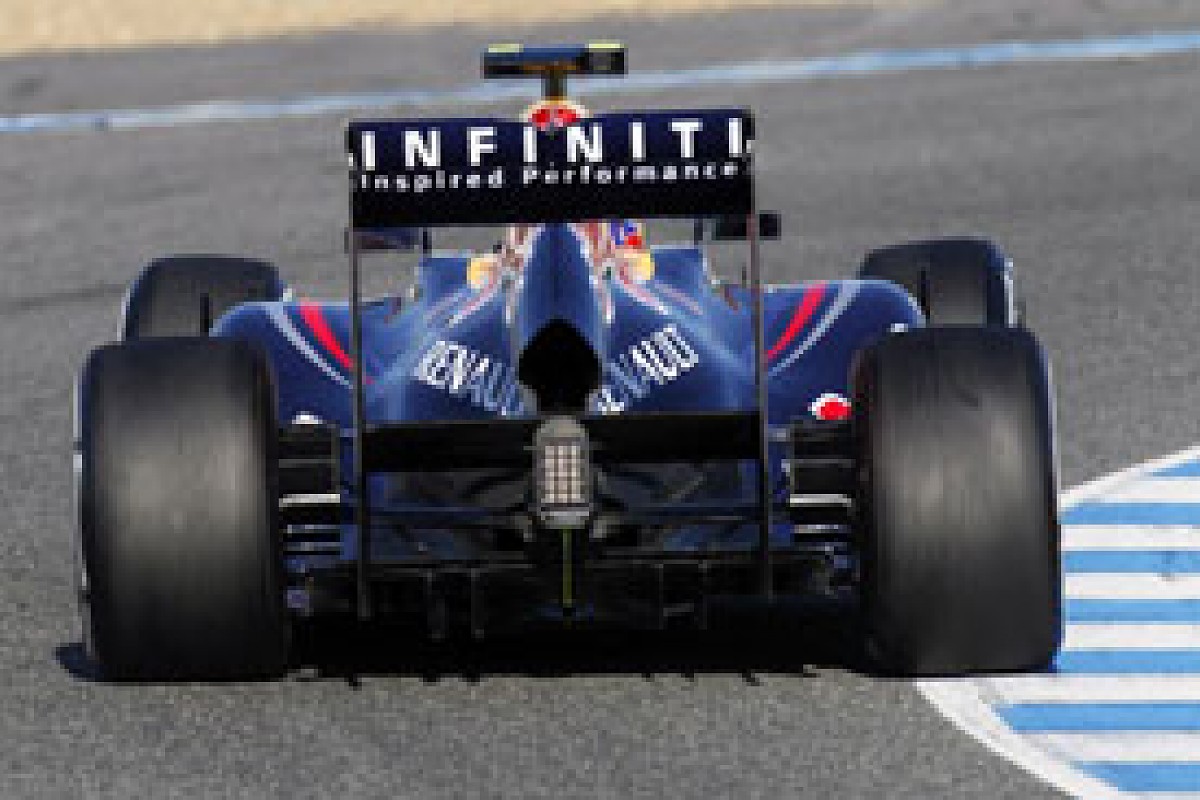 Rather than lose aero potential with a lower nose or suffer airflow separation over the step, Newey has created a slot and rounded section to the step in between these two sections. The usual driver cooling inlet has been moved from the tip of the nose to a wide slot in the step region. Air flows up the nose, some enters the slot and the rest spills over the rounded upper lip. This creates a tumbling aerodynamic effect, that keeps the airflow attached to the flat surface behind the nose. Despite speculation, Newey confirmed the air flowing into the slot simply enters the cockpit to cool the driver.

Although a highly visible development, this is a small performance gain and largely a workaround to the new nose rules. Other teams may chose to follow this innovation, while Sauber already has a different solution to the same issue.

Beneath the nose is a front wing that appears to be very much the end-of-season wing from 2011. This year the regulations on flexible wings have been altered, with a new test that demands half the deflection for the same load. This is seen by the FIA as the next move in preventing teams bending their wings for aerodynamic benefit at high speed.

Red Bull has still followed the tiny sidepod philosophy. Externally similar to the RB7's sidepods, with rounded inlets creating a curved undercut, then the flanks sweep tightly inwards. By the point where the sidepods pass the engine, the width is negligible and the entire sidepod merges into the gearbox fairing at the rear of the coke-bottle shape.

Unlike last year, the exhausts now point upwards, exiting the sidepod just aft of the engine and beneath the top rear wishbone.

These exhausts direct their plumes along the top of the gearbox and rear impact structure, most likely to blow under the beam wing, which is extended in its centre to catch the fast-moving exhaust gasses. This probably has an associated effect with the flow coming out from the diffuser.

This set up may well be beneficial in terms of creating downforce, but is probably not as throttle sensitive as a more direct blowing of other bodywork, perhaps beneficial due to the rules on off-throttle engine mappings having been tightened up this year.

One side-effect of the exhaust position rules is the attitude Red Bull can set the car at. Over recent years Red Bull have the set the car with a steep amount of rake. This is the nose down/tail up attitude, which places the front wing lower to the ground and creates more space under the floor, both for aerodynamic benefit.

Last year, Red Bull ran as much as 10cm of rear ride height, a huge amount by racecar standards. The problem with a lot of rake is sealing the diffuser, so Red Bull used the exhaust plume as a virtual skirt to seal the low pressure created under the floor. Now this exhaust solution is banned, Newey has admitted the car will have to be run at a shallower rake angle.

The RB8 carries over its Renault engine supply, with Red Bull now being the primary Renault-supplied team. Along with the engine, the French manufacturer also provides its KERS, developed in conjunction with Magneti Marelli. As with last year, Red Bull developed its own battery package, which positions the cells in three batteries, one either side of the gearbox, and one within the gearbox. The gearbox itself remains a seven-speed, carbonfibre-cased unit, with the pullrod suspension now in its fourth incarnation at Red Bull.

The car we've seen so far is just the first incarnation of the design, to get the car running on track. The car was so new that the first laps were delayed by the late arrival of parts from the factory, but 54 laps were still completed on day one at Jerez, showing the car is reliable out of the box