Twenty years ago Tom Walkinshaw ran one of the most spectacular one-make championships to grace the world of motorsport, and which came to a dramatic conclusion on the weekend of the Belgian Grand Prix.

To commemorate the Jaguar Intercontinental Challenge - a series that even exceeded the BMW M1 Procar Series of a decade earlier for its star count, but that ultimately ended as an expensive failure - Adam Cooper looks back on that fantastic year of competition with fresh new insight from those that built and raced the XJR-15 monsters.

It doesn't end there either as Kevin Turner gets under the skin of the car with one of its drivers, Ian Flux, and examines what made it so iconic.

Belgian GP report - Would Red Bull dominate the second half of the year in the same way it did the first? Would Ferrari's recent upturn in form carry through to Belgium? Would McLaren, winner of the past two races, keep up the momentum? And could Mercedes spring a surprise?

All these questions, and plenty more, are answered in our 14-page report featuring a qualifying appraisal, the 44-lap race in detail, the technical tweaks to cars, and a comprehensive set of results and statistics.

In addition, our news team gets the inside story of the Red Bull/Pirelli spat over tyre wear and camber angles and reveals that the world championship-leading team strongly considered starting the race from the pitlane, so concerned was it over the safety of drivers Sebastian Vettel and Mark Webber.

Mark Hughes column - 1964 F1 world champion John Surtees reminisces about his beloved Spa - the scene of his final Ferrari win in 1966, while our grand prix editor compares Surtees' approach with that of the modern-day gladiator.

GP2 Spa - Romain Grosjean became the seventh GP2 Series champion with a third-placed finish in the wet opening race for DAMS. Up ahead of him Christian Vietoris finally registered his first win of the year while veteran Luca Filippi won the sprint event the following day. Glenn Freeman saw it all. 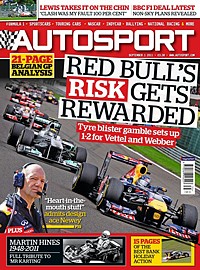 F2 Spielberg - Young Spaniard Ramon Pineiro is making a name for himself in F2. Andrew van de Burgt was in Austria to see him take a double and make it three in a row.

IndyCar Sears Point - Roger Penske's squad took a dream 1-2-3 on the California road course, with Will Power leading home his team-mates Helio Castroneves and Ryan Briscoe. Mark Glendenning was there.

Mercedes' British stars interviewed - Gary Paffett and Jamie Green may have missed the boat in F1 but, as Jamie O'Leary explains, they're prized assets in the Mercedes factory DTM line-up.

From the archive - Fifty years ago this month, Stirling Moss won the Oulton Park Gold Cup in the unique Ferguson P99.