You might expect things to be slowing down on the technical front as teams begin to think about their 2011 campaigns, but as the unprecedented title war continues between Red Bull, McLaren and Ferrari so the pace of development remains high.

Despite the unpredictable nature of the Korean Grand Prix track's freshly-laid asphalt surface, and the fact that Formula 1 was the first major category to visit Yeongam, all three teams brought new parts to round 17 of the world championship.

McLaren was the first team to use the F-duct. Inititally what it did was feed the air flow into a slot in the rear flap, which then stalled the air and reduced the drag of the rear wing at a point in time when the driver chose to operate it. Whenever you operated it you would get a reduction in drag and, in-turn, an increase in straight-line speed. But now the team has moved the F-duct to the main-plane of the rear wing, which stalls a bigger part of the wing, thus creating a potentially bigger straight-line speed advantage.

But obviously whenever you reduce the drag of the wing you reduce the downforce as well and I think we saw that in Korea. The conditions were so slippery that drivers couldn't use the F-duct to its maximum potential because you needed the grip - even going down the straight. The more of a wing stall you had, the more difficult it became, so the F-duct became difficult to use.

The development McLaren has done is similar to the direction that Renault went in. We've seen a fairly decent switch in Renault performance since Spa, when its straight-line speed suddenly became comparable with its rivals, and McLaren has gone down the same route.

Ferrari went to a three-piece front wing some races ago, then reverted to a two-piece for one race - I'm talking about the main section of the wing - then switched back again. That's because the wind-tunnel showed the two-piece to give more downforce, but what the team found is that it's more critical and creates a bigger percentage air flow separation. The three-piece is more consistent, which is what allows you to develop the diffuser.

What Ferrari has done is change the diffuser's priorities a little bit to make the double diffuser part work a bit harder and reduce the effect the lower section has. So the car is less sensitive to ride-height change and will produce a more downforce under braking. So it's about changing the aerodynamic characteristics of the car to solve the problems it has been giving the drivers.

It all stems from getting a better air flow from the front of the car which allows you to optimise these bits. Every time you look at what to develop next, you start at the front wing and then you head down the car again, and that's what Ferrari has been doing.

At this stage of the season it's interesting to see how the development is still so full-on with things like the double-diffuser - which have been outlawed for next year. I can understand why you would be aggressive on front wing development because that is staying for 2011, but you would have thought that developments on diffusers and F-ducts would have petered out as they are outlawed for next season. But the teams can see that title at the end of the season and they want to try and achieve it.

The team brought a new front wing to Monza and has played around with it ever since. It seems to be in a situation where it's not sure whether the wing is doing any good or not. The team keeps using flow-vis to see where the air flow of the trailing edge of the wing is going and continual back-to-back testing on Fridays shows a lack of confidence in this development direction. In the last few races McLaren doesn't seem to have progressed. Ferrari, on the other hand, has moved forward and closed the gap to Red Bull.

For Korea, McLaren added a little Gurney flap on the trailing edge of the wing endplate. As you can see in the picture, the holes in the front wing endplate have a nice leading edge on them, making the wing flaps more three-dimensional. They come along horizontally and then they curve down on to the base of the endplate. Where they join, the curved part is very susceptible to air flow separation, so by having the slot gap there it works like a vertical wing. The endplate itself is quite curved to turn the air flow out around the outside of the front tyre.

You want to make the wing work as three-dimensionally as possible, especially the area around the front of the tyre because the tyre creates a big blockage - so you need to expand the air dramatically. When you do that you can get troublesome air flow separation in this area. You also get an air flow change whenever you turn the steering wheel because obviously front wheels are variables depending on steering lock. That changes how the flow on the endplate works.

To get aerodynamics to work well you need it to be as consistent as possible. So this Gurney flap behaves in the same way as one on a wing, it acts as a little trip and helps the air flow to stay attached to the inside surface of the endplate for longer and more consistently.

McLaren is trying to optimise the front wing, but without knowing whether it is better or not. When you go to a track like Korea, where the surface conditions changed so much, you really don't have any hope of developing your car. You just have to believe in what you have got and go with the track.

Serving up a tea tray

The tea tray area is necessary because the regulations require it to be there to legalise the chassis which sits above it. Everybody uses this area to hold ballast.

It's aerodynamic characteristics are there to try and make the bargeboards work on the air flow underneath the chassis, increase the velocity of this flow and help scavenge the flow coming off the trailing edge of the front wing so it can work more efficiently on generating downforce. The tea tray also introduces that flow to the leading edge of the under-floor at a higher velocity than it would do if the bargeboards weren't manipulating it. That in turn allows the diffuser to work on that faster air flow and produce more under-floor downforce.

What's new about this tea tray is that it has raised sides on it to prevent the flow from spilling underneath the tea tray itself, because that's where it would want to go - to the low pressure area underneath the floor. If you let flow do that then the car becomes a lot more pitch sensitive, because it is far forward on the car and one of the lowest points to the ground. You want the air flow to stay on top of it and allow the bargeboards to increase its velocity as it enters the sidepod leading edge.

It's different but it is the same. It's got a flat floor area and a raised side, the same as the McLaren. It's just executed in a different way. It has a raised centre section, which is probably because the team is putting ballast in there to optimise the weight distribution. 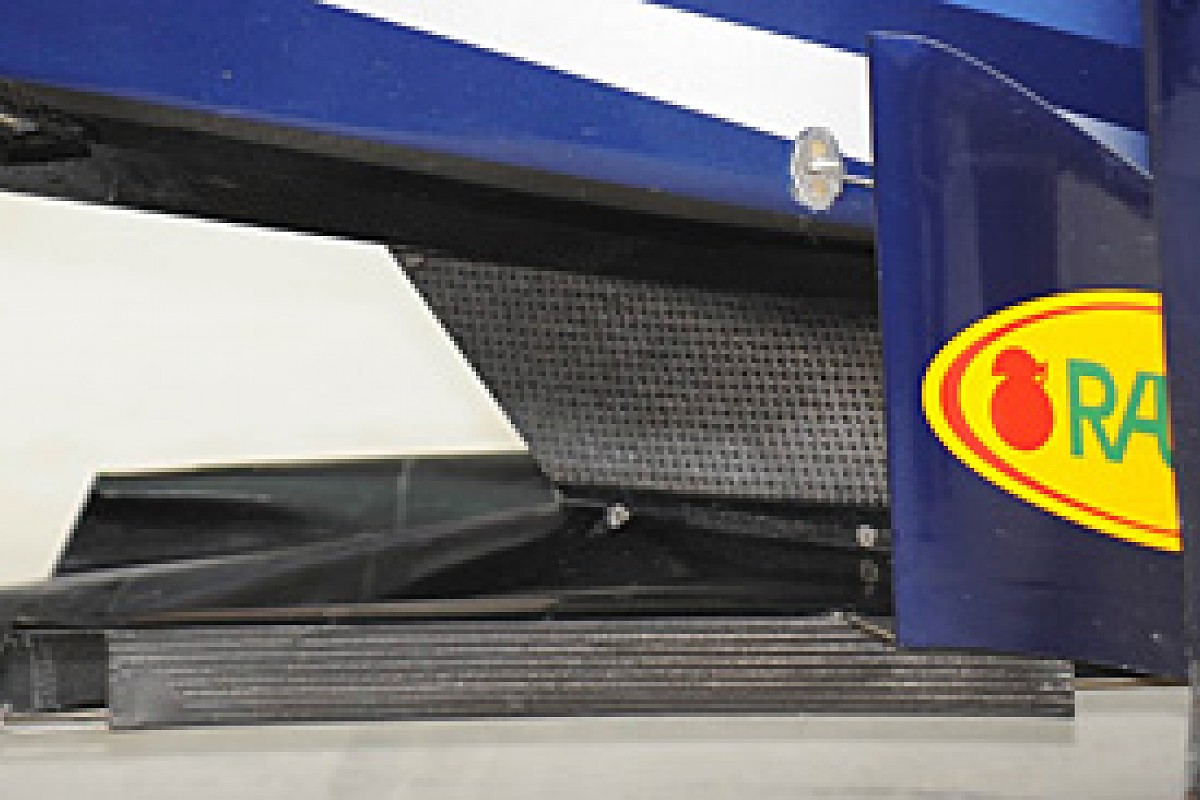 In theory the least blockage here would be best - a nice flat tray that was 5mm thick with two turned up sides on it. But then after that the tea tray has other things to do. This one has no support at the front and to pass the FIA twist tests and have no support at the front means it is a very strong component. If you look at the Mercedes one, it has double-stays on it.

It's a compromise of blockage - any stays you put in there will affect the air flow. Adrian Newey being Adrian Newey thinks 'well the best thing to do is get rid of it' and we'll put some ballast in there and make the thing strong enough in its own right.

The whole point of the Red Bull RB6 is that it is a fairly complex car based on a simple idea. Instead of patching things up, Red Bull does it right in the first place. A lot of teams will put bandages on things which end up being detrimental. It's a fine line between having black and white data or having a good gut feeling that tells you what will be good, then following it through to its conclusion. Adrian is very good at that.

There are a lot of things on the Red Bull that you would really struggle to prove in a windtunnel, but if you have a firm belief in your vision and where you are trying to get to, those things in time will all add up to be positive.

At Suzuka, the Red Bull moved the calliper from being under-slung to vertical. There are mechanical reasons as well as aerodynamic reasons for that. Mechanically, if you have the calliper down below, any deflection in the wheel bearing or axle assembly gives you brake knock-off, which means the brake pedal travel is longer than what you would like it to be.

By moving the calliper up to the middle it doesn't suffer from that because it is at axle height and doesn't deflect as much. It is also the best place for cooling the calliper - because of the way the air flow works. But if you move the centre of gravity of the calliper up a bit you then have a big void underneath the bottom wishbone. So it's very tempting to put the calliper underneath and suffer the consequences of that.

I think the real reason for moving it is to allow Red Bull to have open-house development on their brake ducts. It was seeing other teams develop their brake ducts with turning vanes and vortex generators, and felt it was getting left behind.

F1 is all about transient aerodynamics - not just going fast in a straight-line. I've never heard of anybody complaining about understeer on a straight. You need to work on the car on corner entry and mid-corner because that is where the real performance and in turn laptime is.

Korea was an 'understeery' type of track. Medium speed corners in a Formula 1 car develop that sort of understeer, so to reduce this problem Williams ran a big Gurney flap along the trailing edge of the front wing. It's a means of getting the front wing to work more consistently.

There is a theory - which I agree with - that a Gurney flap on the front wing will work it down to a lower speed. So you would get more front-end grip at 100kph with a flap than you would if you just adjusted the front wing angle, for example. It's a better compromise.

It can hurt the air flow that is left for the car behind you so it's a bit dependant on what your philosophy is. If you have got a car that has got medium-speed understeer and you just can't fix it, a Gurney flap can go a long way to solving it, but it will cost you in total grip. The car needs to be balanced to produce its potential laptime.

Total grip is very important, but so is car balance. If you have a car that hasn't got quite as much downforce but is balanced well, you will go faster with that. Getting the car balanced allows the driver to drive the car - if it isn't balanced the driver is a passenger and only will go as fast as the car allows.