Australia and Malaysia may have been back-to-back grand prix weekends but that didn't stop the teams bolting on new developments aplenty as the competitive order settled down a little and we got a clearer picture of the performance parameters of this season's cars.

That settling in period saw all the teams push harder in the races than they had in Bahrain, and while overtaking still appeared difficult, strategy at least became a little more complex.

In the pit garages, interesting themes are developing and while F-Ducts are still a talking point, outboard mirrors and starter holes have also been under the spotlight. Here is a round-up of some of the key discussion points right now...

Sauber has put the air intake on the sidepod, and that's not a bad idea. There is a lot of airflow over the top of that area and placing the duct there helps to reduce some of the lift, so it's not a bad thing. But if that duct is feeding the rear wing, you can imagine the tortuous route that it has to take.

What is actually happening is that the low-pressure airflow of the wing sucks the air through that duct - rather than pushing it through. The wing is doing the work, and the duct is just an access for the airflow.

There are a couple of things about the Sauber system that confuse me though. In the area where the tube along the engine cover opens out onto the main plane of the rear wing, there is a duct in the top of the wing. That is the 150mm wide area where you are allowed to have a three-piece wing.

So the team's original three-piece wing is legal, with air going into the slotted area of that part of the wing. But if you look at it from the rear it appears to have another flap, which would be illegal - the regulations say that 75mm from the centerline you can only have two closed sections. So the Sauber system is a bit confusing.

McLaren's solution is logical - there's an undersurface of the wing, and the team has tried to ensure that airflow stays attached to that undersurface. The harder you work it, the more critical it is for the airflow and it will separate.

At the point where it separates on the flap, McLaren has put a slot across it. The wing is still a one-piece wing; McLaren has just filled up the void inside it with air, and it's got a slot on the back surface. So the airflow comes around the main plane of the wing, gets quite lazy around the normal slot gap near the main plane and the flap, then the normal slot gap re-energizes that flow before it gets lazy again going up the flap. The airflow from the F-duct then re-energizes it.

What Sauber is doing suggests that if the airflow is that lazy, that early, then it has a pretty poor wing assembly.

But if the team has a wing that needs that airflow fed in that early and the driver does shut it out and stall the wing, that area of stall would be much bigger than that of McLaren's. So Sauber could be trying to stall the wing much earlier.

In my book, stalling the wing and getting an efficient drop in drag is difficult to do, and I would have been tempted to play around with speeding up the air to the wing going down the straight, as opposed to shutting it off. 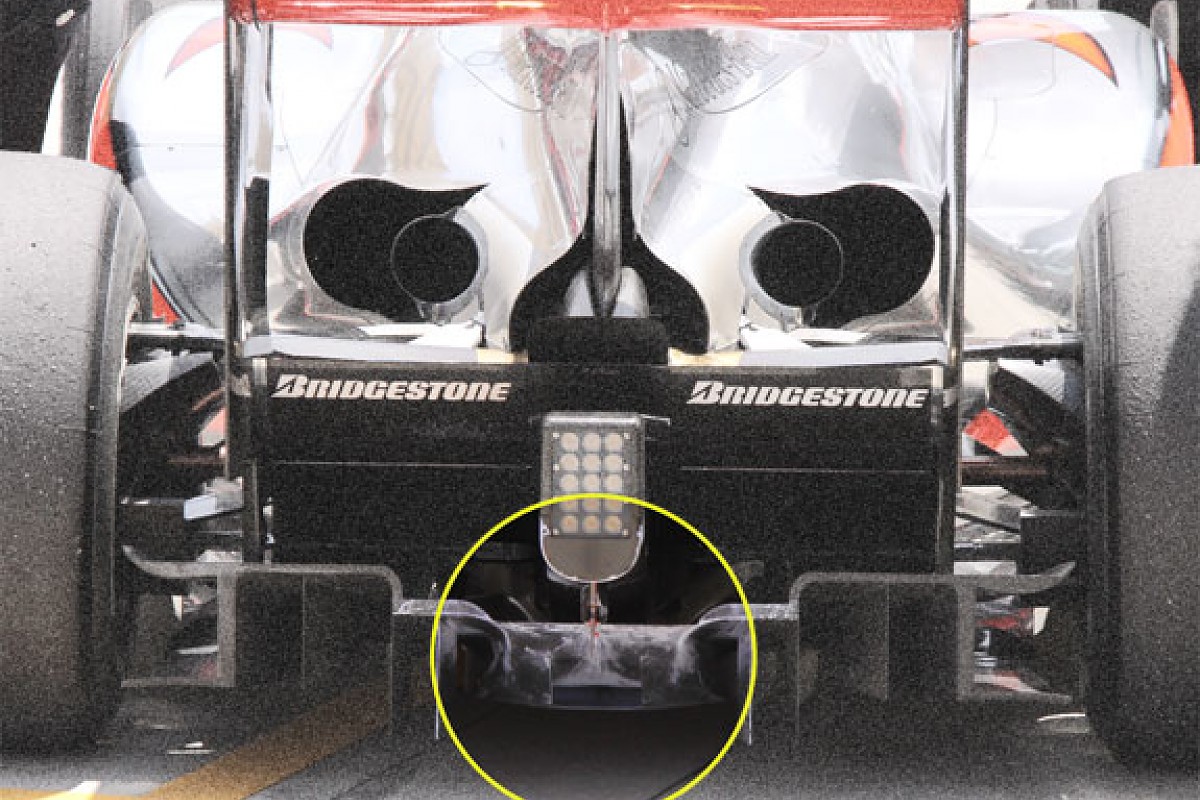 Theoretically the starter motor hole is meant to fit the required size to insert the auxiliary starter shaft. Even this modified version pictured here has been tweaked as little as possible - after all there are no rectangular starter shafts.

You can see the bits that they've glued into the diffuser. If the car is low to the ground that's the area where the airflow stalls and gets separated.

What the team is trying to do is allow the airflow through that slot and keep that which is moving over the rear part of it attached so that when the car comes back off the ground those two airflows would re-attach quickly.

Fast-moving Renault, on and off track

Plus or minus 75mm of a rear wing's centerline, you are allowed to do anything you want. 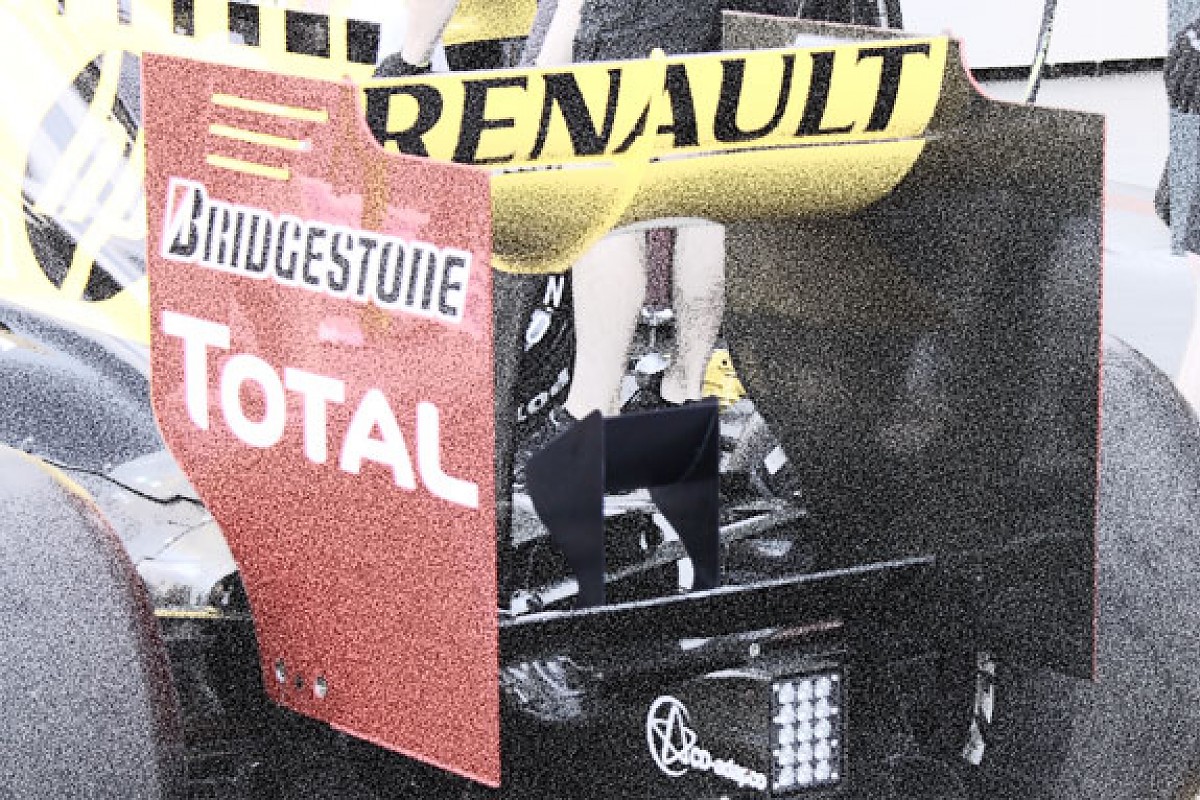 That is mainly because people want to mount wings on internal pillars rather than just the endplates. Renault has mounted its rear wing on a central pillar, and as far as I can see, stabilized it on the endplate.

The little rear wing (see image) is there to help get the back of the R32 working as one. The upper wing and the beam wing are far enough apart that individually they don't 'talk' to each other. Instead they work as independent components. But by placing that small wing in the centre they join up. On its own the wing creates very little downforce, but what it does is get the turning moment of the air on the top wing to combine with the turning moment of the air on the bottom wing. That makes it a very powerful tool.

Its power is much greater than its size would suggest. And if you get all that airflow turning, that also helps the diffuser.

The front wing endplate has always been one of the more exotic bits of the new Renault, and this is a very neat and tidy package. The team has done a good job on it.
What you need to do with the airflow over the front of the car is be as kind to it as possible while making it do the work you need it to do, and this seems to address that issue very well.

Renault has changed it a little since the car was introduced, but generally it has got a very good three-dimensional flow around the intersection of the main plane to the endplates, and also to the flaps to the main plane and the endplates. All that stuff works very well to reduce airflow separation.

The more separation you get the more it hurts the parts of the car behind it, and as the front of the car is the first part to experience the air, it needs to leave a decent flow behind it to allow the rest of the car to do its job.

Renault's endplate ticks a hell of a lot of boxes. 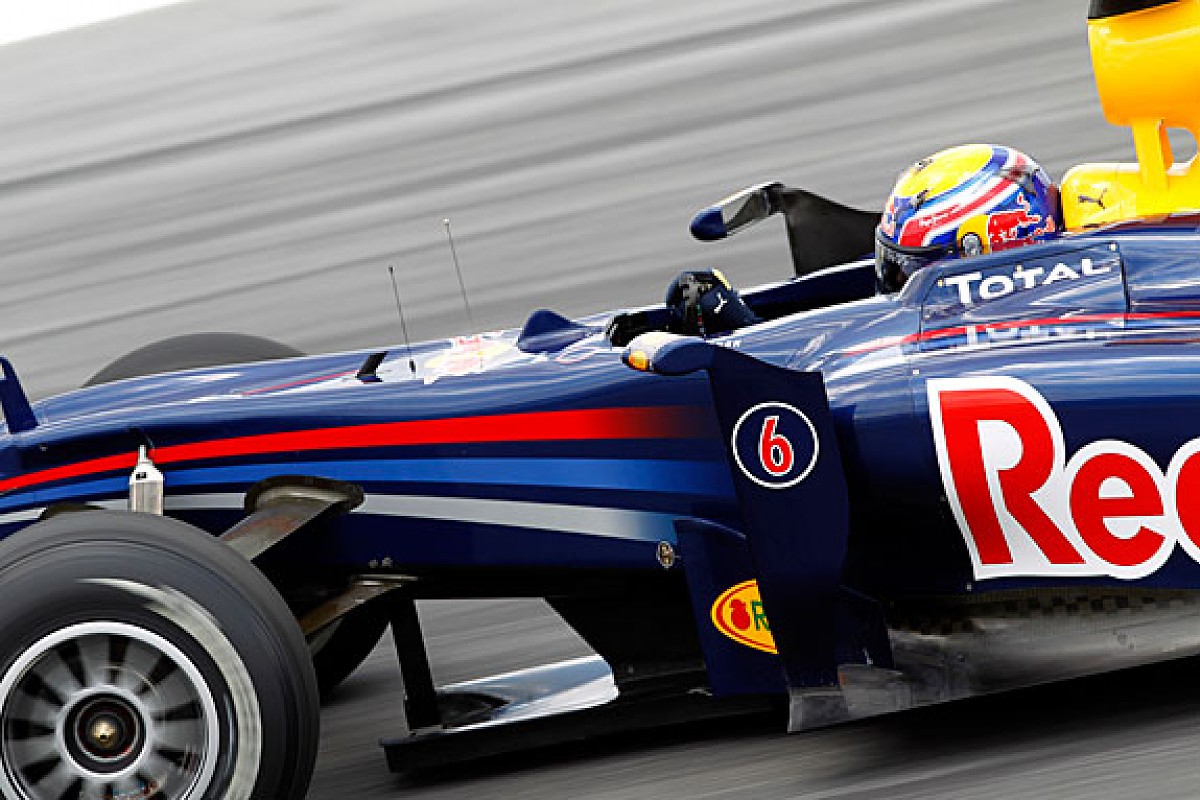 I have previously criticised outboard mirrors because the driver has to tilt his head to see out of them. Now it seems the FIA is going to do away with them because no-one can come up with a mounting that is stiff enough and the mirror vibrates. But if the mirror is inboard, you can still have an inadequate mounting, so that's not a good enough reason to make it illegal.

The mountings need to be stiffer, but with the narrower rear wing that came with the introduction of the 2009 regulations, having the mirrors mounted outboard probably gives you a better field of vision because otherwise the rear wing endplates get in the way. So the FIA has to be careful that it does not create a new problem.

Look at the Red Bull RB6 and the inside of the front suspension and it shows how neat and tidy the cross-section through the chassis is. That encapsulates Red Bull's performance in one picture.

Moving onto the picture of the wheel, and you can see the ring of holes on the hub - it has three drive pegs in the wheels as opposed to having the drive pegs in the hub. There's no difference between the two; all it achieves is to take the torque from the wheel to the axle.

But doing it this way allows the team to have a lighter axle assembly, because you've got a lot of holes in a steel component, and there's nothing as light as a hole. You can see how small the area is between the holes, and that allows the wheel to go on much quicker - the less surface area between the holes, the better it is.

You can also see small holes around the outside where the disc bell joins onto the axle. So the drive peg takes the torque from the axle to the wheel, and these little things take the torque from the axle to the disc bell. That's probably where Sebastian Vettel's problem occurred in Australia - the team had a loose wheel basically, and because of this disc bell arrangement, driving it off the axle - it's probably only 5mm wide, and the only thing that holds it on there is the wheel.

The wheel probably came loose, the disc bell fell off the axle, and hence the German had no brakes. The design is perfect - Red Bull has had the same thing for a long time. It's just one of those things.