Lotus became the latest new team to unveil its 2010 car prior to last week's Jerez test. Its technical chief, Mike Gascoyne, has been around Formula 1 for a long time and knows exactly what is needed to get the job done.

What Lotus has produced is a relatively simple design and I'm sure more complex aero packages will come in the early races. The team clearly took the option of getting the car running while doing more wind tunnel work - so we don't quite yet know what its full potential is.

For an outfit just entering F1, mileage is vital. Gascoyne is clever enough to know that the most important thing in its position is, rather than chasing ultimate performance from the off, getting the car running to cover all the reliability aspects.

That means working through mechanical set-ups and getting a good understanding of the car's electronic systems - which will be invaluable when you get to the first race. Then, if you have set your development plan in the right direction and your wind tunnel is working correctly, you should be able to take the aero developments straight from the wind tunnel onto the race track and bring immediate performance.

For any team, the front wing is make or break in design. It's the first part in the airflow and sets up the air for the rest of the car. In terms of a given team's performance, it is that and the double diffuser that will undergo the most development. The rear wing will simply alter the characteristics of downforce from circuit to circuit.

I would say the Lotus front wing is okay as far as complexity is concerned. The design is in fitting with what is now the norm in F1 - featuring a three-element main assembly and a double element forward upper assembly.

The three-element section finishes with a large splitter, and inside this the main wing becomes a double-element component. The endplates feature multiple vertical turning vanes to help the airflow around the front tyres - which is what is needed to ensure a consistency of downforce with varying steering lock.

To see the level of detail that teams are operating to this year you only need look at the Red Bull front wing.

The issue here is about trying to get the same or more front downforce but with a better flow regime to the back of the car - which will then help the underfloor produce more downforce. If this can be achieved then the car will produce more overall downforce.

Looking at the latest Ferrari design, the change of trim line on the flap assembly is about getting better flow wake coming off the front wing. The upper forward wing is shorter and has an increased angle of attack, while the main plane flap has a reduced angle. This will be an attempt to create as much downforce as far out as possible while reducing the effect on the airflow further inboard.

The endplate is more aggressive with a large gurney flap on the trailing edge and a small vortex generator on the rear of the foot plate. This helps to train the airflow around the outside of the front tyre and reduce the airflow leakage under the endplate by acting as a sort of a skirt.

You really don't want air to hit the front tyre because when there are changes to the steering lock, for example, the airflow will be different. Teams seek a consistency of airflow over the car, irrespective of what the front tyres are doing. It's all a question of detail.

One of the clearest examples of where the Lotus design is quite simple compared to other teams is the roll over bar/engine air intake area.

The Lotus airbox opening and engine cover is very tidy, but with nowhere near the complexity that we've seen from other teams - which are going to extreme lengths in their developments in this area.

One example of this is Mercedes GP, whose airbox design shows how much attention to detail is being put into every area of the car.

For a team like Lotus, when building a brand new car, making an air box that complex can produce extra challenges - especially when you factor in the need to pass the FIA roll over bar and crash tests.

The latest Mercedes GP air intake is a further step on from what McLaren has been pushing hard with in recent years. This area of the car is all about getting good control of the airflow from the driver's helmet and in the airbox itself - both at low and high speed.

Whenever the car is at low speed, say exiting a second-gear corner at 130km/h, you want the airbox inlet to be as big as possible, so as much air as possible is getting into the engine and allowing it to go full throttle with maximum torque.

You have to trade off this characteristic so that at high speed the airbox gets pressurised and, if the inlet is too big, then it will result in excess air spillage.

Such spillage at high speed can hurt the rear wing. You can't stop spillage completely, but what you want to do is keep the air attached to the surfaces of the car in a controlled manner.

The Mercedes GP design tries to control this spillage around all three areas. The team has been playing around with the design, with the extending fins having been moved a bit. Work like this can make it quite complicated and it can be very time consuming to come up with a rollover structure that passes the FIA tests.

Because the F1 regulations are so tight, every little tweak like this counts - and this area of design is all about better flow.

We have seen more work on this area of cars this year because of the refuelling ban, which has resulted in a longer chassis because of the bigger fuel tank. When the car was shorter it was much harder to find space to make such tweaks, but now there is plenty of room, giving more scope to be creative.

To take this area of design to the level that some teams have - like Mercedes GP - can be horrendously expensive. At this stage that is not what Lotus is looking for - it wanted to produce a car that got the team up and running, with nothing trick. If the team does a good job with it, then people who spent a lot of money with their designs will be banging their heads against the wall.

Stepping up the complexity

There are other areas of the car too where Lotus needs to make a step forward. But that will be quite hard because some parts are quite hard to revamp - like the complexity at the front of the chassis, or even the sidepod package. The T127 sidepods are flat-topped and quite large compared to some other cars, and the undercut is much less than we have seen elsewhere.

Maybe the lack of time has defined that it needed to go that simpler route - plus the fact it may not have the budget to have done everything pre-season, so its focus is on that update for Barcelona.

You only need to compare the Lotus design to that of the new Red Bull RB6 to see how much complexity there can be in a current F1 car. Adrian Newey's specialist subject is optimising aerodynamic performance. Whenever you look closely at his cars, you see that every element is a functioning tool for the whole car - like the shape of the top of the chassis, the V-shape nose and the lumps and bumps elsewhere. These details may be quite small as individual elements, but they all add up.

In contrast, the Lotus is very simple. It has a rectangular shape and the nose is short with forward-mounted front wing pillars. There are no trick turning vanes or anything like that under the chassis.

But with the extensive F1 knowledge that exists these days, any aero improvement the team finds in the wind tunnel should automatically translate to laptime. It obviously needs the time to do it, but as long as Lotus's budget is big enough then there is no reason why by somewhere like Barcelona it should not take a major step forward.

I've been doing some analysis of the long run data from the first Jerez test. I keyed in the four longest runs of the test from different drivers - Lewis Hamilton, Felipe Massa, Fernando Alonso and Michael Schumacher - and then compared their performances to what would be a theoretical ideal run.

On any given day, with any amount of fuel on board, the laptimes will always be different. But what is constant is that when you're on a long run, each lap should improve by a certain amount - because you burn off fuel.

Although the rate of tyre degradation can play a factor in this - and you would need a very complicated spreadsheet to calculate all the factors involved - as a guideline I have calculated that an ideal lap reduction would be 0.090 seconds per lap.

I looked at the four runs and then compared them to what I felt was the ideal. It is interesting that Massa was the one who came closest to achieving what I might call a perfect run. The others never quite got there.

On the graph you can see the rate of improvement. Taking the final lap that all the drivers completed, lap 33, there is quite a big difference. 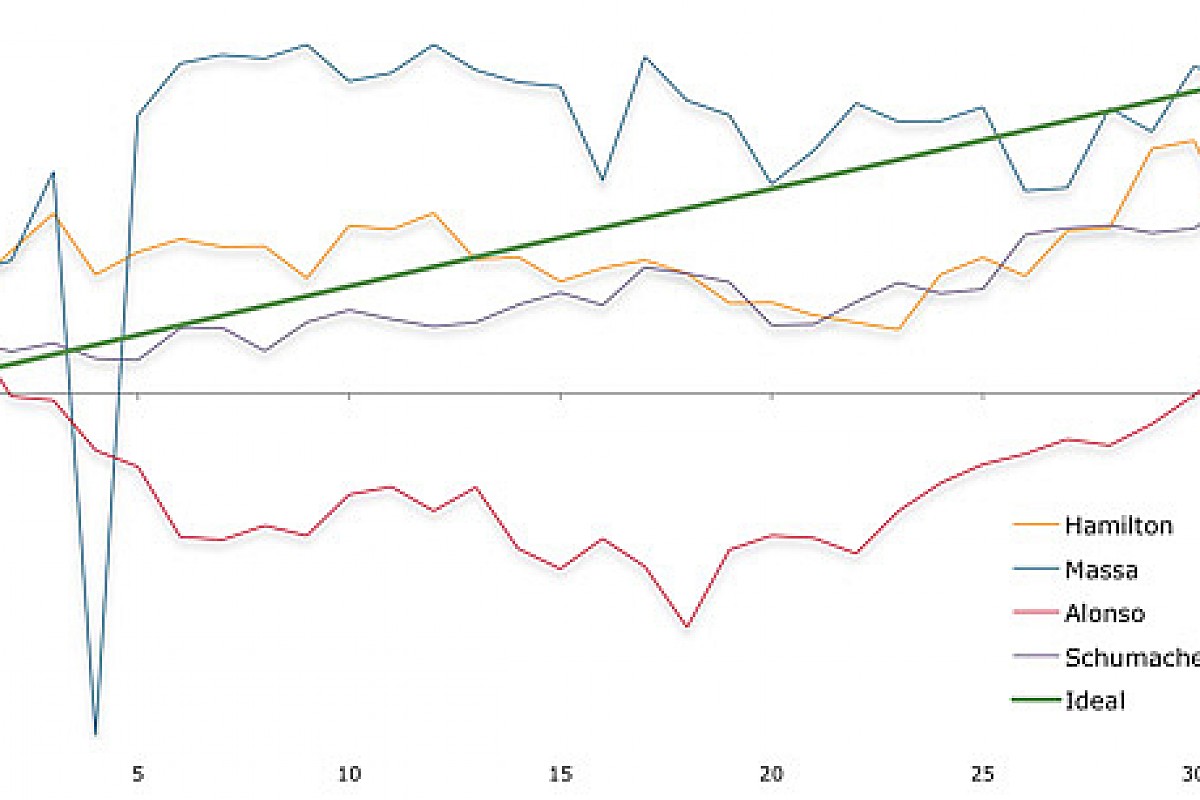 The ideal run is an improvement of 2.88 seconds from the first lap. Hamilton was around 2.3 seconds quicker at this stage (although did two slower laps on lap 33/34), Alonso was only a few tenths quicker than his first flying lap and Schumacher was around 1.5 seconds off. In contrast, Massa was spot on with his 2.897s improvement.

This week's test at Barcelona is the one that really matters, you can wipe out the results of the tests that have taken place already. And this is the first time we are going to go to a track that holds a grand prix.

Valencia and Jerez may have been exciting stuff, but Barcelona has Turn 3 and other characteristics that really kill the front tyres. Teams are going to have to do low fuel runs as well as long runs to make sure the balance of the car is exactly as they need it for a whole race weekend.

They are going to have to do it all in Barcelona, and they will need to get the reliability. This test is the one I would go to with the view that we need to switch the car on in the morning and off at night without any problems during the day, because Bahrain is fast approaching.

From what we've seen, I think Ferrari and BMW Sauber don't look too bad - they are the teams that have moved forward. McLaren might be just behind them and I think Mercedes GP is in there again, as is Red Bull. There is going to be a big bunch fighting it out and that's going to make for an interesting start to the season.