China and Bahrain were the last of the opening flyaway races, so little technical development would normally be expected at these races. However, the shift in performance from McLaren, Ferrari and BMW-Sauber leading, towards Brawn, Red Bull and Toyota, and the FIA's clarification of the legality of the double-deck diffuser, forced teams to push updates through as quickly as possible.

The new trio of leading teams was developing its cars to further raise the bar, while the chasing pack made every effort to close the gap. The rate of technical development for the last two races was as high as ever as each team tries to learn its way around the new rules.

McLaren
McLaren produced updates for every race so far, with new diffuser, front wing and a host of smaller unidentified updates (12 of which were on the car for Bahrain alone) coming across the Chinese and Bahrain GP weekends.

McLaren was quick to respond to the legality of the double diffusers, though its current interpretation is not strictly a double-decker design. The addition of the small flap beneath the rear crash structure does add downforce while a definitive new design is developed.

One change not normally visible was the shape of the step running under the car, which now has a sudden narrowing of the step under the car in line with the cut out S in the floor to act like a gurney flap to accelerate air flow through the diffuser for more downforce.

The front wing also had numerous changes over both race weekends. In China, the win sported a new pair of flaps and gained a cascade element. This was allied to new endplates, although the profile of the main plane of the wing was largely unchanged. These changes could be expected to add front downforce but they probably also aid air flow to the rear, particularly with the endplates and front wheel fairings which are instrumental in obtaining the optimum flow conditions downstream of the wing.

McLaren has been the only team to run KERS on both cars at all four races so far. Along with the beneficial packaging and reliability of the system, the boost has been noticeable in races as the drivers battle to gain or protect positions.

The system is placed low down within the sidepods with the large Litec battery unit (KBP) sitting in the left sidepod and the power controller (PCU) in the right, fed by the large scoop added at the start of the season.

Both units sit underneath the radiator ducting, behind the side impact structures. This positioning of the large units shifts weight, around 20kg of it, forwards - albeit at a small cost to the centre of gravity height as these are 50mm above the car's lowest point. 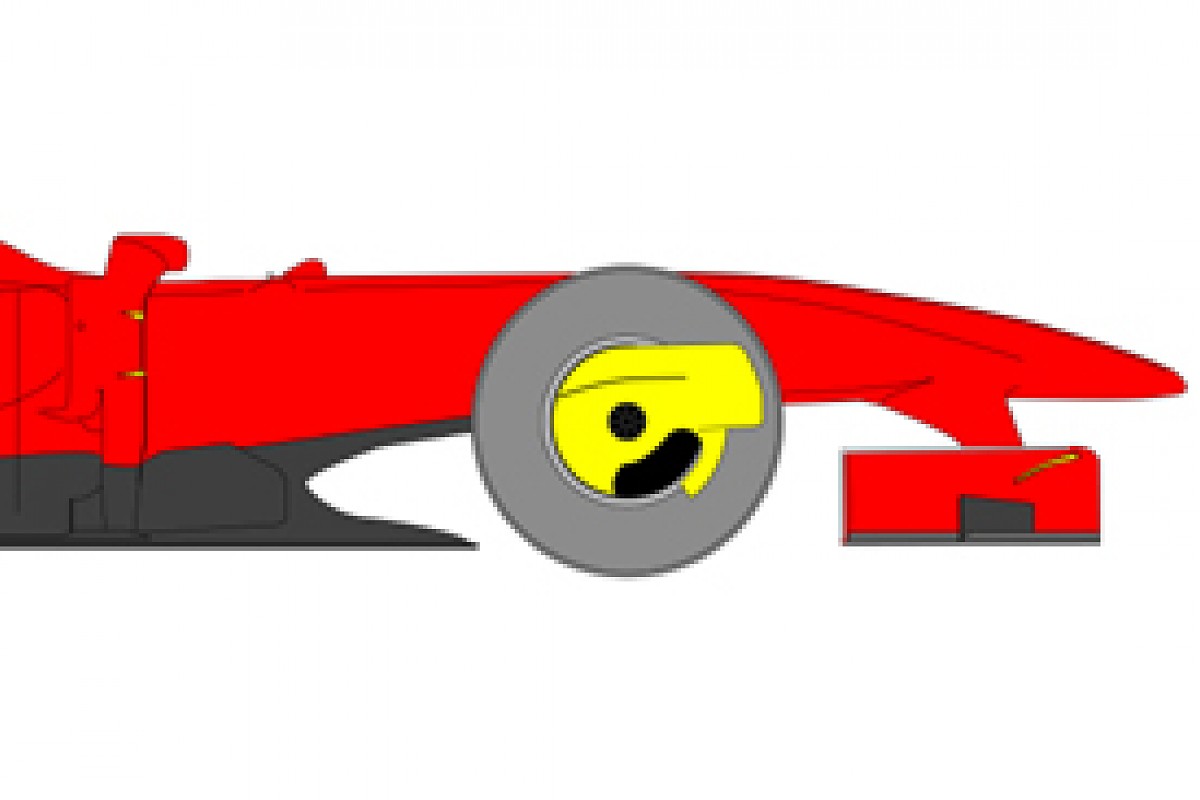 In contrast to McLaren's continuous improvement, Ferrari preferred to develop a single, larger step for Spain. This, already dubbed the F60B by the Italian media, is expected to be a major rework of the disappointing and conventional F60. The main issues of weight distribution and a double-deck diffuser are likely to be targeted with the upgrade.

With this work ongoing at the factory, changes for these races were limited. A small fin was added to the front wing endplate, and new wheel fairings and a subtle alteration to the pod wing were noted.

The wheel fairing marks a departure for Ferrari. Having introduced the concept of the static fairing two years ago, the design has altered little since. The new design grows on versions tested at earlier races where the front edge extends forwards over the wheel rim and tyre. Though not as far as McLaren's version, which extends to the front perimeter of the tyre, it is probably as far as Ferrari can go without reducing the front track width, which would require new front suspension.

The extended leading ednge has also moved the outlet for the air heated by the brakes, which now sits ahead of the axle line.

BMW-Sauber
Like Ferrari, BMW-Sauber has planned a major upgrade for Spain. As such, the F1.09 has barely been altered in the opening four races and the team has paid the price as rivals have better understood their cars.

The updated car for Barcelona will aim to redress the diffuser, sidepods and bargeboards with a lighter or lengthened rear end and a new aero kit. 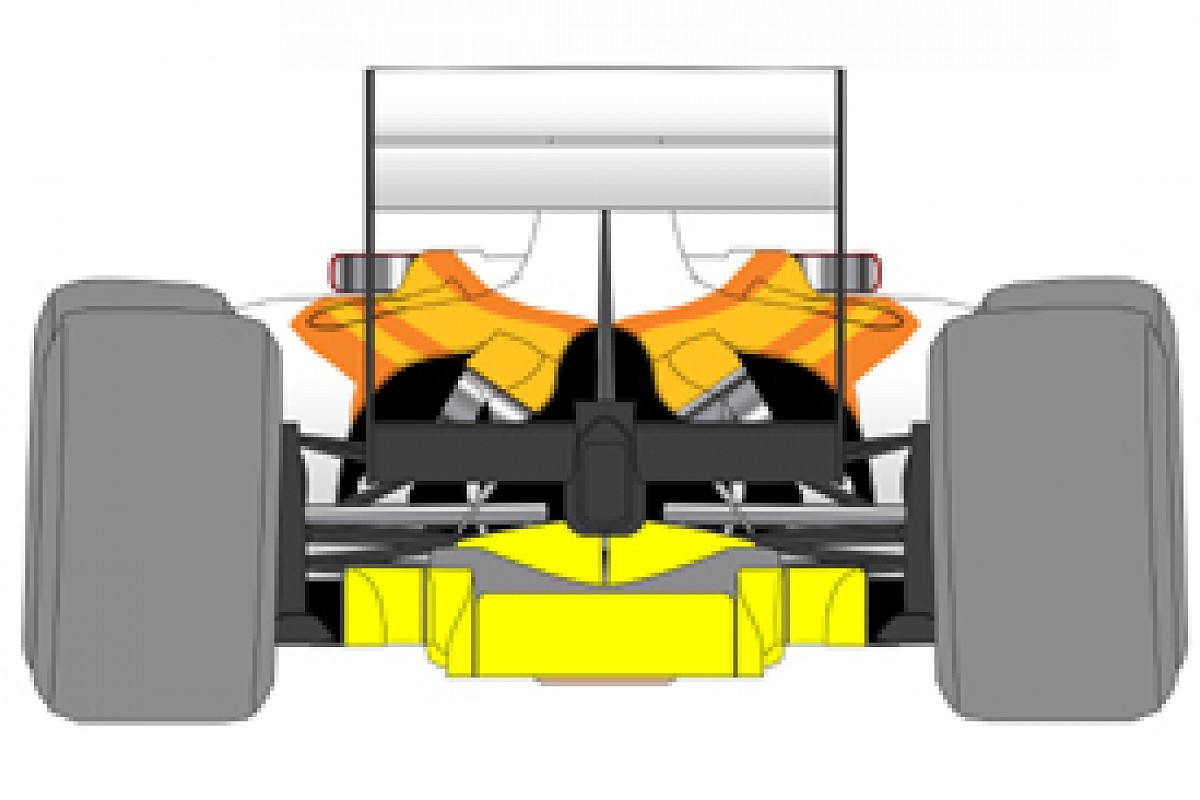 The changes brought initially for Fernando Alonso's car in China and subsequently for both in Bahrain have brought the cars closer to the leaders, and Renault was quick to respond to the potential of the double-decker diffuser. A new front wing flap was already in for Friday practice in China, with the new floor and sidepods joining the next day via Flavio Briatore's private jet.

The new front wing flap uses a jagged trailing edge, affecting the length and height of the flap just in front of the wheel.

Renault's interpretation of the double-decker diffuser is quite clever, even if outwardly it is the same adaptation of the concept. The upper deck is very wide, probably the same maximum width as the step under the car (500mm). The sloped roof also squeezes a larger volume, covering the area above the diffuser. Maximising this volume gives Renault the most potential to extract downforce from the upper deck. The revised shape under the car also helps to feed this section. Normally the edge of the step flows from the front splitter out to the maximum 500mm, and back down to the minimum 300mm at the rear axle in a single, gentle curve.

An aggressive step is the sudden narrowing of the step to create a bottle-like shape to energise the airflow along the step. It is this airflow that enters the upper deck to add even more downforce.

The new floor was joined by a revised top body featuring a slotted tail to the sidepod, rather than the bulbous version raced to date. This creates a narrower bottle shape to maximise flow over the top of the diffuser. The exhausts had to be moved to exit low down through the larger of the slots. This initially burned the paint but heat shields were hastily added to protect the bodywork, although it wasn't fully resolved in Bahrain.

Toyota
Having been on the pace in the opening races after leading the design revolution with its triple diffuser, Toyota made no major changes for the flyaway races, despite improving to set the qualifying pace in Bahrain.

The brake ducts and pod wing gained fins for China and Bahrain, but these were minor tweaks and would not have contributed a large percentage of the 0.3s improvement in Bahrain.

Incidents in the Chinese Grand Prix showcased Toyota's rapid-change nose cone set up. The cone itself uses the normal fastening system but is now fitted via a trolley operated by a mechanic. This is partly to improve weight distribution as the nose cone is unusually heavy this year, plus the Toyota uses a hydraulic system for its front wing adjuster. This requires a multi-pin connector for the electronics and a dry break manifold for the hydraulics, making it more critical to accurately fit to the nose cone. 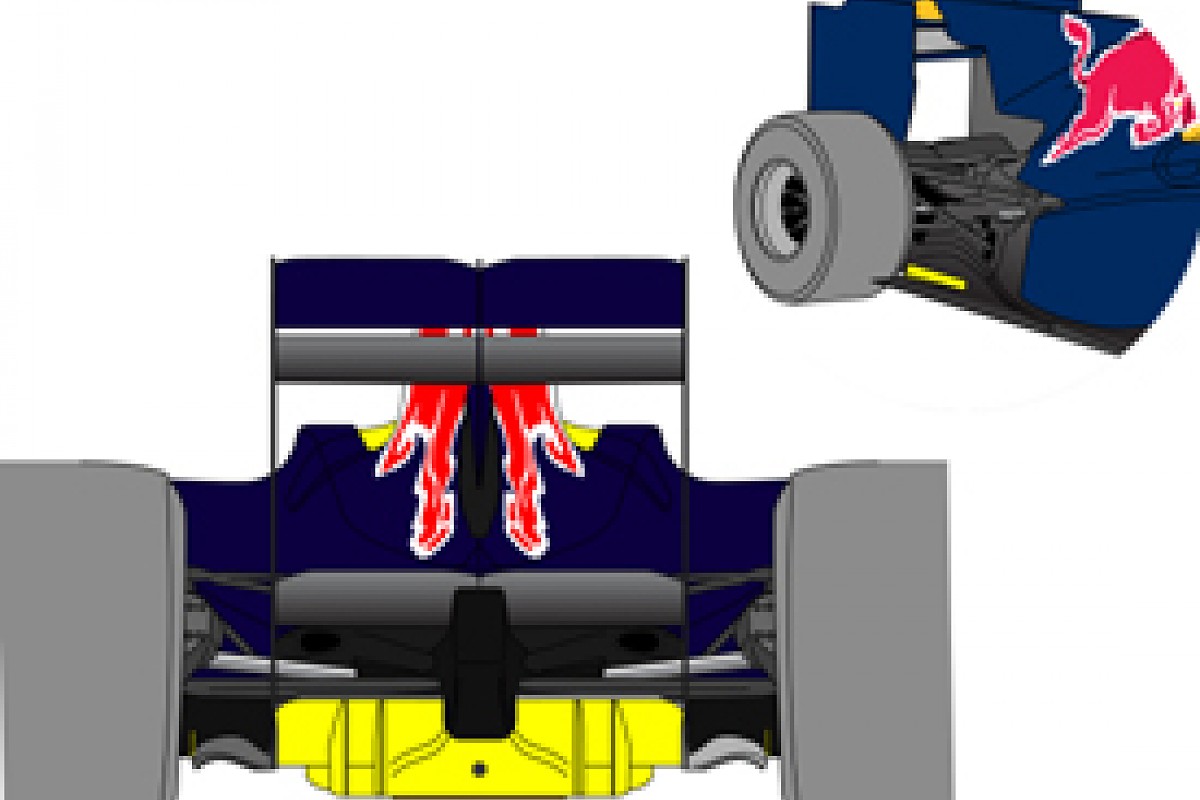 Although Red Bull has reversed a slight deficit to Brawn's pace in the last two races, the car has changed little visually. There are suggestions that it lengthened the car for China.

If this is the case, and the rear wheels have moved backwards, it would effectively shift weight forwards, over the front wheels. Subtle changes to the floor around the rear wheels, and gearbox issues, also suggest this might be the case. A change of just 50mm could shift as much as 5kg forwards, which would improve the rear tyre life and maximise the grip of the front tyres.

For China, Red Bull also changed the floor around the rear wheels, which is to do with the diffuser. The car already has a narrow diffuser and its lack of volume is made up for by the improved sealing of the rear wing endplates, which extend down to meet it. This effectively makes the diffuser think it is longer than the 350mm allowed in the regulations. The narrower diffuser makes the floor between the rear wheel and the endplates much wider, and Adrian Newey has already formed this area into a bulged venture. The change in China made a slot in the floor ahead of this in the bottle-shaped area, which would serve to improve the sealing effect of the venture on the diffuser and the air flow around the rear wheel.

Both cars suffered driveshaft seal failures in China, which may be related to the revised rear suspension and wheelbase. The greater angularity of the driveshaft probably overstresses the seal, which split and leaked the white grease used to lubricate the tripod joint.

As well as the wheelbase change, Red Bull aided weight distribution by running a very heavy front wing. This appears to flex over bumps and kerbs more than other teams, but it takes two pit crew to lift the nose cone assembly around the pit area, suggesting it is heavily ballasted to suit slick tyres. 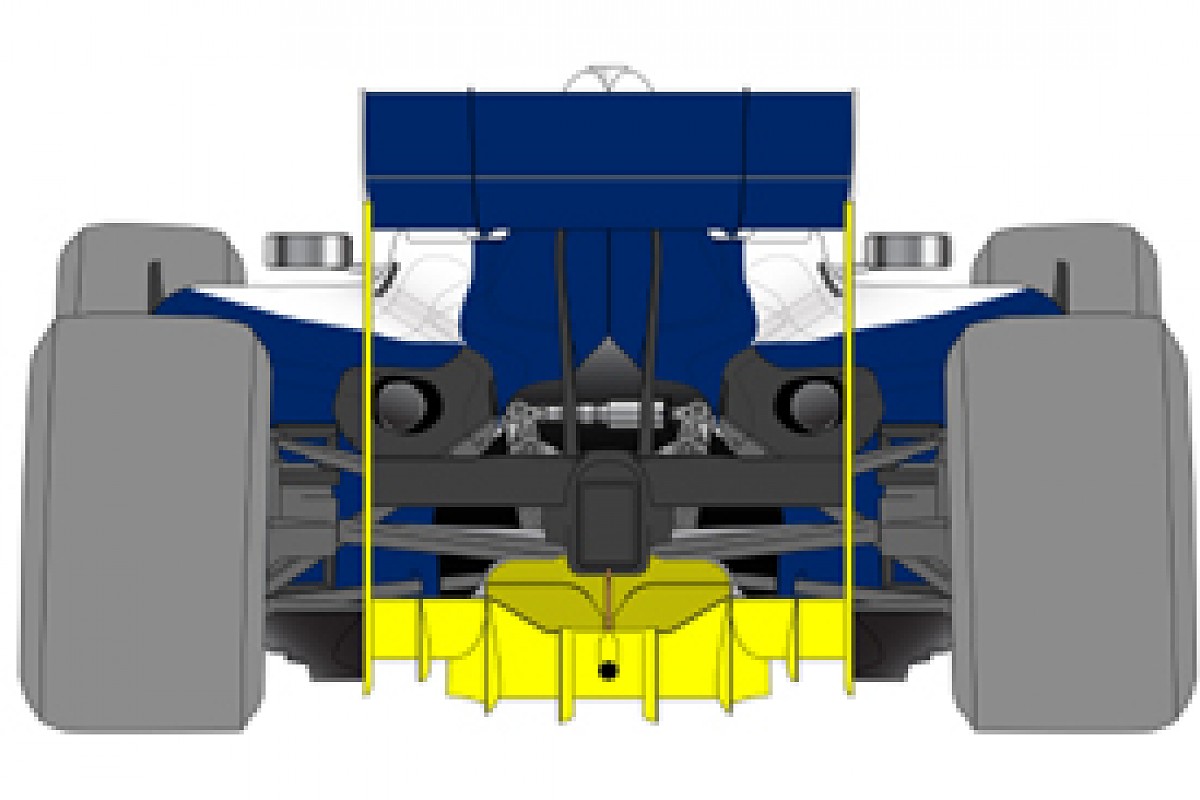 Williams already runs the double deck diffuser and has taken another step in its evolution which probably creates the template that most teams will eventually adopt.

Having seen Red Bull's cars equipped with a narrower diffuser outperform its own car, Williams has taken the extended rear wing endplate and adapted it to its own car. It now exploits the better sealing of the lower endplates and the higher expansion ratio of the double-decker set-up.

The old diffuser had sloped outer channels so only a small proportion of the diffuser has been lost to the change. Williams has so far only missed the central extension, as fitted to the Toyota, as an area unexploited in the search for efficient downforce.

This development appeared only on Nico Rosberg's car in Bahrain, but the extra parts will be available for Kazuki Nakajima in Spain.

Force India
Even with its more limited resources, Force India prepared a double deck diffuser for Bahrain. Its version is similar to McLaren's interim diffuser, but with an upper deck added. As a result, the lower deck uses a shallo, curved roof and is narrower at its exit than that of Renault, which also adopted the design in season.

Force India uses the McLaren gearbox so the starter shaft hole is offset to the right and the new floor is mated to a revised sidepod. This new upper bodywork has a truncated exit to the sidepod which is blanked off to suit the cooling requirements.

Brawn
There were no visible developments in China or Bahrain, other than cooling holes being made in the tail of the sidepods to cope with the heat in Bahrain. It had previously been suggested that it was overcooled due to the lesser heat output of the Mercedes engine compared to the Honda it was originally designed for. The much-reported Spanish GP update is still expected to feature reduced cooling capacity, despite the problems in Bahrain.

The update is also expected to include a revised diffuser and front wing, and changes to lower the gearbox and rear suspension. The latter ones coming because the Mercedes engine has a larger crankshaft centreline than the Honda, which was at the minimum allowed 58mm.