Nearing the end of the 1994 Formula 1 season, the Japanese Grand Prix provided a first opportunity for the fierce title battle between Michael Schumacher and Damon Hill to be put to bed.

Benetton driver Schumacher arrived at Suzuka leading Hill by five points after a crushing victory at Jerez, meaning victory with his rival any lower than second would be enough to clinch his and Germany's maiden world championship - and give some kind of closure to a fraught year overshadowed by the deaths of Ayrton Senna and Roland Ratzenberger at Imola.

Schumacher took another step towards clinching the crown after sticking his Benetton on pole position. But when the rain came on Sunday, it proved far from being a formality. A classic fight played out at the front - albeit one told in two acts in the last grand prix ever to be decided on aggregate time.

Thrust unexpectedly into the role of Williams team leader, Hill had clawed his way back into the title fight having trailed Schumacher by 31 points with six races to go. His cause had been assisted by Schumacher's disqualification at Spa and a two-race ban preventing him from starting the Italian and Portuguese GPs, his punishment for ignoring a black flag at the British Grand Prix earlier in the year. Hill took a hat-trick of wins at those events to sit just a point off the lead, but Schumacher's winning return at Jerez looked to have swung the balance back in his favour.

As well as battling Schumacher, Hill was also wrangling with internal politics at Williams as the team gravitated around 1992 world champion Nigel Mansell, who returned in place of David Coulthard for the final three races of the season after concluding his two-year stint in IndyCar with Newman-Haas Racing.

"Williams couldn't have done a better job of making me feel like an understudy to Nigel if they had tried," Hill wrote in his 2016 autobiography, Watching the Wheels. "They hung on his every word while he told them exactly what I had been saying all year about the improvements that needed to be made to the car." 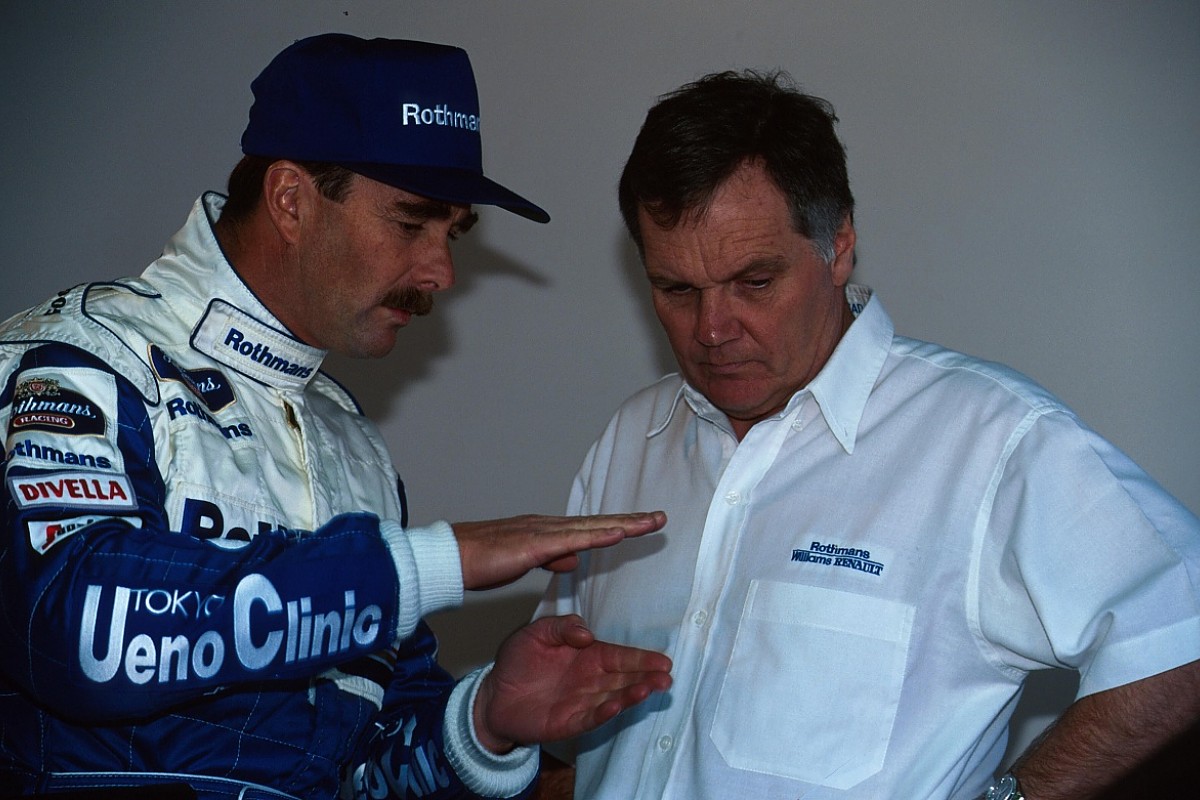 In his book, Hill recalls Williams technical chief Patrick Head telling him after qualifying: "You walk around with a long face, you're glum, you're never happy. It affects the team." This was after sticking his car second on the grid, with Mansell back in fourth.

Hill's frustration quickly dissolved in the rain shower that hit Suzuka on Sunday afternoon, forcing him to focus on keeping up with Schumacher when the race truly got underway following an early safety car.

"I remember seeing a marshal jump in among the tyres at the point where I hit. I'll never forget this man's face as the front of the car caught him and he was flung through and over my cockpit" Martin Brundle

"I couldn't see anything," Hill recalled. "It was like having a garden hose turned on you. All I knew was, if I lost sight of the red light on the back of his Benetton, he'd be off into the distance."

It brought out the very best in Hill - but even that wasn't enough.

"I hung on, and, for the first dozen laps, I witnessed the most incredible driving display I've ever seen in a racing car," he said. "I lost count of the number of times Michael went off the road, and yet he never lost a beat.

"I was driving on the edge of my ability, up here in the thin air with one of the best there has ever been. But, bit by bit, Michael was starting to get away."

Schumacher and Hill may have been driving at the peak of their powers, but all drivers - as well as Jordan team patron Eddie Jordan - were begging for the race to be stopped due to the dangerous conditions. The tipping point came after Gianni Morbidelli crashed hard at the exit of Dunlop, tearing the front wheels off his Footwork chassis.

As the car was recovered, McLaren driver Martin Brundle ran off at the same point, narrowly avoiding the recovery truck but colliding with a marshal. 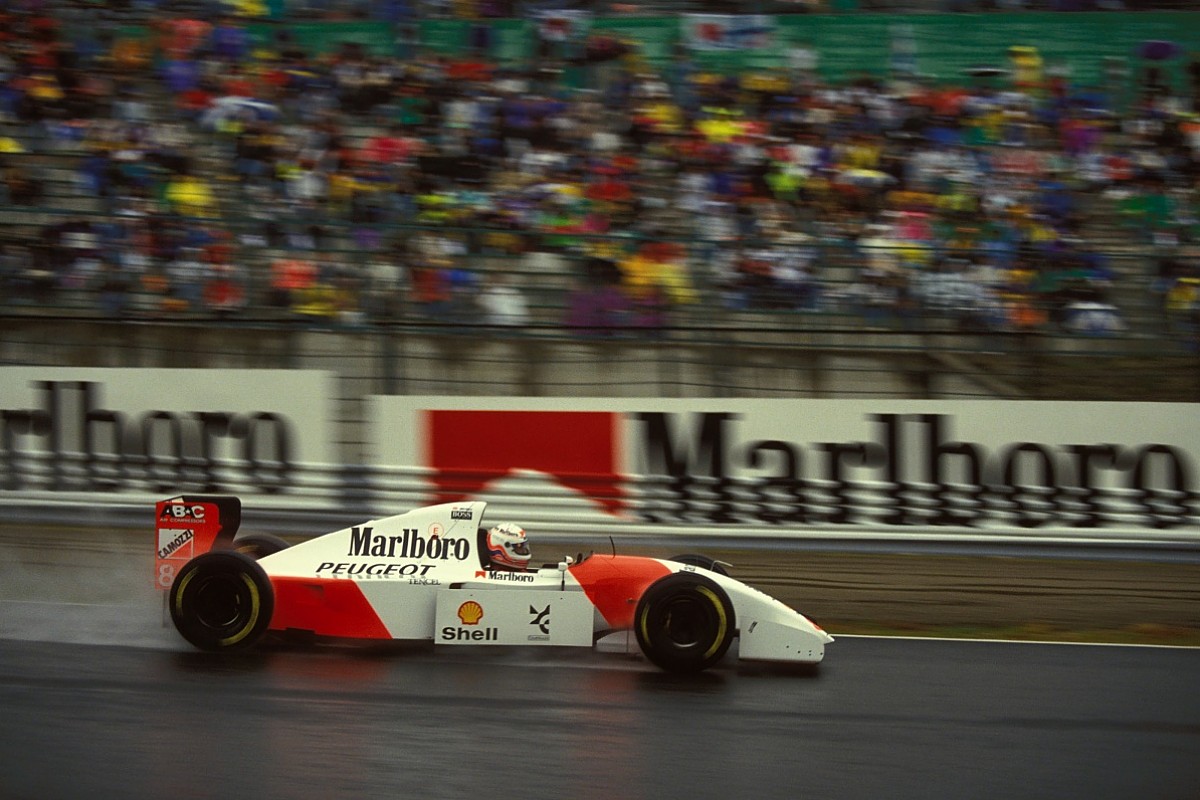 "I could see I was heading absolutely broadside, shoulder on, to a mini caterpillar truck," Brundle later wrote in his 2004 book, Working the Wheel. "This was the price for racing on an old circuit that did not have the benefit of an internal road for safety vehicles. I thought 'That's it, I've had it, I'm going to go under this thing.'

"I miraculously missed the caterpillar by less than half a metre. I smashed into the tyre barrier and I remember seeing a marshal jump in among the tyres at the point where I hit. I'll never forget this man's face as the front of the car caught him and he was flung through and over my cockpit. The marshal was lying on the ground with a bone sticking through the leggings of his overalls."

It was a chilling reminder of the safety improvements F1 needed, coming near the end of a season that had started with the ultimate wake-up call at Imola, then Karl Wendlinger's accident at Monaco and Pedro Lamy's aerial shunt while testing for Lotus at Silverstone. The marshal was left with a broken leg, but when Brundle met him one year later, he said he "could see the lasting effect of his injury."

The race was finally red flagged on lap 15, Schumacher's lead standing at 6.8 seconds over Hill. As the rain eased, officials decided to resume the race, but to run it to aggregate times and add the two segments of the race together to form a final classification. It would be the final time in F1 history such a provision would be used.

Once the rain had eased enough and the track had been cleared, the remaining 15 runners resumed behind the safety car before being released again. Hill knew he had to pass and pull out a gap on Schumacher if he stood any chance of winning the race and keeping his title hopes alive - but his hopes were soon handed a huge boost.

"To my surprise, [Schumacher] dived into the pits," Hill wrote. "He was going to stop twice whereas I would only be stopping once, which explained why he had been able to pull away. Playing safe would work in our favour as Michael rejoined and was held up behind the midfield cars and their spray. I had the big advantage of clear vision and an empty track in front of me."

Hill came in for his stop on lap 25, but had further complications in the pits: "The mechanics had trouble getting the nut off the right-rear wheel, which meant it was never changed - except I didn't know that."

He was able to emerge second on-track, but still leading Schumacher on aggregate, with the Williams pit wall furiously working away at the numbers. Schumacher came in for his final stop with 10 laps remaining, having swung the time advantage back in his favour to lead by four seconds on aggregate. 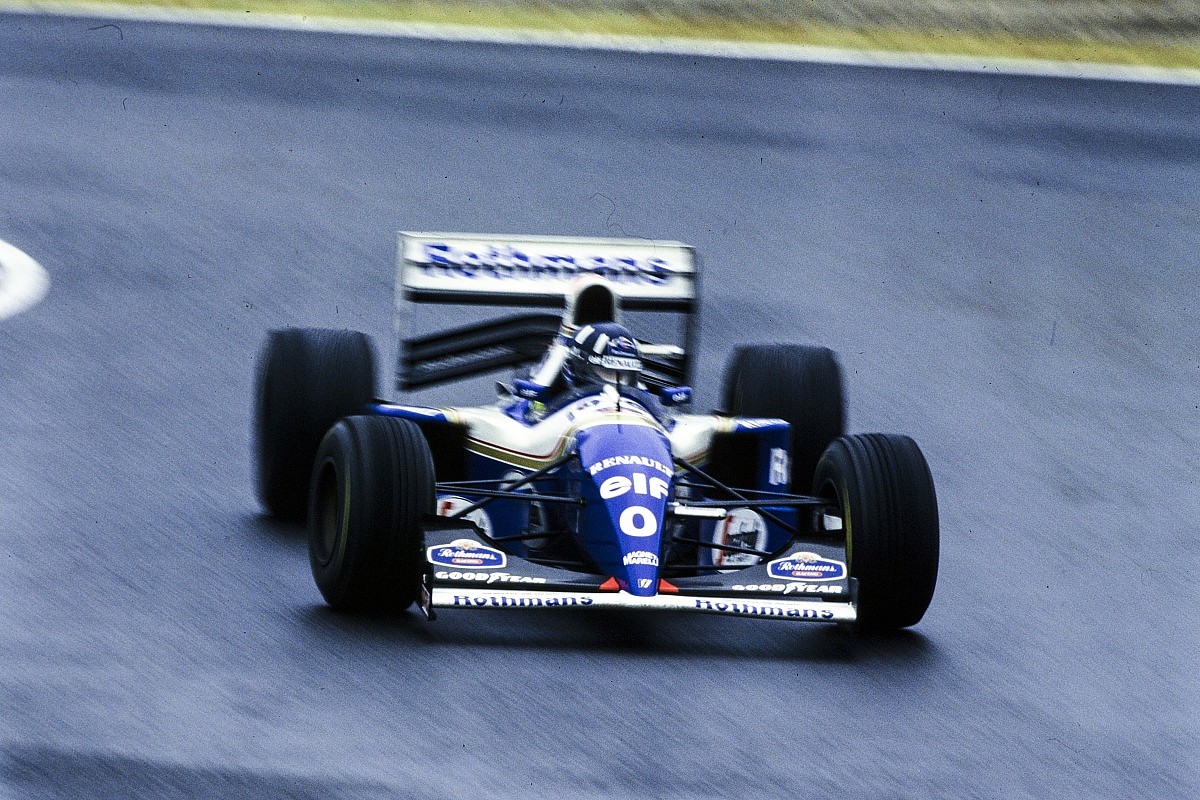 The aggregate gap swelled again to almost 15 seconds, but Schumacher was able to make serious inroads thanks to his fresh tyres. Hill, meanwhile, needed to keep the buffer at over 6.8 seconds - no simple feat.

"I wasn't receiving much information on the radio and I remember glancing at a giant trackside screen while trying to learn more about our relative positions," Hill wrote.

"I watched my hands moving the wheel, completely free to do whatever they wanted in response to the car moving beneath me. I would never come close to driving like that again" Damon Hill

"Eventually I caught a brief glimpse of Michael on the screen, so I knew where he was on the track, but I had no way of knowing how the aggregate time was panning out. I simply had to push as hard as I could on worn tyres."

Schumacher had been gaining rapidly on Hill at a rate of over one second per lap, putting the Williams driver under pressure as his lead dwindled. Hill felt "completely spent" - but then produced the lap of his life to clinch the victory, something he later recalled as being an out-of-body experience.

"From the moment I exited Turn 1, I did not drive the car in any normal sense until I reached the hairpin halfway around the lap," Hill wrote. "I was possessed. I watched my hands moving the wheel, completely free to do whatever they wanted in response to the car moving beneath me.

"I was just an observer of something phenomenal. I would never come close to driving like that again."

Hill crossed the line 10.1 seconds clear of Schumacher, meaning victory was his by 6.8 seconds on aggregate. 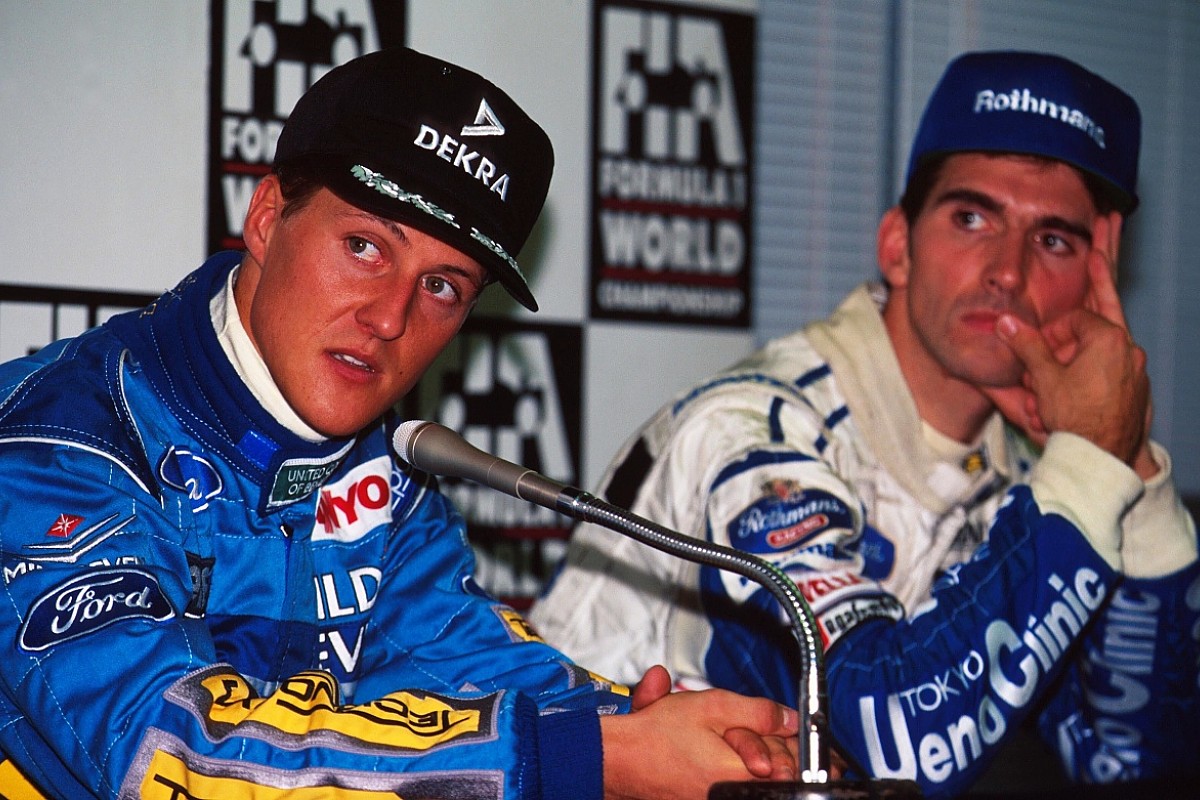 "It had taken everything out of me, and then this thing had happened on the last lap that I had no explanation for," Hill said. "I kept it to myself for years, trying to understand what had happened. But for now, this result was all that I ever wanted: to know I could do it when it really counted."

It proved Hill could go toe-to-toe with Schumacher, who was gracious in defeat despite his lead being reduced to just a single point before the Adelaide finale.

Importantly for Hill, though, it showed Williams that he was the man to back - ironically, coming in the best display of Mansell's comeback. True, he won in Australia, but only after Hill and Schumacher had both dropped out of the race.

After making a poor start, Mansell had won a close scrap with Jean Alesi in the closing stages, who told the '92 world champion: "You're completely mad, but very quick for an old man!" Alesi would have the last laugh though, taking the podium thanks to the aggregate times - something Mansell admitted he had forgotten about.

Aggregate times have long disappeared from F1's rulebook as a method to decide races, their presence and usage only being a recipe for confusion. But their final usage did nothing to dampen the heroics of Hill that day at Suzuka. Arguably, even at the peak of his success in 1996 en route to the title, he would never scale such heights again. 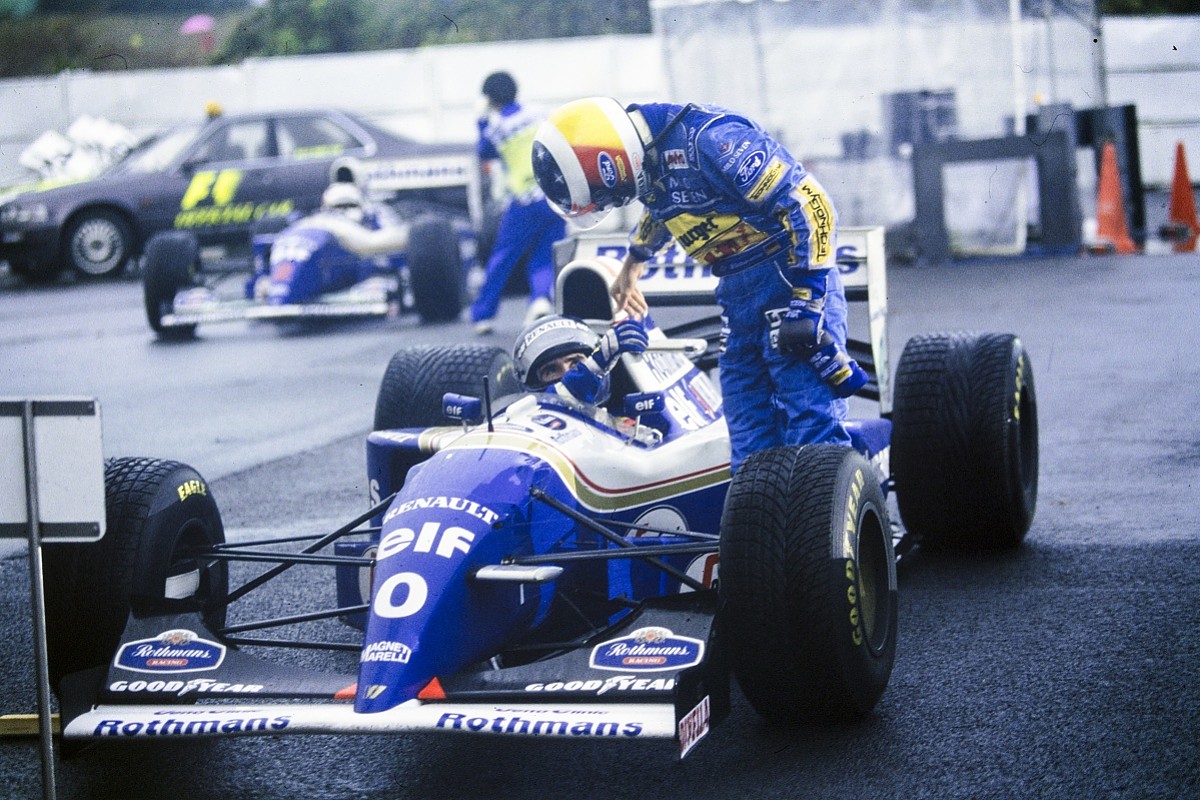