When Red Bull Racing first joined the Formula 1 grid in 2005, few could have foreseen the success that lay ahead or the juggernaut it would one day become.

Rising out of the ashes of the old Jaguar operation, Red Bull brought an injection of fun and vibrancy to the F1 grid in its early days. The Energy Station motorhome - and its buoyant Monaco equivalent - changed the game for F1 hospitality, while major movie franchises such Star Wars and Superman movies both enjoyed on-car branding.

Famously, team boss Christian Horner would dive into a swimming pool wearing nothing but a red cape after David Coulthard scored the team its first podium at Monaco in 2006. As the tobacco-rich era of F1 turned to ash, Red Bull quickly became the loudest team in the paddock.

But beneath it all was a long-term desire from billionaire owner Dietrich Mateschitz to reach the summit of motorsport and turn Red Bull into world-beaters. To do so, the team would have to change perceptions. And at the 2009 Chinese Grand Prix on this day in 2009, the team took the first major step towards doing exactly that.

The arrival of Adrian Newey from McLaren marked an enormous coup for the team that would later pay huge dividends, yet his first two designs - the 2007 RB3 and '08 RB4 - struggled to make a splash. Issues with the team's wind tunnel caused setbacks, and the mature nature of the regulations made it hard to make any huge advancements on Red Bull's placing in the midfield.

In shifting its attention to the opportunities provided by the new-for-2009 regulations, Red Bull struggled through the closing stages of the 2008 season, receding even behind junior team Toro Rosso which took its first pole and race win through Sebastian Vettel at Monza. Vettel had already been named as a Red Bull F1 driver for 2009 following David Coulthard's decision to retire, stepping up to partner Mark Webber.

But the rules overhaul for 2009 offered Red Bull the chance to make the step forward it craved as the field was shaken up. 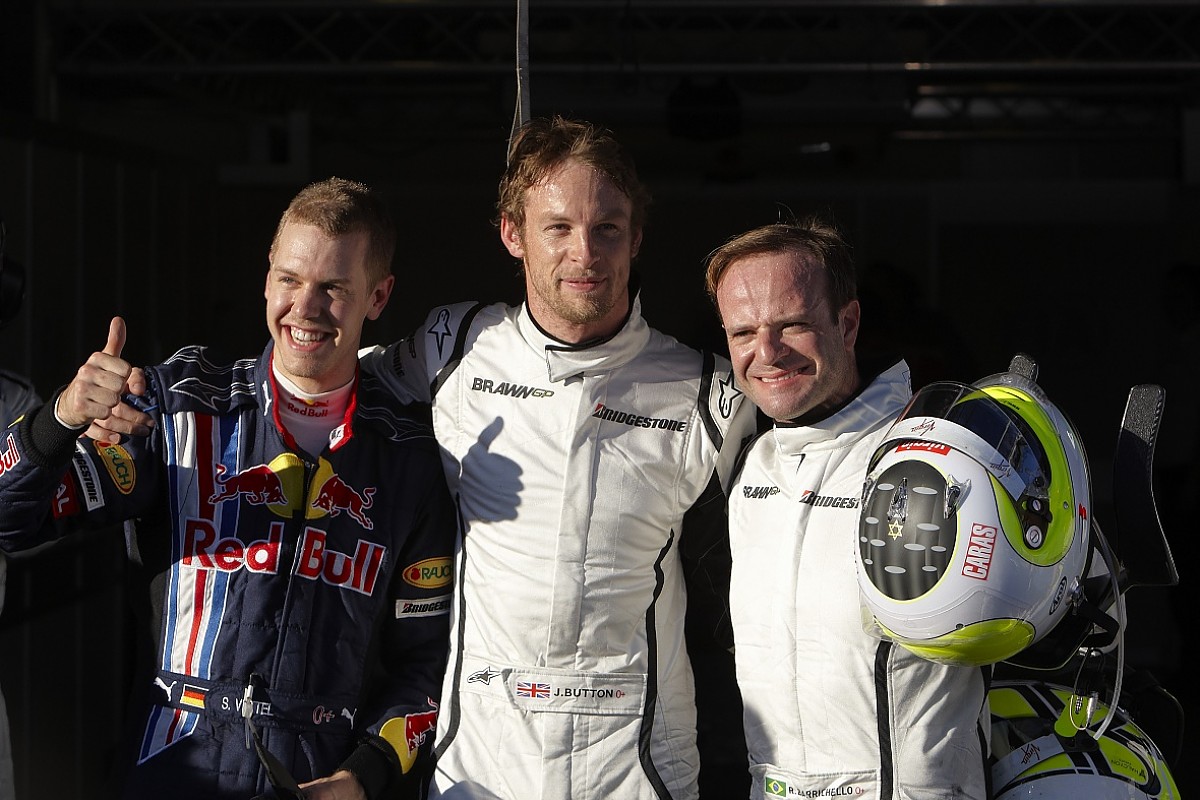 The former Honda team, hastily re-named Brawn after its takeover by the current F1 managing director of motorsport, may have dominated the opening round in Australia, but Vettel was the only driver to really give chase to Jenson Button before a last-lap clash with Robert Kubica cost him second place.

Vettel then spun out in the Malaysia downpour and stopped when his anti-stall didn't work, while Webber brought home Red Bull's first points - 1.5 of them - of the season, classified sixth in the shortened affair.

Two weeks later in Shanghai, Red Bull was ready to prove it had the pace to fight with the Brawns - but faced another setback. A recurring driveshaft issue in practice had limited both Vettel and Webber's running, prompting the team to bank on just a single run in each stage of qualifying.

The gamble paid off as Vettel swept to his second pole position and, more significantly, Red Bull's first. Webber was less than three-tenths off his team-mate in third, although both were running lighter fuel loads than chief rivals Rubens Barrichello and Button in fourth and fifth respectively. The advantage still appeared to lie with the Brawn cars.

Raceday in China offered a flurry of deja vu from the Sepang deluge. Heavy rain in the build-up to the start left the track soaked, so much so that a safety car start was required. Vettel sat in the wheel tracks of the safety car for eight laps before it came in, by which point Webber had moved up to second after the short-fuelled Fernando Alonso was forced to pit in the Renault.

Still shorter on fuel than the two-stopping Brawns, Vettel and Webber had to build a gap through the opening stages before the first of their three scheduled stops. The duo were able to streak clear in the spray, with Vettel's advantage over third-placed Button standing at 11 seconds before his stop on lap 15, allowing him to emerge back on-track only trailing the Brawns.

Webber had come in one lap earlier, but lost track position to Sebastien Buemi's Toro Rosso and the Ferrari of Felipe Massa, both of whom were yet to pit. 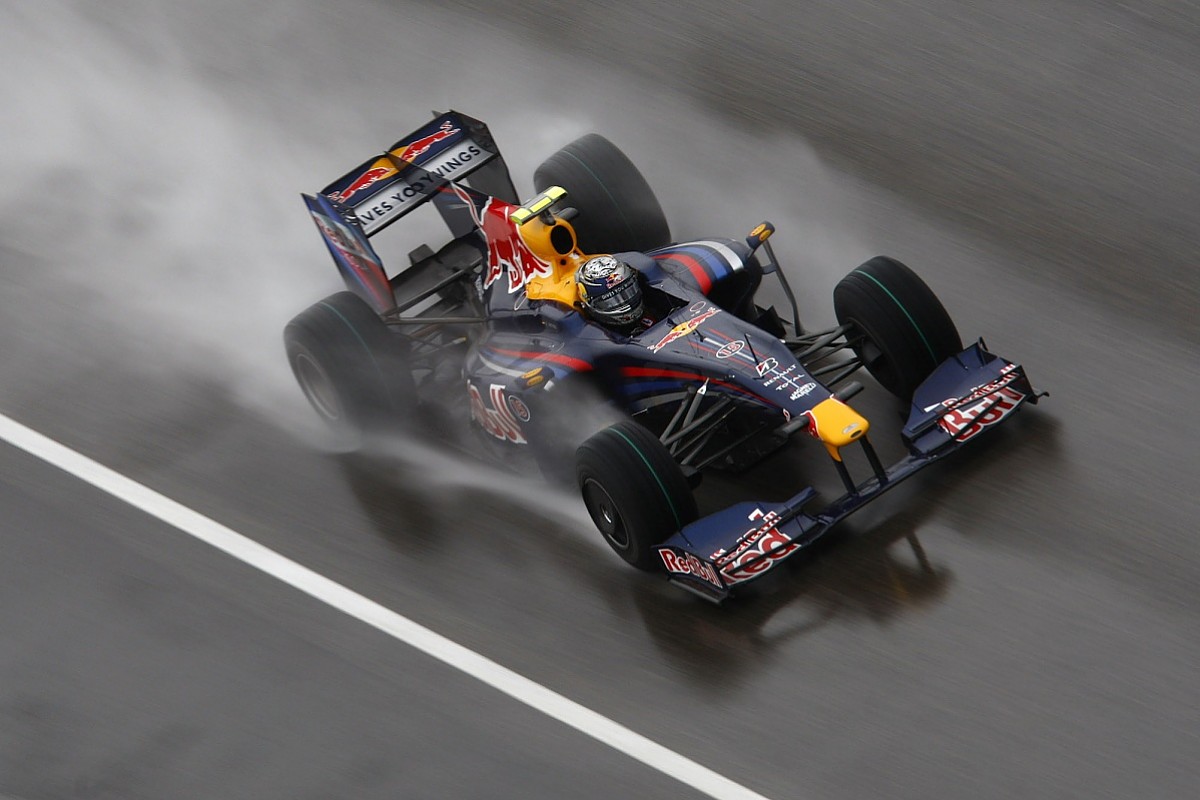 The safety car sparked by debris from Jarno Trulli's Toyota was a mixed blessing for Red Bull. While it wiped away the advantage that had been built in the first stint, it ensured they would be able to revise their strategy to get home on two stops, putting them equal to the Brawns for strategy.

Vettel passed Button in the pits, while Webber rose to third after Barrichello was forced to queue behind his team-mate, slipping back to sixth in the process.

Vettel had almost lost his chance of victory altogether a few laps earlier. Having slowed his car on the back straight for fear of overtaking a car - a hot topic after 'liegate' in Australia involving Lewis Hamilton and Trulli - he was then struck from behind by rookie Buemi. Unlike the 2007 Japanese GP, when Vettel ran into Webber and eliminated both cars, he got away with it.

"I am very sorry for what happened," Vettel said. "To be honest I was just taking care. I didn't want to run into the car in front of me."

Buemi said he was simply "glad I didn't spoil his race".

Vettel led the field away to the green flag, and quickly showed just how much stronger the Red Bull RB5 was than the Brawn in the wet conditions. Within a lap he had pulled out four seconds on Button. That gap would grow to over 25 seconds across the remainder of the stint as Button became more occupied with Webber behind.

"I was pretty much always out of control," Button said. "I was just waiting for Mark to appear, not in my mirrors, but in front." 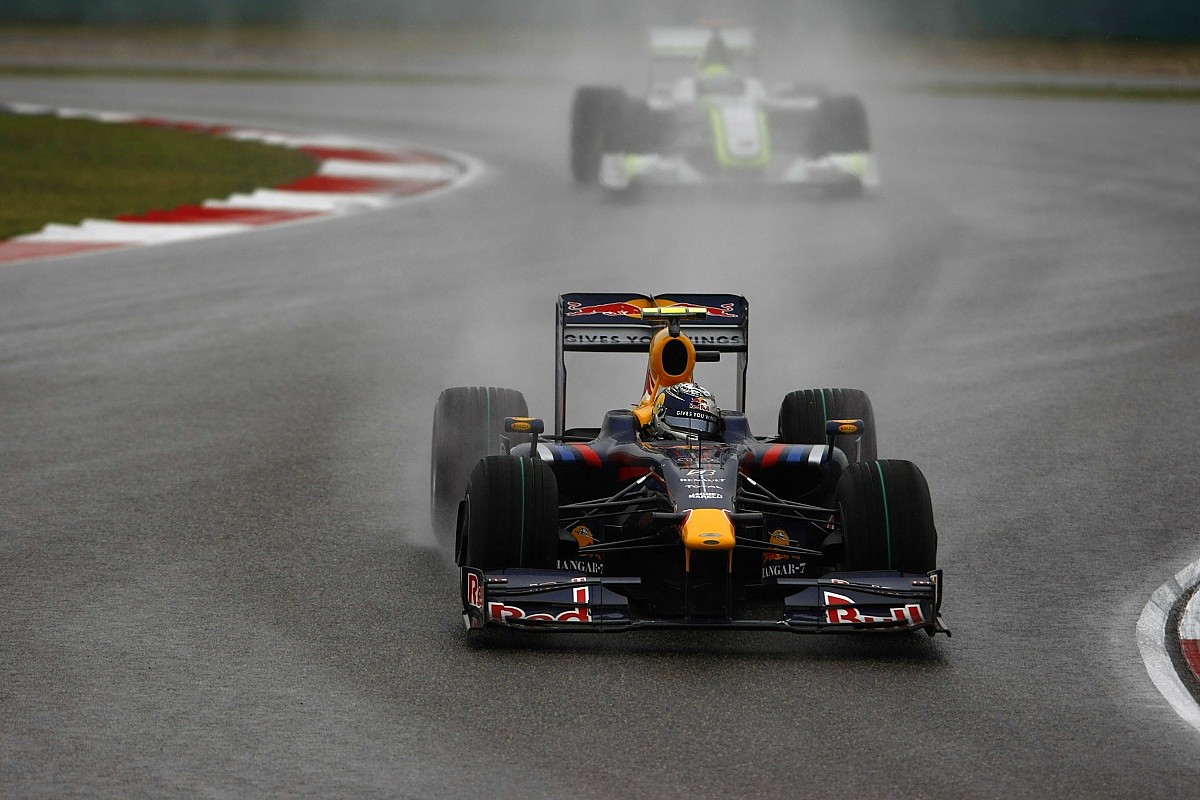 Webber finally got the jump on Button on lap 29, only to slide off-track two laps later and give the place back. Webber then passed Button for a second time in the space of four laps - quite the achievement looking back on 2009 with hindsight - before pulling out a 10-second gap, trading fastest times back and forth with Vettel, who was already some 18 seconds up the road.

After completing his final pit stop on lap 37, Vettel emerged just a couple of seconds behind Button. Not content to simply wait for the Brawn to pit, Vettel re-took the lead within four laps. Button came in one lap later, promoting Webber - who had also completed his final tyre change and fuel top-up - into second.

And in a foreshadow of the domination that would follow in the next four years, the Red Bulls just kept turning the screw in the final stint. Webber was able to whittle Vettel's lead down to 10.9 seconds come the chequered flag. More impressive was the fact both Red Bull drivers were able to run a second per lap faster than Button in third through the final stint, leaving the Brawn 44 seconds off Vettel in the final classification.

For all of the hubbub around Brawn's 'double diffuser' car, Red Bull had produced an emphatic beatdown of the field for its maiden victory, sewing up a one-two in the process.

"I am extremely happy - second time now in the wet I have won a grand prix," Vettel said, before joking: "Now we can have some more rain!"

But it was a statement that Red Bull could fight at the front.

"The car is fast already and able to compete with the best teams," added Vettel. "We will try and stay on top and make the final step to be the best team on the grid." 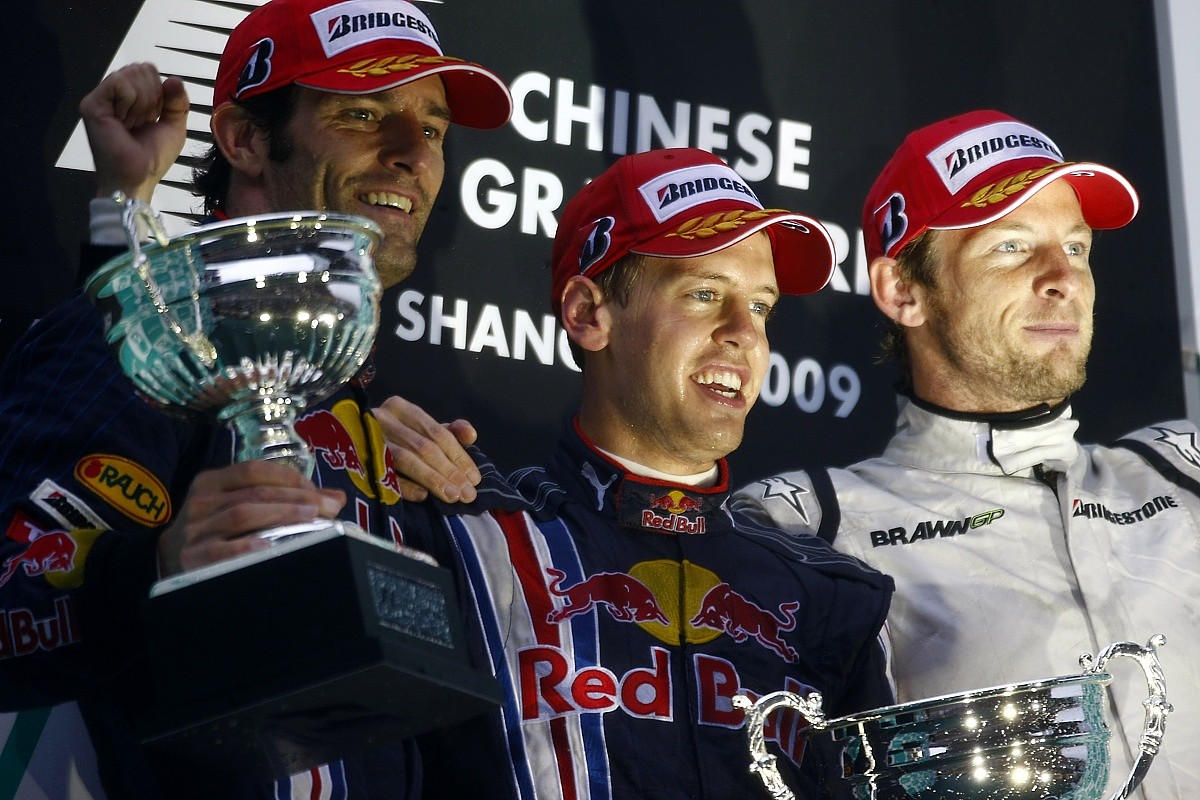 Webber was overwhelmed by the result in light of the driveshaft issue that had blighted its practice form.

"We were absolutely shitting ourselves that the cars wouldn't finish the race because every time we ran yesterday, they stopped," he said. "Today Sebastian and I could capitalise on a car that worked very well. It is an incredible result for Red Bull."

An incredible result for the Australian, too, whose career had looked in the balance at one stage after breaking his leg in a cycling accident during the off-season. Five months later, he was stood on the F1 podium for only the third time in his career.

For Christian Horner, Red Bull's team principal, the result marked his first-ever visit to an F1 podium - and left him with an acquired taste he would want to satisfy more in the future.

"Seeing the car cross the line for the first time in first position, seeing the joy and elation in everyone's faces, it was an amazing moment for the whole team - not just to win the race but a one-two finish," Horner said, looking back on the 10th anniversary of the race last year. "It was a massive thing to go and pick the constructors' trophy up, even though it was broken and missing one of its handles!

"I remember the feeling of getting on the aeroplane still smelling of champagne, just thinking that this moment has been so special, going back a Formula 1 winner, and that we'd need to feel this more times in our careers."

But China 2009 was the domino that set off the success. Or, as Horner called it, "the eureka moment" for Red Bull. It made clear this wasn't just a team in F1 for a good time. Red Bull could win, and win big. The success in the years that followed only proved that. 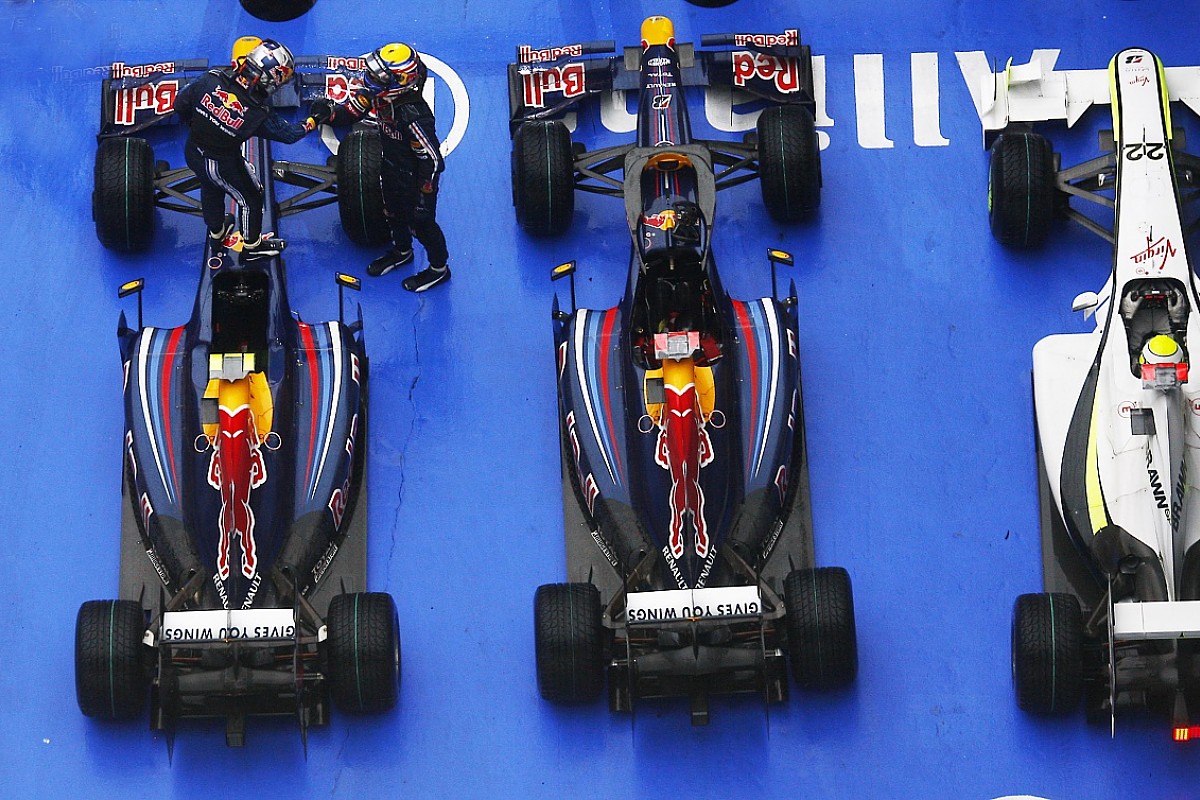