Rosberg X Racing emerged victorious in the Extreme E semi-finals in Senegal and will face the teams of Formula 1 world champions Lewis Hamilton and Jenson Button in the finale.

Reduced dust levels for the four-mile beachfront course in Lac Rose allowed for much closer racing than in the inaugural Saudi Arabia round.

That was typified in the first semi-final as the Rosberg X Racing crew of Johan Kristoffersson and Molly Taylor battled back to win against X44 and the Abt Cupra squad as the three cars were split only by 3s.

After topping the combined qualifying runs on Saturday, the X44 duo of Sebastien Loeb and Cristina Gutierrez drew the middle grid slot for the opening semi-final.

But it was the Abt Cupra machine, started by double DTM champion Mattias Ekstrom, on the outside that enjoyed the best launch as the cars ran down to the shoreline.

With Kristoffersson again suffering a poor getaway with masses of wheelspin, a trait carried over from Saudi, he opted for a massively wide line into the first right-hander.

As all three soon activated their so-called ‘hyperdrive’ power boost, positions were maintained for the initial sprint.

That prompted Kristoffersson to cut back and square off the opening corner to hug the inside line and demote Loeb for second place as Ekstrom sat comfortably in first place.

When Loeb fought back, the two battling inches apart, Kristoffersson firmly shut the door on his rival to allow Ekstrom to break into a defined lead that peaked at a little over 1s.

That gave Ekstrom track position as all three arrived in the driver change over zone, with an overnight rule amendment returning the minimum swap time from 40 to 45s.

He handed over to temporary team-mate Jutta Kleinschmidt, standing in for the sickness-stricken Claudia Hurtgen, but they were hampered by a radio failure. 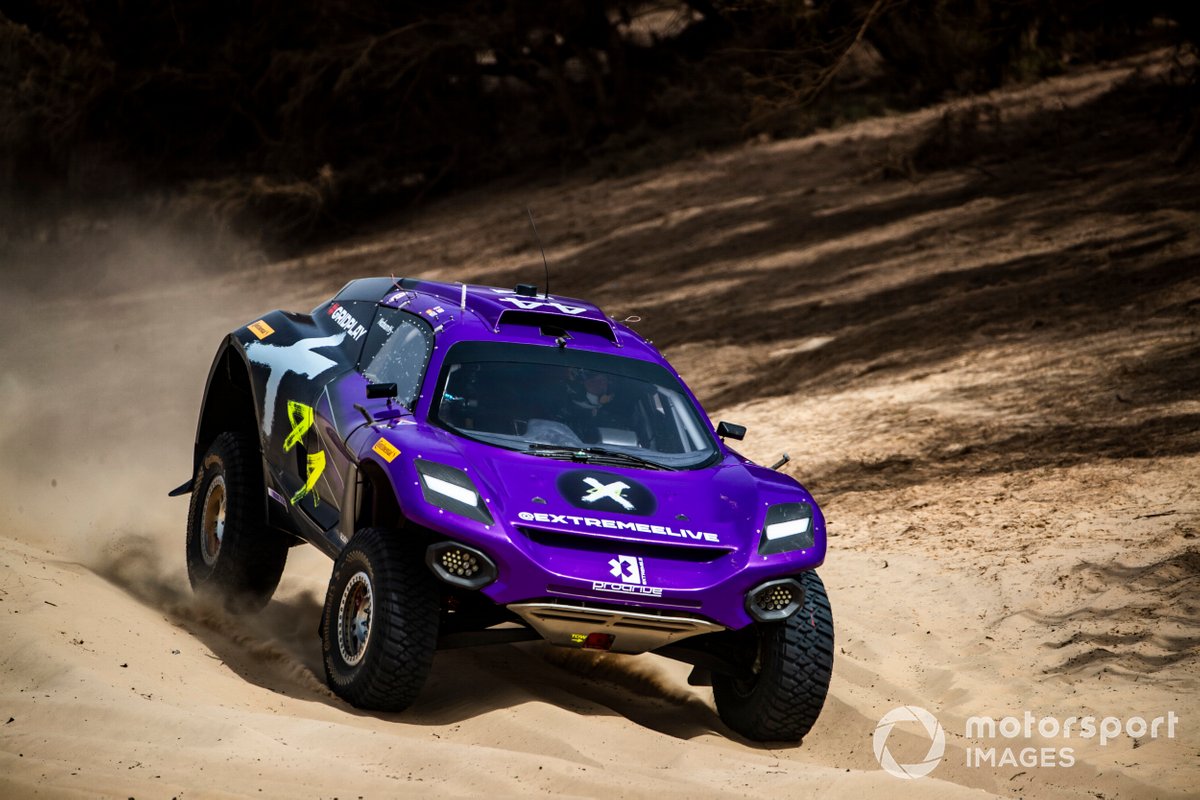 Unable to see the lights indicating when to resume, it left the 2001 Dakar winner unsure with Ekstrom gesticulating from the sidelines as X44 and Rosberg X Racing gained track position for the second lap.

Rosberg X Racing’s Molly Taylor was first to thumb the hyperdrive and steal an early march, which she narrowly held to the flag despite the immense pressure from Gutierrez.

Taylor maintained a lead of 2.262s to the finish despite the X44 machine evidently handling the bumps and ruts better to allow Gutierrez to give chase.

While Kleinschmidt resumed the better part of 3s in arrears and lost a further 2s by opting for a radically wide line through the second sector, she closed to just 0.9s off Gutierrez.

In the second semi-final, Jenson Button’s JBXE concern was the runaway winner.

Kevin Hansen, subbing for Button in Senegal, bolted out of the gate for an emphatic 22s lead at the driver change period to hand over to team-mate Mikaela Ahlin-Kottulinsky.

In totally clear air, she stretched the gap over Veloce Racing and Xite Energy Racing for a 30.95s triumph.

JBXE progresses into the finale alongside Veloce Racing while Xite Energy Racing misses out after a door-banging scrap between drivers Stephane Sarrazin and Christine Giampaoli Zonca.

Jamie Chadwick started the Veloce Racing machine but a fault kept activating the 30km/h pit limiter, which meant she remained in the clutches of Oliver Bennett.

Bristol-born Bennett pounced through the middle sector to lead at the pitstops, but Sarrazin fought back with an alternate line on Giampaoli Zonca through the second lap.

Sarrazin did suddenly slow as he too suffered pit limiter troubles, but he firmly blocked the Xite Racing machine and appeared to push Giampaoli Zonca off line to score a robust second place.